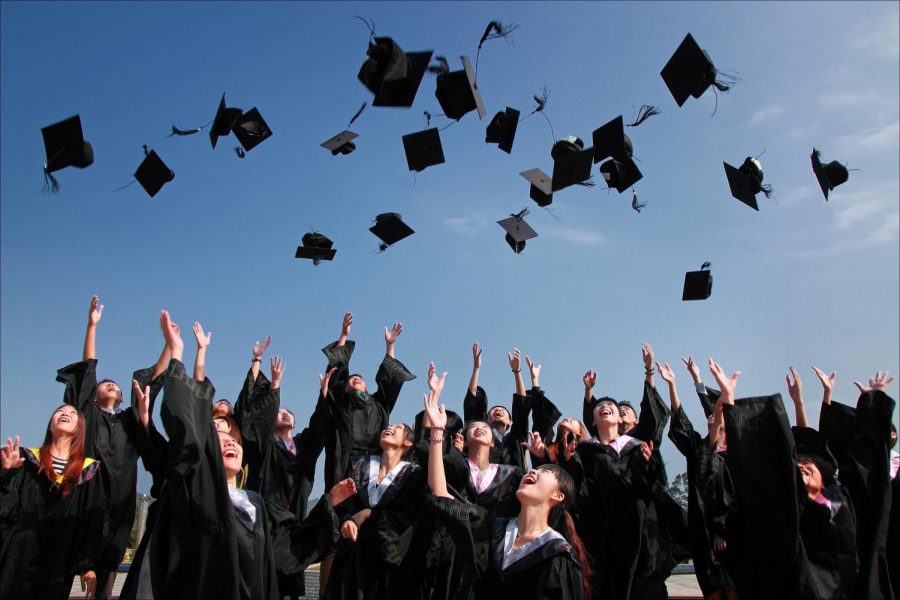 With UNI’s spring commencement ceremony canceled due to the current pandemic, many soon-to-be graduates have been left hanging.

The university announced the cancelation — together with the extension of online coursework through the summer — on March 18 in a campus-wide email. Those who had planned to participate in May’s ceremony were invited to walk with fall semester graduates in December. While the university assured students the absence of commencement would not hinder their ability to receive a diploma, disappointment swelled among graduating students.

“I am the first member of my family to graduate from college and my kids were pretty excited about it,” said Kristy Dempster, a non-traditional student studying psychology. “We will just have to have a celebration at home now.”

“At first I thought it was a little premature, canceling it so soon, but now, looking forward, it makes sense to me […] because to me this [pandemic] is only getting worse and worse,” she said. “But in the moment, I was a little heated.”

Within an hour of receiving the email announcing the ceremony’s cancelation, senior Kevin Kiesel started a Change.org petition titled “Allow commencement to the University of Northern Iowa Class of 2020.”

“As a student who pays a large amount of money for education and took pride in organizations as well as academics, it is not equitable to withhold these high achieving seniors from their accomplishments,” wrote Kiesel, a double major in supply chain management and organizational leadership who has been involved in nine organizations at UNI including Student Admissions Ambassadors, Summer Orientation Staff, BASIC Campus Ministry and several business groups.

His goal with the petition, Kiesel said, was to gauge the community’s response and present it to central decision-makers at UNI. Within two days, he had received over 350 signatures from graduating students, parents, siblings and friends alike.

Kiesel said he appreciated the university’s efforts in offering alternatives but believes the spring graduating class deserves its own in-person ceremony. He called for a postponement instead of a cancelation, with a separate commencement later this year once groups can safely gather.

“The class of 2020 — we were the largest class UNI has had in recent history — and so I think it’s important that UNI recognize that. We obviously have a lot of graduating seniors who have accomplished a lot, who have achieved a lot and who need to be recognized,” he said. “And there’s also a lot of logistical problems when you’re talking about two classes in one commencement ceremony.”

Kiesel’s petition received resistance from some students like Haley Bunnell, a senior English major who posted her response on Facebook.

“We should take as many precautions as we possibly can to stop the spread of this virus,” she wrote, “and if I have to give up some things in order to do so, no matter how bummed I am about that, I will.

Bunnell would have been the first in her family to physically walk across a stage to receive a college diploma.

“Obviously, the most important part is graduating college,” she said. “But I think I’m mostly upset for my family members, my parents. They were really looking forward to seeing me walk across the stage […] It’s mostly a symbolic thing.”

Since the initial cancelation on March 18, the university developed a plan for an online commencement celebration via MarchingOrder, the same technology company used at UNI’s in-person ceremonies. Students who opted to participate were contacted on April 16 and invited to submit a photo and personal message to be displayed on a slide with their name, degree(s), major(s) and applicable academic honors. The slides will be displayed on a website starting Thursday, May 7 at noon and be available for download.

Kiesel said he thought a virtual ceremony was a good idea and planned to participate, citing the significance of graduating alongside one’s class and gaining closure at the appropriate time.

“I look at college as a journey,” he said. “That journey involves academic classes, your student organizations, your on-campus activities, your off-campus activities, the memories you make. All that is wrapped around the people that are related to you, and a lot of those people that you relate to are usually people in your class, graduating at the same time. You see them at the beginning of orientation, and then you see them at commencement and ending that. And I think that commencement is an important part of closing that chapter of your journey.”

For the spring class of 2020, closing that chapter will look different than expected. They won’t don a cap and gown, sit in a crowd of their classmates and friends, walk across a stage, receive a physical diploma, shake the hands of their university officials, take photos with friends and family on campus and say final goodbyes.

Unless the university organizes a separate ceremony earlier in the year, students seeking those experiences will have to wait until December.

For some students like Carter, returning to campus in the fall will not be possible. By that time, Carter will be at a different school pursuing a master’s degree, some students will have full-time jobs, others will have moved out of state and for many, the memories of college and excitement of graduation will have faded.

Support for seniors has abounded across social media platforms, with users posting their own senior photos, both past and present. Around the world, graduating students are grieving the loss of not only their commencement, but their final days of school.

“You don’t even get to tell your friends goodbye,” Carter said. “I think that’s the most heartbreaking thing: I have friends who are going off to start jobs next year, and I never got the chance to go wish them luck or to send them off. […] Yeah, I’m missing commencement, but we’re also missing the last 50-some days of our senior year.”

“My time at UNI was cut short,” Keisel said. “I don’t think that my experiences were taken away from me; I just think it was changed. I think a lot of us are going through a very difficult time and it would be selfish for me to ask for that back because everyone is going through this […] So I guess my lasting impression of this is, you know, it is sad but we’re a part of history, and we’re going to have to look back on this and shake our heads and just know that everything’s going to be alright and we’re going to move on. It’s just a tough reality.”

Despite the unprecedented conclusion to his senior year, Kiesel refused to let the situation tarnish the rest of his college career.

Students who would like to participate in UNI’s online commencement celebration and haven’t been invited to do so should email [email protected] by Monday, April 20. Those planning to walk in December should complete the Fall 2020 Commencement RSVP that will be available on MyUniverse from May 4 through October 15.