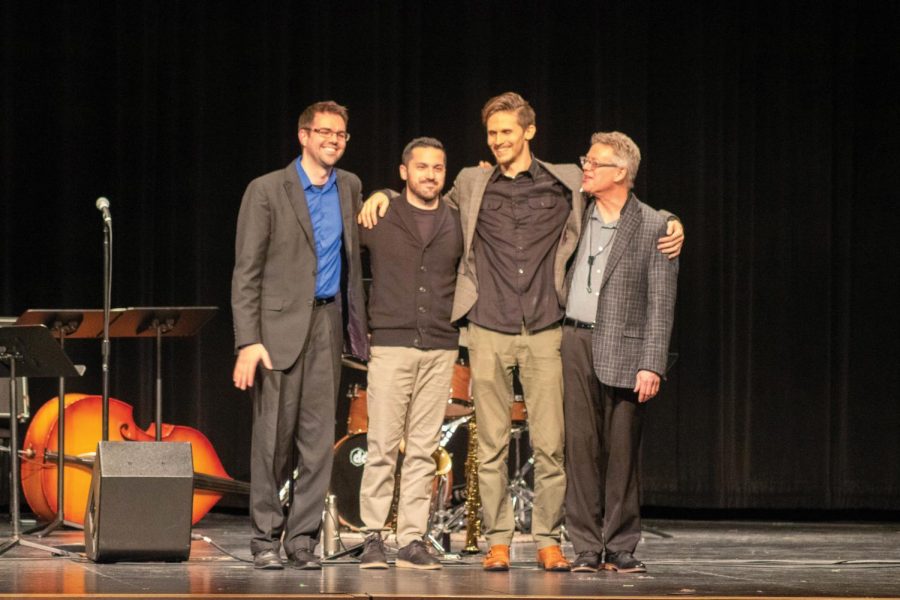 After months of silence, the Great Hall at Gallagher Bluedorn Performing Arts Center was once again filled with music on Thursday evening—but no one was there to hear it in person.

GBPAC this week kicked off a new series of livestreamed concerts called Local Legends: Live from Gallagher Bluedorn. The series, which will feature local musicians, will continue on Thursday evenings at 7 p.m. for the rest of the semester.

Although audience members will not be permitted to attend in person due to concerns related to COVID-19, the weekly concerts will be livestreamed for free on the GBPAC YouTube and Facebook pages.

GBPAC Executive Director Steve Carignan stated that the goal of the concerts is not only to offer access to live entertainment, but also to promote and honor local musicians.

“This show celebrates local artists and puts them where they belong—onstage at the Gallagher Bluedorn,” he said on Thursday night’s livestream.

Merz, who serves as the band’s composer and saxophonist, thanked the virtual audience for tuning in.

“It’s so great to actually be able to play with people again,” he said. “I think it’s been about 6 months since we’ve played together.”

Merz was joined onstage by fellow UNI professor Michael Conrad as the band’s pianist, along with bassist Drew Morton and drummer Dave Tiede. Except for Merz (who needed his mouth free for his instrument), the band members wore masks and were seated in a socially distanced arrangement.

The band performed songs from their most recent album, “While We Wait,” released in April. Among the pieces was the memorably-titled “Barfin’ Up Rainbows, Poopin’ Out Sunshine,” which Merz described as “relatively appropriate to where we’re at right now.”

“We are Christopher’s Very Happy. Band., and hopefully… that’s coming across,” Merz said with a smile.

More than 30 people watched the concert via YouTube, and more than 60 via Facebook. Many attendees left comments on the livestream, congratulating the musicians and commenting on the high-quality audio and multiple camera angles, which captured close-ups of each musician.

Responding to these comments, GBPAC officials indicated that funding from the Friends of the Gallagher Bluedorn had helped purchase a new camera setup for the concert series.

“We’ve been fortunate to have a strong Friends group (Friends of the Gallagher Bluedorn) who has invested in our building,” officials wrote. “A big round of applause to that group for the incredible audio and video quality… and, of course, another round of kudos to our tech team. They make magic happen!”