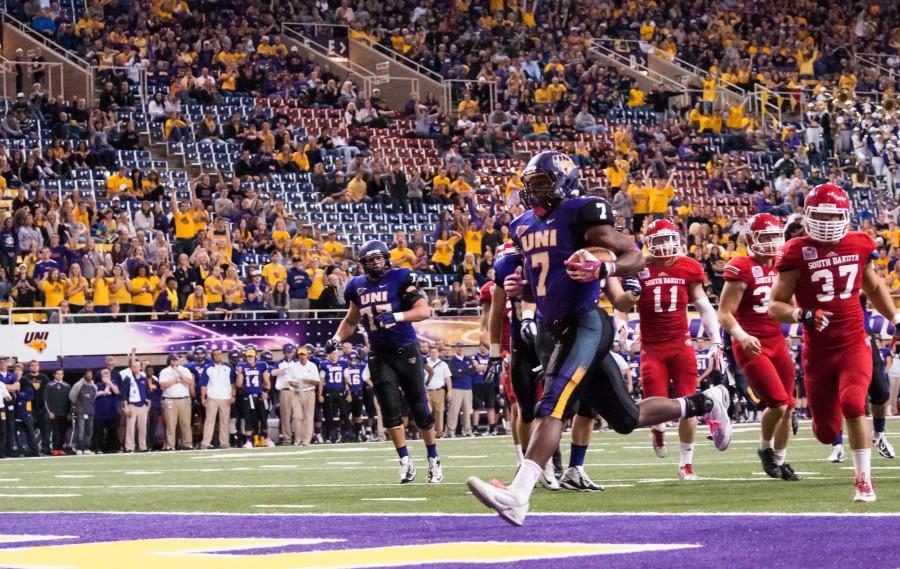 As a high schooler, he was overlooked by a lot of schools. Now David Johnson has played in the Pro Bowl and is one of the top running backs in the NFL.

Johnson’s athletic journey began at Clinton High School, just two and a half hours away from the campus of the University of Northern Iowa. There Johnson emerged as a standout in basketball, track and field and football. On the football field, Johnson broke nearly every offensive record the school had, while also qualifying for state in basketball and track. Despite all of this success in high school, he largely went unrecruited. Only two schools offered Johnson a scholarship to play football: Southern Illinois and Northern Iowa.

Johnson decided to play college football at UNI, and after being redshirted as a freshman in 2010, he had a solid season as a freshman in 2011, rushing for 822 yards and nine touchdowns. He broke the 1,000 yard barrier for the first time in 2012, finishing with a total 1,021 to go along with 13 touchdowns. After another 1,000 yard season as a junior, his true breakout season came as a senior in 2014. In his final season at UNI he rushed for 1,553 yards to go along with 17 touchdowns. He also broke multiple school records as a senior, including all-purpose yards in a career, rushing yards in a career, and rushing touchdowns in a career.

After a successful career at UNI, Johnson entered the 2015 NFL Draft. When the 86th pick rolled around mid-way through the third round, Johnson lived the dream of so many young men around the country. The Arizona Cardinals drafted Johnson, and he went into training camp his rookie season as the 4th string running back. Despite being a long shot to see much playing time, Johnson made a splash in his first game, catching a 55-yard pass for a touchdown. By the end of the season, Johnson had earned the role of the Cardinals’ starting running back.

Johnson’s breakout season came in 2016. In his first year as a full-time starter, Johnson accounted for at least 100 yards from scrimmage in 15 consecutive games. At the end of the season, Johnson had racked up 1,239 rushing yards with 16 rushing touchdowns, as well as 879 receiving yards with four receiving touchdowns. After the season, Johnson was named 1st Team All-Pro. Media members around the country chose Johnson as one of the two best running backs in the NFL. He was also selected to participate in the 2016 Pro Bowl.

Johnson has had some injury struggles since this breakout year, but has still been a solid option in the backfield for Arizona. This upcoming season, Johnson will be wearing a different jersey for the first time in his professional career, after being traded to the Houston Texans in the offseason.