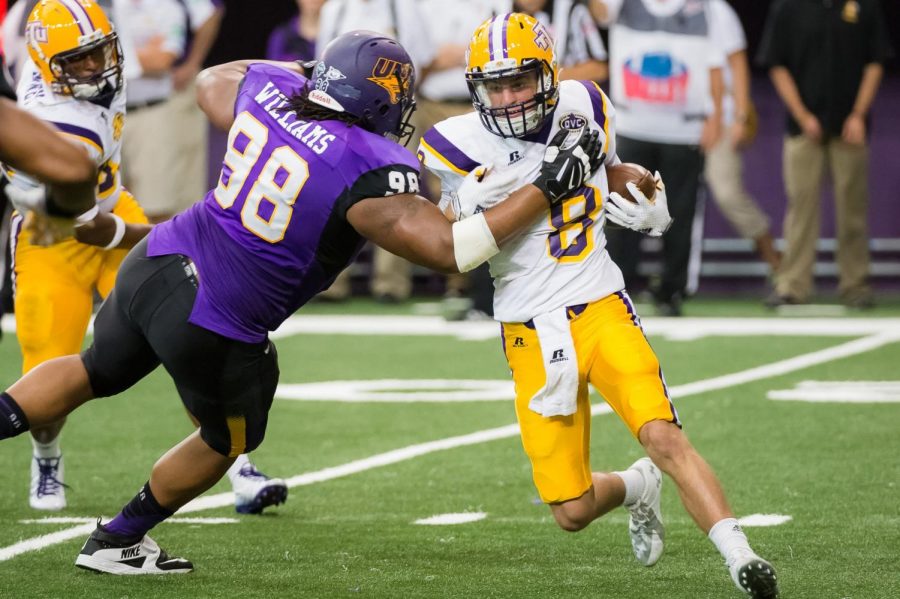 Williams during his time at UNI. He was a two-time all-conference selection and an anchor on the Panther defensive line while donning the Purple and Gold

After being undrafted coming out of the University of Northern Iowa, defensive lineman Xavier Williams was able to become a Super Bowl champion last year with the Kansas City Chiefs.

Williams was born in Kansas City, Missouri, and began his football career at Grandview High School. He was a first-team all-conference selection and was named to the Suburban Mid-Six team in 2009. Not only was he a great football player, but he also was a wrestler who qualified twice for the state tournament in Missouri while in high school.

Williams decided to attend the University of Northern Iowa post-high school. He played as a defensive tackle for the Panthers from 2010-2014 and was named All-Missouri Valley Football Conference First team honors in his final two seasons. His dominant play also granted him an opportunity to play in the East-West Shrine Bowl, a game in which the best players in college football play to show their talents to NFL teams. Williams performed well in the game, but unfortunately he was still not drafted.

After going undrafted in the 2015 draft, the Arizona Cardinals signed Williams. He played for the Cardinals for three seasons but after the third season, he left Arizona for a better contract offer from the Kansas City Chiefs which the Cardinals could not match. In just his second season with the Chiefs, Williams was part of the Chiefs’ playoff run and is now a Super Bowl Champion.  Throughout his career, Williams has 83 tackles, three sacks, and three forced fumbles.

After winning the Super Bowl with the Chiefs last season, Williams became a free agent and visited the Tampa Bay Buccaneers before working out for the New England Patriots. On August 22nd, 2020, Williams signed a contract with the Patriots.  He will be looking to repeat as a Super Bowl Champ this season in New England.