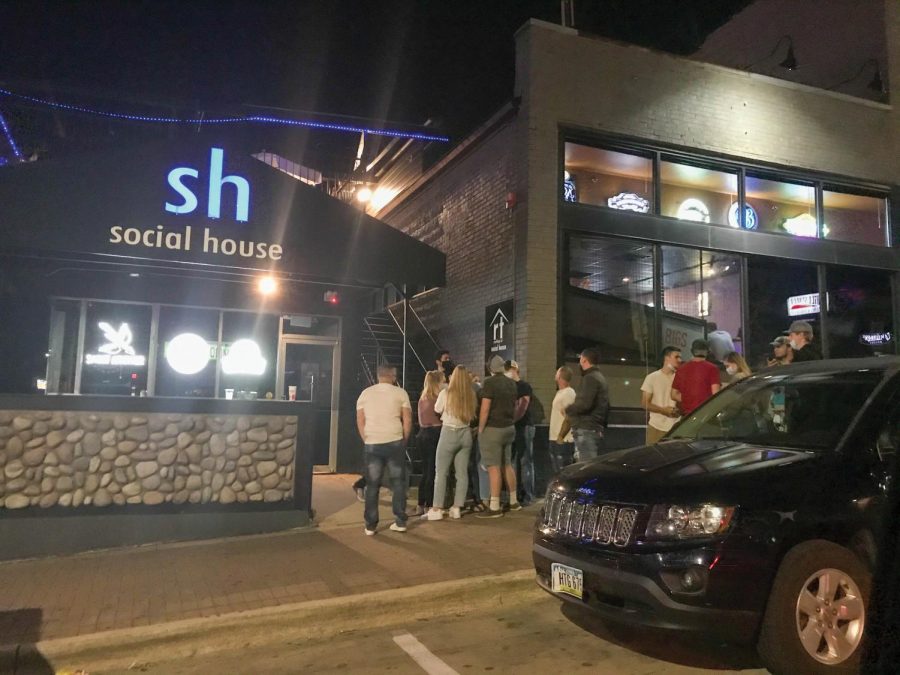 On Aug. 27, Governor Kim Reynolds signed a proclamation ordering bars to close in six counties in Iowa: Black Hawk, Dallas, Linn, Polk, Story and Johnson. The proclamation at that time was to be in effect until Sept. 20.  On Sept. 15, however, Reynolds announced that the bars of four out of the six counties — including Black Hawk — could open effective after 5 p.m. on Wednesday, Sept. 16.

However, bars in Story and Johnson counties, which house Iowa State University and the University of Iowa, respectively, are still closed. This means that while UNI students are able to visit the bars now, ISU and U of I students will not be able to do so, at least until Sept. 27.

The UNI campus has a mixed response to this early opening. While some students interviewed by the Northern Iowan are relieved to have some sort of normal back, others are worried about the spike in COVID-19 cases that this opening may bring.

“I personally do not support the bars reopening because it’s leading to the spikes in positive COVID cases,” said Megan Studer, a junior digital media production major. “If you drive down the Hill, you’ll see tons and tons of students crammed together, not social distancing and not wearing masks. I understand the bars needing to be open from an economic standpoint, but I believe the health and safety of people is more important.”

Studer added that although the bars are taking safety precautions “to a certain extent,” she does not feel that the efforts are sufficient.

A UNI sophomore who asked to remain anonymous described his trip to popular bars Sharky’s and Social House on Friday, Sept. 18.

“They didn’t do very well in social distancing,” he said. “You could go wherever you wanted and be with a big group of people.”

He clarified that Sharky’s “was pretty good” about enforcing public health measures such as wearing masks when not seated at a table and prohibiting dancing.

“They told everyone the rules when they came through the door,” he said.

However, he said that at Social House, public safety measures were not listed or enforced, as far as he saw. He also noted that while very few people were standing outside Sharky’s, “everyone was outside on the top floor at Social.”

Sharky’s, Social House, Little Bigs and Octopus did not respond to requests for comment from the Northern Iowan.

The College Hill Partnership has stated in a Wednesday press release that “the majority of locally owned businesses on College Hill are committed to the College Hill Promise to keep the community safe.” The release also asked the people in Cedar Falls to observe the mask requirement and social distancing rules.

Studer said she feels the social benefits of reopening the bars do not outweigh the public health risks.

“Bars are a luxury, not a necessity. While I do think everyone deserves the true ‘college experience,’ unfortunately, that needs to be put on halt due to these circumstances. There are plenty of other ways to have fun and safely socialize,” she said. “People are going to continue to complain about being online and having to wear masks, yet they are the ones preventing us from getting to a state of safety.”

When asked about the necessity of reopening the bars, the UNI sophomore who went out on Friday night said, “I don’t think it’s important to open the bars up, but it may be a good step to getting back to normal.”

During the brief closure of the bars, however, other students had a change of heart as they came to terms with the reality of the virus.

“I originally thought it was fine. I went to the bars when school first opened,” said a UNI senior who asked to remain anonymous. “However, I had a COVID scare where I felt horrible. So, now I’m definitely taking this COVID thing more seriously.

“I do not like the idea of the bars opening,” the senior added. “We cannot expect college students to (not) go to the bars if it’s legal. We have to think when enough is enough and our safety is more important.”