Sin and sweat in ‘The Devil All The Time’ 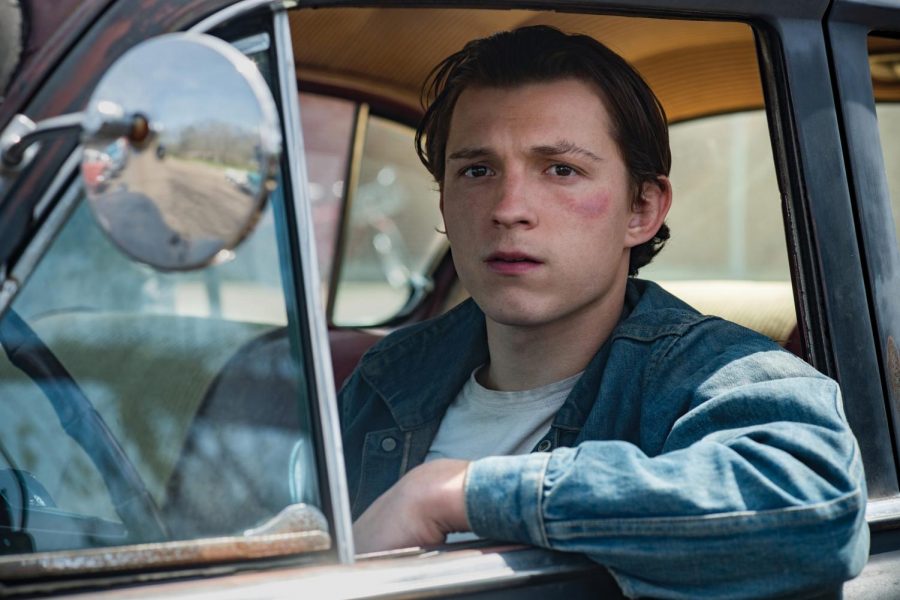 What do you get when you combine two orphans by parental suicide, a serial-killing couple, a pedophile preacher, a corrupt sheriff and a town full of zealots? You get the darkest and most disturbing movie of the year.

The newest Netflix movie, “The Devil All the Time,” is a sprawling tale of faith and violence that spans multiple generations within the Appalachian heartland of America.

The story opens in 1945 as Willard Russell (Bill Skarsgård) returns home to West Virginia from the Japanese front. He’s seen and done unspeakable things that he can only share with God. Willard has a young son named Arvin, whom Willard teaches that you must answer violence with violence. When the matriarch falls ill with cancer, Willard goes to extreme measures to test his faith in God and beg for her healing. These crazed acts by Willard leave a large impact on Arvin that resonates long after.

After this brief segment, we jump years later and are introduced to the rest of the lowlifes and degenerates. A now teenage Arvin (played by Tom Holland) lives with his grandparents and Lenorrah, his pseudo-half-sister. Lenorrah’s mom died at the hands of her crazed preacher father when she was just a baby. Almost like a spiteful trick by the universe, a new young preacher comes into town with his eyes set on Lenorrah, even though she’s only fifteen-years-old. Stalking the country roads is the serial killing couple of Carl and Sandy, who like to take pictures of their victims before they cut them up. And then there’s Sandy’s sheriff brother, Lee, who isn’t afraid to bend the laws to enact his ideas of justice.

There sure is a lot of movie within this movie.

Director and co-writer Antonio Campos takes all his separate characters and places them at different corners within the Bible-belt setting.

Similar to how Quentin Tarantino constructs his stories, Campos gives each character their own slice of the story and over time begins to intertwine them. But even at 140-minutes, “The Devil All the Time” is too short to fit in all that it wants to deliver. The sheer amount of content it tries to cover forces the pacing to be rushed and the emotional payoffs to be underwhelming.

Arvin is our only real character that we get enough time to make a connection with. The rest of the cast fill supporting roles, with some getting some standout scenes and others falling by the wayside.

What also may or may not turn off viewers is the incredibly high amount of weight and ferocity put into the material. Campos doesn’t allow for a single moment of levity and only answers misery with more misery. The amount of physical and emotional torture inflicted upon these characters becomes too much at times, almost like Campos is testing his viewers to see how much they can take.

But there still is a lot of good work here that deserves praise. Campos imbues each scene with a piercing atmosphere of terror and menace. Much of the sweat-infused imagery – shot in beautiful 35mm – instills feelings of dread that last beyond the credits. The scratching string-filled score by Danny Bensi and Saunder Jurriaans also does a lot to darken the mood.

There’s also a slew of strong performances throughout the all-star ensemble.

Tom Holland plays against his Spider-Man type and turns in a surprisingly dark and heartfelt performance. Gone is his boyish charm as he gets his hands dirty on more than one occasion.

Robert Pattinson – the next Batman – plays our lustful preacher. With his bright blue ruffled outfit and twangy Southern accent, Pattinson is a scene-stealer that you just can’t get enough of.

Bill Skarsgård does a lot with his opening segment as he explores PTSD, faith and fatherhood with his grounded performance.

While somewhat underutilized, Eliza Scanlen as Lenorrah and Riley Keough as Sandy are great. Each brings emotional weight to their conflicted characters.

“The Devil All the Time” is a mean and nasty film that bites off a lot more than it can chew. It might not work all the time, but the directional skill by Campos and the sheer talent from the cast keeps this ultra-depressing story from falling completely off the tracks.