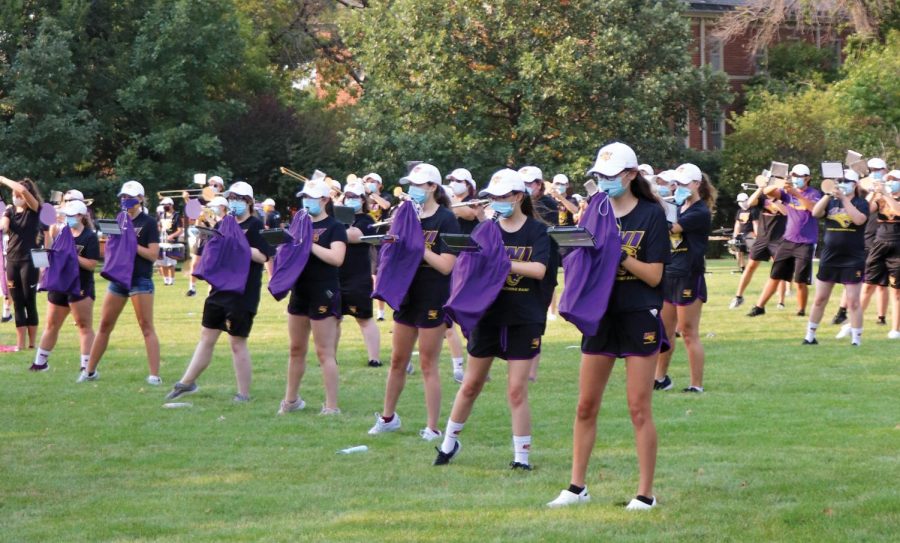 The Panther Marching Band, affectionately known as “The Pride of Panther Nation,” held their first live performance of the season on Friday Sept. 25 at 4:30 p.m. Justin Mertz, the band’s director, said before the event “The whole PMB is very excited to be able to make music together.” Viewers could hear that excitement in their music and with how they interacted with the audience after the performance.

The band has had to make many adjustments for COVID-19. Not only do the band members stay six feet apart, they also wear masks, make special wraps to cut down on the air coming from the instruments and use more static visuals in place of marching around the field.

PMB is also an academic course offered at UNI so they have course objectives and lessons. Their main course objective is to serve the community and the students at UNI with music. While it has been difficult not performing in the dome during football games, the band is still preparing and performing for audiences.

Dr. Mertz also said “As the band’s director I am so proud of the students and staff for their perseverance, grace, and adaptability during one of the most atypical semesters we’ve all ever had. It is amazing to see almost 300 students work hard toward making our community a safe and constructive place to be for all of our members.” The band is beloved by, not only the Cedar Valley community, but also by its surrounding communities.

James Mons, a trumpet player for the PMB said “I felt that the PMB was really well received! Live music is something that’s been missing from the world for a while and it felt really good to be able to provide that to people again with the PMB!”

While the band is always well received by patrons, it is always exciting to see people smile from music made by this ensemble. For more information on future concerts and performances, visit the Panther Marching Band Facebook page.