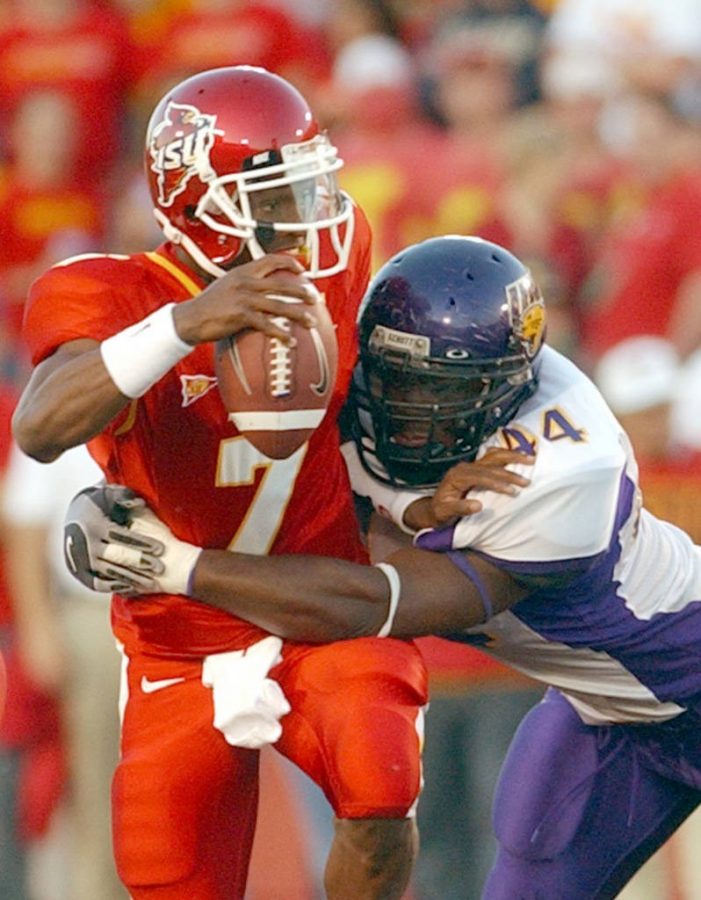 On Sept. 30, 2006, The Northern Iowa Panthers traveled to Jack Trice Stadium in Ames, Iowa for a matchup with the Iowa State Cyclones. The Cyclones participate in NCAA Division I-A, one level higher than the Panthers. It was a warm evening in Ames, with the temperature reading 75 degrees at kickoff, but also windy, with gusts ranging from 20-25 miles per hour throughout the night. It would be a big test for the Panthers to take on a bigger school, and over 55,000 fans were in attendance to watch it take place.

Iowa State won the coin toss and elected to receive the opening kickoff of the game. They set the tone early, putting together a 14-play, 80-yard drive that was capped off when fullback Ryan Kock ran in a touchdown from one yard out, giving the Cyclones an early 7-0 lead. Not to be outdone, the Panthers responded by putting together a 14-play drive of their own, resulting in quarterback Eric Sanders finding wide receiver James Lindgren for an eight-yard touchdown. This would tie the game at 7-7 going into the second quarter.

The Cyclones ensuing drive started well enough when they converted on 3rd and 4 for a fresh set of downs. However, on the next play UNI cornerback Dre Dokes would intercept a pass and return it 46-yards for a Panther touchdown, giving them their first lead of the night, 14-7. The Panther defense shut down the Cyclone offense, recording two sacks on the ensuing possession and getting the ball right back to the UNI offense. Northern Iowa drove down the field once again, finding the end zone via a five-yard run from running back Corey Lewis. This gave the Panthers a 21-7 lead that they would take into halftime.

UNI got the ball to begin the second half, but their drive stalled out just shy of midfield and they had to punt it away. Both teams traded punts until the Cyclones managed to put together another scoring drive late in the third quarter. Quarterback Bret Meyer found wide receiver Todd Blythe for a 22-yard touchdown to draw the Cyclones within seven points going into the fourth quarter.

To begin the fourth quarter, the Panthers had the ball, but once again they stalled out and were forced to punt. Punter Adam Kos sent away a punt that was fielded by wide receiver Ryan Baum at the 35-yard-line. Baum managed to return the punt the full 65 yards for an Iowa State touchdown. This special teams gaffe by the Panthers tied the game at 21-21. The Northern Iowa offense finally got some momentum going on the ensuing possession. They came up short of the end zone, but Kicker Brian Wingert knocked in a 43-yard field goal, giving the lead back to the Panthers. The UNI defense forced a fumble on the next possession, and the offense got into field goal range once again. Wingert knocked in another clutch field goal, this time from 32 yards to give the Panthers a 27-21 lead.

Late in the fourth quarter, the Cyclones knew this was their last chance. They came out swinging, and a couple big plays combined with some Northern Iowa penalties resulted in a quick, 74 yard drive. Iowa State finished off the drive when Meyer connected with wide receiver Jon Davis for a 16-yard touchdown. The extra point gave the Cyclones a 28-27 lead with just one minute left to play. The Panthers quickly drove down the field, getting to the Iowa State 42-yard line. With just six seconds left on the clock, Wingert had a chance to make his third field goal of the night and be the hero. The 51-yard try had a chance, but missed wide right, and the Cyclones came out on top, 28-27.

Despite the loss, it was still a good game for the Panthers, who on paper should have been very outmatched. Quarterback Eric Sanders completed 23 of 29 pass attempts for 158 yards and one touchdown, while also not throwing an interception. Running back Corey Lewis led the rushing attack, carrying the ball 19 times for 88 yards and a touchdown. Wide receiver James Lindgren was the leading receiver, catching the ball seven times for 73 yards and a score. Linebacker Brannon Carter led the defense, finishing with nine tackles, including one for a loss. Kicker Brian Wingert, while unfortunately missing what would’ve been the game winner, kept the Panthers alive with two clutch field goals in the fourth quarter. With the loss, the Panthers fell to 2-3 on the season.