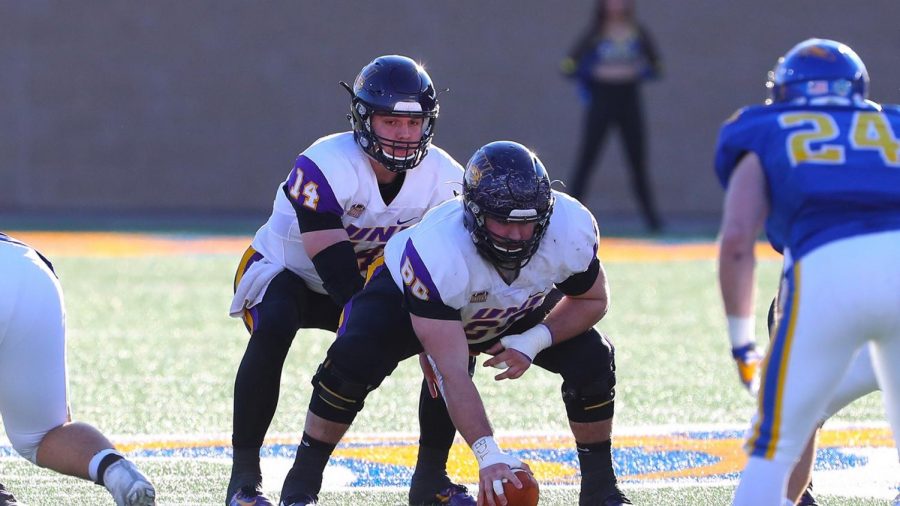 On Oct. 14, 2017, the Northern Iowa Panthers traveled to Dana J. Dykhouse Stadium in Brookings, South Dakota, home of the South Dakota State Jackrabbits. The Jackrabbits came in as the seventh ranked team in the nation, whereas the Panthers were not even in the top 25. It was a dreary, chilly afternoon, with drizzles of rain accompanying a 48-degree temperature.

UNI won the coin toss and elected to defer their choice to the second half. The Jackrabbits received the opening kickoff, but quickly went three and out. The Panthers got the ball, but followed suit, going three and out themselves. Punter Sam Kuhter sent a punt to Jackrabbits wide receiver Marquise Lewis. As Lewis was attempting to catch the punt, he was hit by UNI defensive back Nikholi Jaghai, forcing a fumble that was recovered by UNI long snapper Joe Friedrich. The Panthers took advantage when kicker Sam Drysdale knocked in a 41-yard field goal, giving them a 3-0 lead.

On the ensuing possession, South Dakota State made another error when quarterback Taryn Christion’s pass was intercepted by defensive back Elijah Campbell. He returned it just three yards shy of the endzone, and two plays later, running back Christian Jegen punched it in for a touchdown from one yard out. After another defensive stop and another touchdown, this time an 11-yard run from running back Marcus Weymiller, the upset-minded Panthers ended the first quarter leading 17-0.

The Jackrabbits roared back to start the second quarter, leading a 73-yard drive that resulted in Christion finding wide receiver Jake Wieneke for an 11-yard touchdown. A missed extra point made the score 17-6. Northern Iowa managed to put together a scoring drive with Weymiller running in a score from 15 yards out. This gave the Panthers a commanding 24-6 lead going into the half.

It was a quiet third quarter for both teams offensively, but with less than a minute to go the Jackrabbits offense exploded with two long passing plays. Christion connected with tight end Dallas Goedert on two consecutive plays, one for 57 yards, and one for a 19-yard touchdown. SDSU attempted a two-point conversion in an attempt to counteract the missed extra point from their previous touchdown. However, the conversion attempt failed, and the Panthers held a 24-12 lead entering the final quarter of play.

The Panthers got the ball to begin the fourth quarter, and they took advantage, driving down the field and culminating when quarterback Eli Dunne found wide receiver Daurice Fountain for an 18-yard touchdown, taking a commanding 31-12 lead. The UNI defense forced a turnover on downs, and Dunne threw for another touchdown, this time to wide receiver Isaiah Weston. This essentially sealed the deal, as the Panthers took a 38-12 lead with just 8:21 to play. The Jackrabbits did manage to score another touchdown, but the Panthers came away with the convincing upset victory, 38-18.

The unranked Panthers came out strong early against the seventh ranked Jackrabbits and didn’t slow down. Quarterback Eli Dunne completed 13 of his 22 pass attempts for 169 yards and two touchdowns. Running back Marcus Weymiller had a great day on the ground, running the ball 42 times for 170 yards and two touchdowns. Wide receiver Daurice Fountain was the leading receiver of the day, catching four passes for 74 yards and a score. Linebacker Jared Farley was the leading tackler, finishing with seven tackles including one for a loss. With the win, UNI moved to 3-3 on the season.