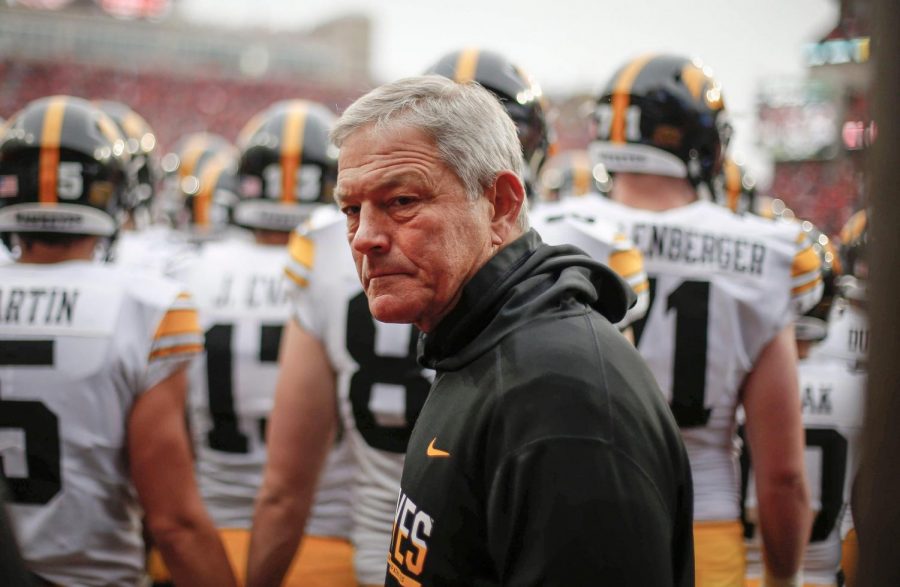 Iowa's head coach Kirk Ferentz is the longest-tenured Power 5 coach in the country and the winningest coach in Iowa history. The Hawkeyes began the 2020 season with a 24-20 road loss to Purdue.

After a prolonged absence by the Big Ten Conference to start their football season, 2020 play was finally underway on Saturday, Oct. 24. Six Big Ten games were played in the inaugural week of football for the conference following an extended delay in the start of the season, caused by complications relating to the COVID-19 pandemic. Initially, the conference had said that they were going to forgo all fall sports and move them to the spring, including the most lucrative sport, football. But following weeks of disputes, arguments and talks between member universities, alumni, parents and student-athletes, the conference was able to work out a deal to play an eight game season with games coming only between other Big Ten schools.

The 2020 season got underway on Friday, Oct. 23 with a game between Wisconsin and Illinois, with the former taking the game in a 45-7 beatdown. The remaining twelve conference teams were slated to begin play on Oct. 24, with the Iowa Hawkeyes starting their season on the road against the Purdue Boilermakers in West Lafayette, Ind.

The Hawkeyes were coming off of a 10-3 season in 2019, including a resounding victory over Southern California in the Holiday Bowl last December. But following numerous graduations and NFL departures by several key players, along with an offseason scandal regarding racial profiling from members of the coaching staff, brought a lot of questions into the 2020 season for Iowa. Their opponent, Purdue, was coming off a disappointing 4-8 season last year and was looking to start their new season off on the right foot.

The two teams started off the game with three-and-outs on their first possessions. On the second possession for Purdue, they got things moving. In a nine play, 66 yard drive, the home team was able to punch the ball into the endzone on a nine yard touchdown pass from quarterback Aidan O’Connell to wide receiver David Bell.

The Hawkeyes got the ball back near the start of the second quarter, and were able to move the ball quickly on a five play scoring drive, capped off by a one-yard touchdown run by Iowa quarterback Spencer Petras to knot the score at 7-7. The Iowa defense forced another three-and-out and quickly got the ball back for the offense. The Hawkeyes again had no trouble moving the ball, going 73 yards and taking a 14-7 lead after a one-yard touchdown run by running back Mekhi Sargent. Purdue bounced back with an answer of their own on their next possession, as O’Connell found Bell for their second touchdown connection of the game, bringing the score back to a tie at 14 apiece.

Iowa would tack on two field goals with Purdue adding one of their own in the third quarter, as the Hawkeyes clung to a 20-17 lead. With a three-point lead and possession of the ball, Iowa was on the Purdue side of the field and were looking to seal the game with another score. But a run play by Iowa saw Sargent fumble the ball away to the Boilermakers, giving them a shot. Purdue took full advantage of the gift they had been given and marched down the field 72 yard on twelve plays capped off by a third connection from O’Connell to Bell, putting the home team up 24-20 with about four minutes left in the game. The final Iowa possession had nothing going for the visitors, as they turned the ball over on downs and conceded the game to Purdue, with a final of 24-20.

While Iowa definitely had a shot to pull this one out, they were hurt by their own mistakes. The Sargent fumble was perhaps the most costly, but the team as a whole racked up ten separate penalties costing them 100 yards in the game, and failed to score in the red zone twice, instead settling for two field goals. A hard-nosed, grind-it-out style of game would be the best way to describe this one, with the home team edging out the close victory in the 2020 Big Ten opener for the two teams. Iowa will return home against Northwestern on Oct. 31, with Purdue hitting the road against Illinois.