PMB takes a “Trip to the Movies” 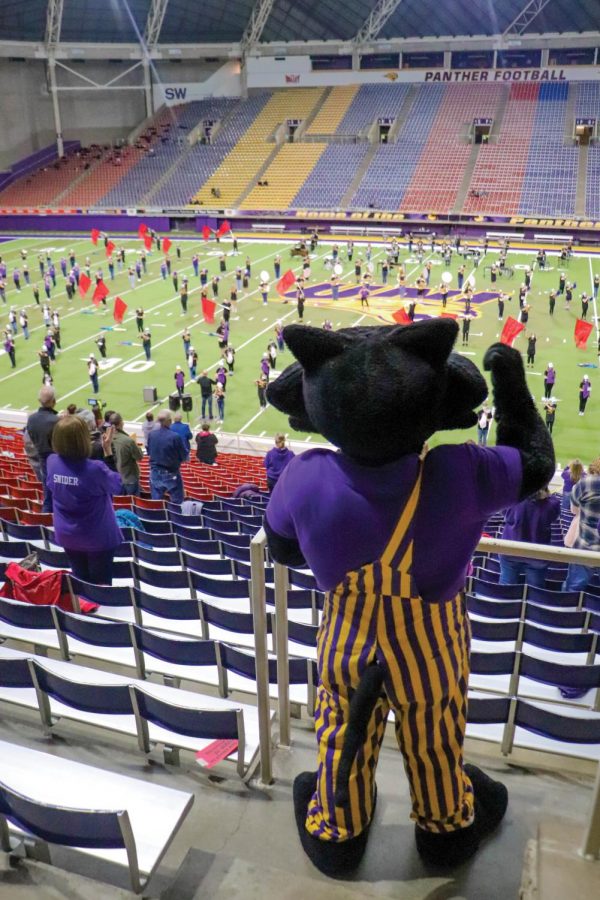 TC enjoys the spirited music of the Panther Marching Band in the UNI-Dome as they play familiar songs from the movies.

The Panther Marching Band (PMB) returned to the UNI-Dome field on Friday, Oct. 23 for the second time this season to present “A Trip to the Movies,” a performance featuring popular songs from movies such as “Jurassic World” and “Star Wars.” The performance was also live-streamed on their Facebook page.

Kathryn Rech, a senior at UNI studying graphic technology and interactive digital studies, plays the mellophone for the PMB. Prior to the performance, she was excited to be back on the field.

Rech said the music for “A Trip to The Movies” could be the most difficult of the season. Despite the challenge, she said the band has done a good job of becoming comfortable with the music and performing it well.

Other challenges Rech believes the band has handled well are social distancing and coming to terms with the fact they would not be marching. At the beginning of the season, the band learned how to properly cover instruments so aerosols would not spread and how to play instruments with masks on.

“We are definitely proud to say that we have not had an outbreak happen in the Panther Marching Band,” Rech said. “Something awesome to kind of show off is that we really care about getting the opportunity to play music with each other, especially at a time like this.”

Rech misses playing on the field during football games and sharing traditions with freshmen like running onto the field. Although the band is not marching, dance moves are incorporated into songs.

“There has been a bigger focus on the music side of things,” Rech said. “We have seen, definitely, a heightened musical level, but we have not necessarily been able to touch the marching aspect of what marching band is supposed to be.”

Sam Smith, a junior studying computer science and interactive digital studies, plays the trumpet for the PMB. Before the performance, Smith looked forward to returning to the UNI-Dome, a place he describes as home to the PMB.

“We have gotten exponentially better as we have been getting closer to this performance,” Smith said.

He echoed Rech’s thoughts on this music being difficult.

“We have really been getting into the nitty-gritty of the dynamics and playing with musical tone and playing with emotion, and things like that, instead of just playing the notes that are on the page,” Smith said. “And I think that’s something kind of special that we bring is that we do play with emotion. We really try to be a music ensemble, whether we are marching or not.”

Performing independently of football games has been an adjustment, but one Smith has welcomed. He explained that parents of band members can come to a performance solely dedicated to the band, and they can even watch the Facebook livestream. This makes it easier for parents to support students without having to drive from far away. They can watch performances without being in public, something Smith noted might make some parents uncomfortable due to the pandemic.

“We have had some great, great turnouts of just parents and the general campus community showing a lot of support,” Smith said. “They are really showing that they do care about the band and that they want the band to be out there.”

Justin Mertz, director of the PMB, said he always looks forward to band performances, but he has been especially this year.

“The simple act of being able to get together and make music and do it as well as the PMB does, I think is very exciting,” Mertz said. “I am always happy for people to see the results of not only the work that the students do on a regular basis, but also this year, I’m excited for people to see what their perseverance has resulted in. Because they have to put up with a lot of safety measures and a lot of adjustments to what we normally do.”

Mertz said the PMB has always worked efficiently, something that is especially important this season. The band takes regular breaks to allow air to circulate and filter. The band loses working time due to this, and Mertz said the band has to be all the more productive to ensure all content is covered. He commends the PMB for acclimating quickly to new procedures and routines.

“They do it happily,” Mertz said. “They are a great bunch of students.”

Merz is glad the band is able to put on these performances, which he said are the best alternatives, given current circumstances due to the pandemic. However, the band misses the energy and spectacle of performing during Panther football games.

Mertz said the PMB is a group of talented musicians who work hard, and he is proud the PMB is able to provide music to the university community.

“The students of the PMB have really risen to the occasion,” Mertz said.

“Trip to the Movies” was going to be a halftime show for a football game. The goal for many PMB performances is to select songs well known to the crowd and that are fun to perform.

When Friday came, people of all ages gathered in the UNI-Dome to hear the carefully curated songs.

The band kicked off with familiar tunes like the UNI fight song, “Westward Yo,” and the “Attack on Titan” theme. Following songs included the 20th Century Fox fanfare, “Duel of Fates” from “Star Wars,” and themes from “Jurassic Park,” “How to Train Your Dragon” and “James Bond.” UNI mascots TC and TK appeared on the field, waving to the crowd and dancing during the “How to Train Your Dragon” theme.

Smith said that band members normally don’t express their nervous energy. Whatever nervousness they feel is turned into excitement before performances. Some sections have pre-performance rituals to hype up members. The drumline rumbles to life before introductory songs, the trumpets run around in circles and the mellophones chug Pixy sticks.

Despite any nerves, Smith said playing for a crowd is a whole different feeling than just practicing.

Rech agrees that the performance was a great one.

“It could not have gone any better,” Rech said after the performance.

She said the band was happy to be back in the UNI-Dome in front of a crowd, and they cannot wait for its next performance.

“Being able to just perform in front of people is always super exciting for everyone,” she said.