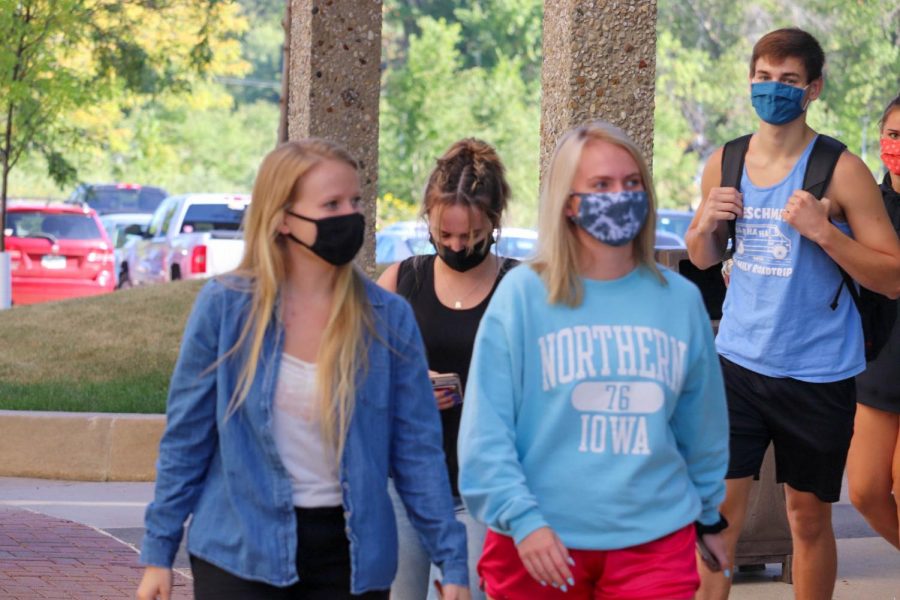 After pushing back against a mask mandate since March, Governor Kim Reynolds implements mandate through Dec. 10.

Most notable among the new regulations included the requirement that anyone two or older must wear masks when inside a public building, and within six feet of others not of their households for 15 minutes or longer.

Indoor social gatherings are now barred at 15 people or less, and outdoor gatherings at 30 or less. Youth and adult group sporting and recreational gathering are prohibited except for high school, college and professional sports.

The mandate, which will last until Dec. 10 at 11:59 p.m., also limits in-patient elective surgeries in Iowa hospitals and requires all restaurants and bars to close at 10 p.m., similar to the earlier mandate that was in place for several counties, including Black Hawk.

This mask mandate is something Governor Reynolds has pushed back on since the beginning of the pandemic in March.

On Monday night, however, the governor stated that she worried Iowans were becoming “complacent” due to the fact that many COVID-19 patients experience mild symptoms. Now, with Iowa’s 14 day positivity rate standing at 22.5% as of Nov. 18, she felt the mandate was necessary.

“In late October, new daily hospitalizations were just approaching the 100 mark,” she said. “Now, just a few weeks later, they top 200 a day. That’s not sustainable.”

UNI students expressed their gratitude for the governor’s actions, although several added that they considered the mandate long overdue.

“It was relieving to know that that was happening, but it kind of felt like it’s a little too late at this point,” said Leah Little, a sophomore majoring in marketing, advertising and digital media and organizational leadership. “She’s doing something, (but) I think there’s definitely more that could be done.”

“It should have been done a while ago,” she said.

Reynolds said the new regulations are designed to help the state avoid the worst-case scenario in which hospitals are so consumed with COVID-19 cases that the other medical needs of Iowans are neglected.

“If we don’t do something, will there be enough first responders to help? Will trauma teams be available? Will you get the care you need?  Not if we don’t act,” she said.

Little said she hoped the measures would stem the rising tide of COVID-19 cases.

“I can only hope that they will be effective. I think we would all do something differently if we could, but I think that all you can do is hope that she’s using her best judgement,” she said.

“In terms of effectiveness, I think this is probably what’s best to keep everything going while trying to prevent the virus at the same time, because it’s kind of a difficult balance to strike,” she said.

Reynolds also mentioned the upcoming holidays and her family’s choice not to celebrate together.

“I don’t want to do this, especially as we’re coming into a holiday season that is normally filled with joy,” she said. “I cherish Thanksgiving with my family, and this year we’re postponing that… it’s to keep them safe. It’s to keep you safe.”

Little and Trucano both expressed skepticism regarding whether the regulations would be followed as the holidays approach.

“I think it’s going to be enforced, but I also know that people are not always smart, so even if it is enforced, there’s probably going to be people who don’t follow the rules,” Trucano said.

Indeed, Reynolds concluded by appealing to Iowans to follow the guidelines “not because you’re told to, but because it’s the right thing to do” and warning them about the consequences of failing to do so.

“Businesses will close once again. More schools will be forced to go online. Our healthcare system will fail, and the cost in human life will be high,” she said.

If the new measures will avoid that scenario, Trucano is more than willing to comply.

She trailed off, making a face.

“I would understand, but it would be bad. I don’t want that.”