Panthers come out on top over Coe College, 70-60 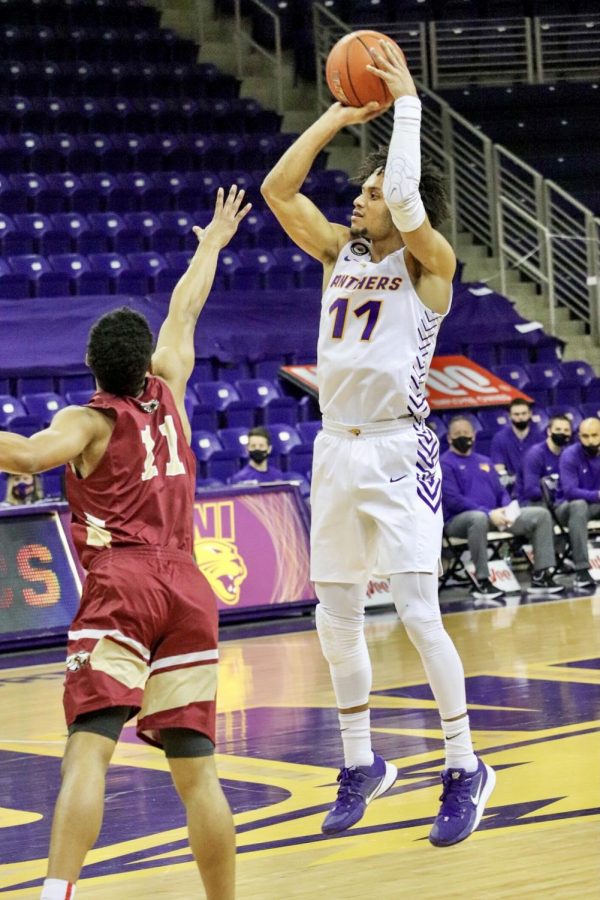 UNI senior Trae Berhow shoots over the Kohawk's Greg Hall. Berhow finished the game with 18 points and four made three pointers in the win.

The Kohawks, a Division III school playing in the American Rivers Conference, made the trip from Cedar Rapids to the McLeod Center to take on the Panthers. A series of cancellations and postponements made this the first game of the year for the Kohawks, as well as their first game in 330 days.

The Panthers never trailed in this game, but the Kohawks did manage to keep it interesting. True freshman guard Bowen Born got the scoring started for the Panthers, giving them a 3-0 lead when he knocked down a deep three-pointer from the right wing. Coe’s Cael Schmitt would respond with a three-pointer of his own to tie the game. This would be immediately followed by a 9-0 run by the Panthers that had them looking poised to run away with the game and turn it into a blowout. However, UNI went cold offensively and the Kohawks got it back to a four point game.

The Panthers really found their stride late in the first half when they went on a 9-2 run in the final three minutes. They would open the first three minutes of the second half with another 9-2 run, combining for a 18-4 run in just a six minute stretch, jumping out to a 49-32 lead. Despite this run, the Kohawks still managed to claw their way back into it. A three-pointer by Greg Hall made it a single-digit game at 64-55 with 5:36 to play. However, the Panthers came away with the 70-60 victory.

Two players really stood out for the Panthers in this game. The first of the two was Nate Heise. The true freshman put up a career high 18 points in a team high 38 minutes. He knocked down six of his 10 shots, three of his seven shot attempts from beyond the arc, and all three of his free throws. When asked about being trusted to play 38 minutes, Heise said “Coach has developed some trust in me over the season so far, and I’m appreciative of that.” The other standout was Trae Berhow, who also finished with 18 points and was critical in the 9-2 run late in the second half that allowed the Panthers to go into the break with a 10 point lead.

Noah Carter put together a solid game for the Panthers. He finished with 13 points on five out of 10 shooting while also pulling down eight rebounds. Bowen Born was the final Panther to enter double figure scoring, finishing with 10 points while shooting four out of 10 from the field and two out of five from beyond the arc.

This win gives the Panthers a record of 4-10 on the year. They will travel to Carbondale to take on Southern Illinois on Jan. 30 and Jan. 31 before returning home to match up against Indiana State on Feb. 6 and Feb. 7.