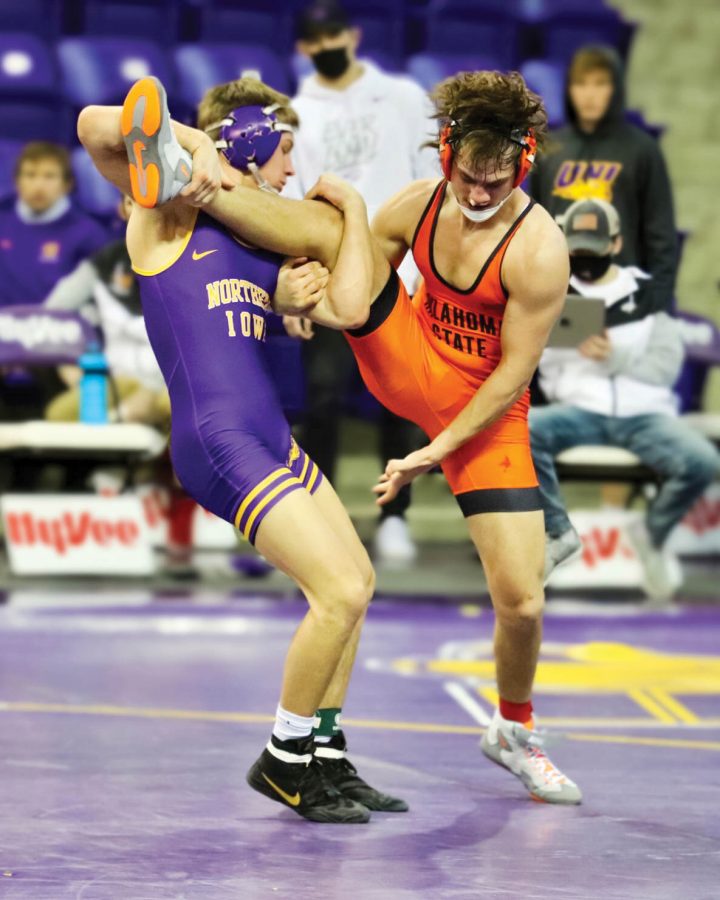 The Panthers started out strong against the Cowboys but ultimately lost bringing their season record to 3-2.

The 16th-ranked Northern Iowa Panthers wrestling team played host to the 5th-ranked Oklahoma State University Cowboys in a Big 12 Conference dual meet at the McLeod Center on Saturday, Jan. 30. In a matchup between two teams that are both ranked in the top 20 nationally, the Panthers put up a strong fight, staying with the Cowboys for much of the meet, but Oklahoma State came out on top in the team score, 20-12.

The Panthers were able to come out on top in four of the ten matches on the day. The meet started off with a match in the 125 lb category with a matchup between two undefeated wrestlers. After a slow start, 18th-ranked Brody Teske of the Panthers picked up a 4-point near fall in the second period against Trevor Mastrogiovanni, ultimately coming out on top with a 6-0 decision victory. At 133 lb, 17th-ranked Kyle Biscoglia kept up the momentum for the Panthers, winning by decision 2-0, giving the Panthers a 6-0 team lead.

After the Panthers got the early momentum, the Cowboys responded by winning the next five matches in a row, two of which were by major decision, with the other three coming by regular decision. In these matches, three of the five Cowboys were ranked in the top 15, with both Boo Lewallen at 149 and Travis Wittlake at 165 ranked 4th in their respective weight classes. This strong stretch gave the Cowboys a 17-6 lead with three matches remaining.

Next up was a matchup at 184 lb between Parker Keckeisen of the Panthers and the undefeated and 9th-ranked Dakota Geer of the Cowboys. In the closest match of the day, Keckeisen led 2-1 after the first period, picking up a takedown while Geer managed an escape. Geer picked up another escape early in the second period, putting the score at 2-2, a score that would hold until the end of the third period. In sudden victory, Keckeisen managed a takedown to come out on top 4-2, handing Geer his first loss of the season.

The Panthers and Cowboys would split their last two matches. At 197 lb, Oklahoma State’s 14th-ranked AJ Ferrari defeated UNI’s Keegan Moore by decision, 10-4, and in the 285 lb heavyweight category, UNI’s 11th-ranked and undefeated Carter Isley defeated Austin Harris by decision, 3-0. The Cowboys would win the dual meet by a final of 20-12.

“I was happy with a lot of the performances, but there’s more there, guys just have to believe it,” UNI head wrestling coach Doug Schwab said after the meet. “Sometimes when it’s safe at the end it’s like now I’ll really show what I can do. It can’t be when it’s safe, it’s gotta be from the start, and we’ll keep working on that. I like how our team competes and I thought it was a fun dual.”

With the loss, the Panthers fall to 3-2 on the season. UNI will hit the road for a dual meet at Northern Illinois on Friday Feb. 5. They will finish the regular season with three home meets on Saturday, Feb. 13, taking on Central Michigan, Northern Colorado, and Iowa State.