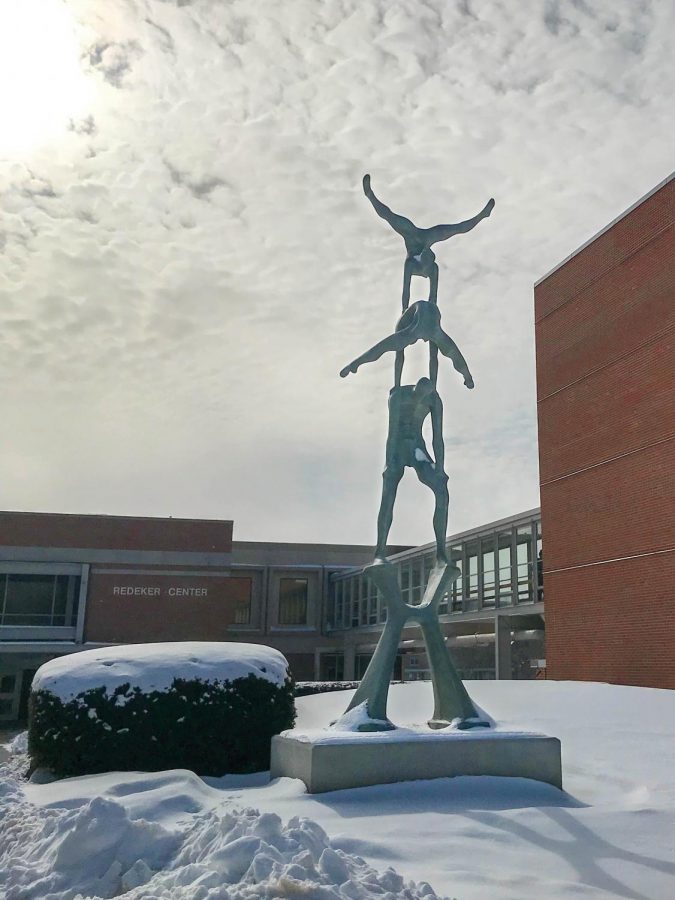 "The Three Acrobats" sculpture proudly stands tall once again outside of the Redeker Center in a slightly different location.

As several students noticed UNI crew workers reinstalling “The Three Acrobats” sculpture in front of the Redecker Center on Wednesday, Jan. 20, some were left wondering when and why it was taken down in the first place.

Abby Hedley, a UNI Art Conservationist, along with Tom Stancliffe, a retired UNI Fine Arts Professor specializing in public art, have been researching and conserving the piece in house since it was first removed during the summer of 2019.

The sculpture, originally named “The Three Acrobats,” and more commonly referred to as just “The Acrobats,” was installed on UNI’s campus in 1965 by artist Edmund Whiting. The sculpture, made with a fiberglass shell, had begun to age and crack, allowing the internal metal structure to rust.

This was the first time this piece was ever removed from its original installation site and conserved. When asked about the conversation process, Hedley stated, “The conservation process was a very thorough and in-depth process, requiring a lot of time and attention. We first removed any broken pieces of the fiberglass shell, also removing any rust or lichens that had accumulated on the surface.”

She continued, “Then, we went over the internal metal skeleton, repaired any broken areas and filled the voids with marine-grade foam to protect the structure from further rust and damage. Finally, we patched the broken areas, paying close attention to the form of the piece, keeping true to the artist’s original intent and vision.”

When asked about the convenience of reinstalling “The Acrobats” on Wednesday, Jan. 20, Abby said, “We installed this piece this past Wednesday because we saw an opportunity to be able to return it to the public, so we decided to jump. I will admit, it was one chilly install.”