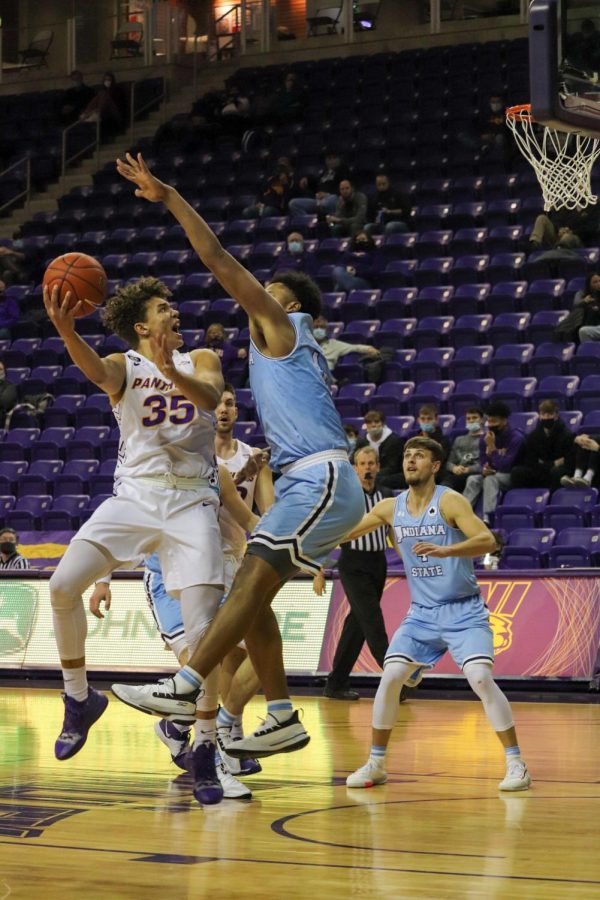 Noah Carter attempts a shot vs Indiana State. He finished Sunday's game with a team-high 25 points in UNI 70-67 victory.

The UNI Men’s Basketball team hosted the Indiana State Sycamores on Saturday night at the McLeod Center for the first of two weekend games between the teams. Indiana State was coming off a six game winning streak heading into the night with an 11-7 record. The Panthers were coming off splitting games with Southern Illinois Salukis last weekend and are 5-12 on the season. The hard-fought MVC game eventually saw Indiana State win the game by the score of 61-57.

The game started slow with both teams struggling to get going on offense. The Panthers led 28-25 at halftime following a Noah Carter three to close out the half. However, the Sycamores took the lead right after the break and the Panthers did not lead the remainder of the game. The Sycamores shot 43% from the field compared to UNI’s 36%. The Panthers slightly out-shot Indiana State from beyond the arc at 29% to  25% from the visitors. UNI dominated from on the boards with 45 rebounds as opposed to Indiana State with 31.

Leading the way for the Sycamores was MVC first-team standout Tyreke Key, who had 31 points and seven rebounds, shooting 12-18 from the floor. The Sycamores were also led by Jake Larivia who had eight points, four rebounds, and four assists.

The second game of the weekend series between the two teams saw the momentum shift in the Panther’s favor, as they came out on top 70-67 in a hard-fought win. Noah Carter led the way for UNI with 25 points and five made three-pointers. Austin Phyfe had 17 points for the Panthers and Trae Berhow had ten of his own.

UNI trailed at halftime 35-31 and trailed for most of the second half, but eventually clawed their way back into the contest. A Trae Berhow three-pointer with just under two minutes remaining in the game gave UNI a two-point lead, which they would not revoke for the rest of the contest.

The win moves UNI to 6-12 on the year and 4-8 in the Missouri Valley Conference. Their next game will be on Wednesday, Feb 10 against Drake University at the McLeod Center.