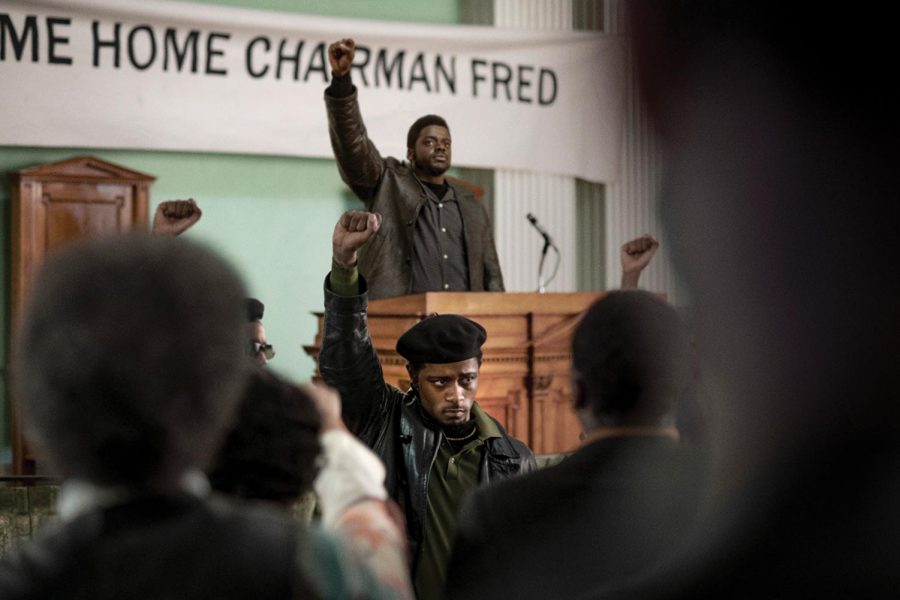 Fred Hampton was only 21 years old when he was murdered by Cook County police in an illegal home raid in 1969. He was drugged with a sedative to prevent him from fighting back and shot twice in the head while sleeping in front of his nine-month pregnant partner, Deborah Johnson.

Even though he died young, Hampton had already accomplished more than many of us could ever dream. As chairman of the Illinois chapter of the Black Panther Party, Hampton founded the multicultural organization, the Rainbow Coalition, and allied his party with other Chicago groups in an effort to end street violence and instigate social change. He was a born leader and speaker, moving hundreds with his words at the protests and educational courses he led.

Now, after fifty years since his untimely death, Hampton is getting the biopic treatment in “Judas and the Black Messiah”.

The British-born Daniel Kaluuya portrays Hampton in a performance that can only be described as electrifying. Kaluuya has already made himself known with his lead performance in Jordan Peele’s “Get Out” and a supporting turn as a sadistic hitman in Steve McQueen’s “Widows.” Here, Kaluuya elevates his game even further as he channels both the powerfulness Hampton carried in public and the tenderness he had in private. There isn’t one second you’re not glued to him while he’s on screen. An Oscar nomination is bound to happen and a win would be deserved.

Playing Judas to Hampton’s Black Messiah is LaKeith Stanfield (also in “Get Out” as the brainwashed Andre King). Stanfield plays William O’Neal, who was a petty Chicago criminal who became an informant for the FBI as he rose the ranks within the Black Panthers. O’Neal was the one that sedated Hampton in exchange for $200,000, an act he never considered a betrayal. Stanfield rises close to the level of Kaluuya as he gives a twitchy and layered performance that is nothing short of a career-best.

Directed and co-written by Shaka King, “Judas and the Black Messiah” meets both criteria of a biopic, which is to be both entertaining and informative beyond the top-layer Wikipedia facts. We learn about Hampton through O’Neal, as we watch him ascend from the bottom to the top within the party, interacting with Hampton at various points in history.

King doesn’t commit the sin of being enamored with his subject. Like the Messiah in the holy book, Hampton had his demons that he had to constantly wrestle with. King takes a similar approach that Steven Spielberg took with “Lincoln,” where we get a compelling real-life hero and learn about what they had to overcome both externally and internally. This treatment also extends to O’Neal, whom King doesn’t wholly vilify or pardon. We’re shown the path O’Neal initially led himself down and how he saw an opportunity to work for the FBI. While it’s an easy decision to make, King lets the audience decide how to perceive O’Neal’s actions.

With Steve McQueen’s go-to cinematographer Sean Bobbitt in his crew, King makes this one of the most surprisingly gorgeous movies of the year. Incorporating a mixture of long takes and over-saturation, King and Bobbitt perfectly illustrate the vibrant urban setting. And the jazz-infused score carries the sharp tension with its low trombones.

At just over two hours long, King carries his film with great energy from beginning to end. Expertly filmed action is interspersed throughout as well as sharply edited speeches that contain more action than the actual shootouts. Even when King falters for a few brief moments at the beginning of the third act, he picks himself back up and delivers an utterly spine-chilling and infuriating ending that properly uses the clichéd element of postscript.

“Judas and the Black Messiah” is an all-powerful work from director Shaka King and the two leads of Daniel Kaluuya and LaKeith Stanfield. Both timely and historical, this biopic will surely land near the top of my best-of-year list and is not one to miss.