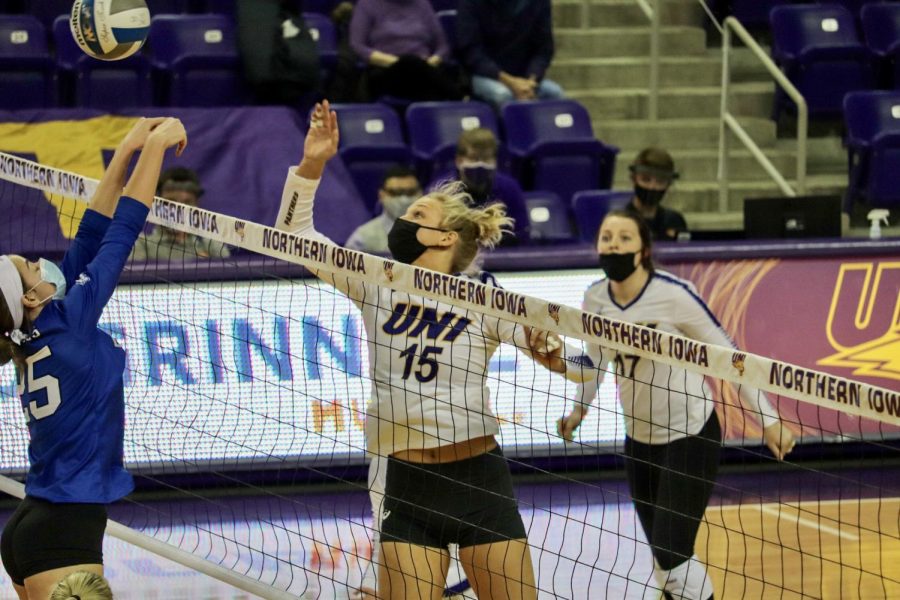 Opposite hitter Carly Spies had 10 kills and two blocks for the Panthers in Monday's matchup against Missouri State.

On Sunday, Feb. 14 and Monday, Feb. 15, the UNI Panthers volleyball team played host to the Missouri State University Bears for a pair of Missouri Valley Conference volleyball matches. The Panthers entered the matches with a record of 2-5 on the year, coming off of two straight wins against Evansville. The Bears entered 8-1. What resulted was the teams trading victories in two thrilling volleyball matches, both of which took all five sets to complete.

In the first match of the series, the Panthers got off to a fast start, finishing the set on a 9-2 run to win it 25-15 and take a 1-0 lead. What followed was more of the same, with the Panthers looking dominant throughout most of the second set. The Bears managed to keep it a little closer, but UNI still got the set win 25-19, moving to a 2-0 lead and needing one more set to clinch the match victory.

Throughout most of the third set the teams traded runs of dominance, with one team taking a few points in a row, followed by the other team doing the same. The Panthers eventually found themselves leading 22-18, needing just three more points to win the match. However, the Bears won the final seven points to win the set 25-22 and stay alive. MSU followed this up with a fairly dominant fourth set, winning 25-19 and setting the stage for a decisive fifth set.

In the final set, this one only played to 15 points, the Bears got off to a early advantage, taking an early 6-1 lead, before UNI got back into it, cutting the Missouri State lead to 7-6. Ultimately, the Panthers fell just short, with the Bears’ Brooklyn Cink scoring the final two points via a kill and a service ace, giving Missouri State a 15-11 set victory and a 3-2 match victory.

Sophomore Emily Holterhaus finished with a team-high 16 kills, while junior Baylee Petersen was the leader in digs, finishing with 15. Freshman Tayler Alden led the Panthers with 46 assists. She was also named MVC freshman of the week for volleyball.

The Panthers were back at it the next day, looking for revenge after letting a 2-0 lead slip away the day before. UNI came out cold in the first set, never leading and ultimately falling 25-18. Things turned around in the second set, with the Panthers using a run of three straight aces by Kaylee Donner to provide a spark that would ultimately turn into a 25-17 set victory for the Panthers.

UNI fell behind early in the third set, trailing 7-3 before turning things around and coming out victorious 25-23. The fourth set was the closest of the day, with the Bears eventually winning 27-25, forcing yet another fifth and final set. The Bears burst out to a 9-5 lead in this decisive set. However, the Panthers scored 10 of the final 12 points to win the set, 15-11, and win the match, 3-2.

The Panthers were led in kills by Kaylissa Arndorfer, finishing with 16. Tayler Alden again managed a high assist total, this time finishing with 57.