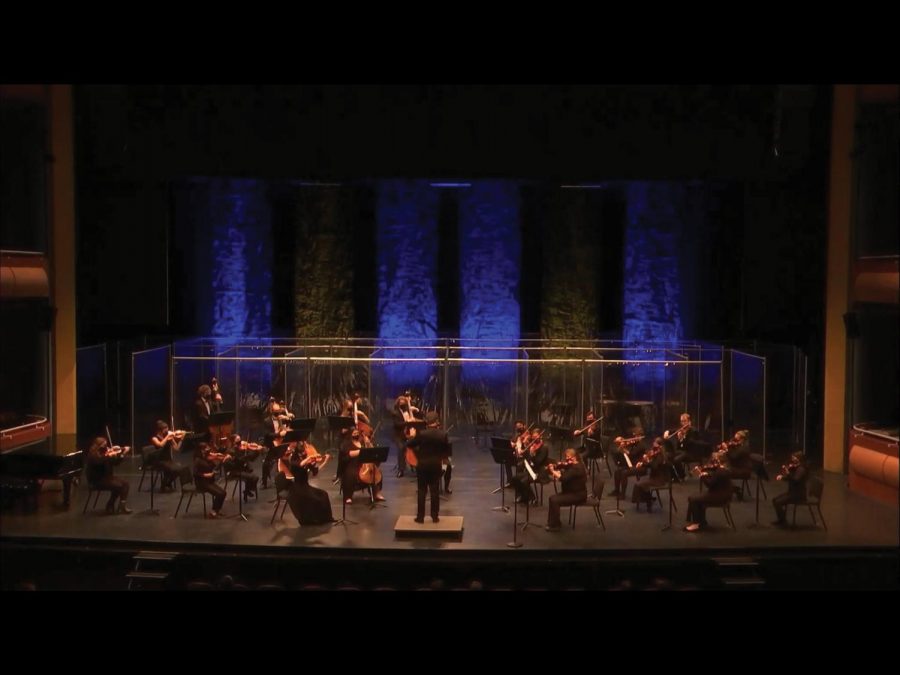 The Northern Iowa Symphony Orchestra, under the direction of Assistant Professor of Music and Director of Orchestral Activities Erik Rohde, presented their winter concert performance on Friday, Feb. 26. The concert had limited in-person seating and was live streamed on the School of Music’s Youtube channel.

The program consisted of four pieces and one symphony: “Ma mère l’Oye” by Maurice Ravel, “Lyric for Strings” by George Walker, “Soliloquy for cello and strings” by Jennifer Higdon featuring cello faculty member Hannah Holman and “Symphony No. 92 in G major, ‘Oxford’” by Joseph Haydn.

When creating the program for the winter concert, Rohde tried to choose pieces that expanded beyond the conventional orchestral repertoire.

“I had a few priorities with this concert,” he said. “Orchestra music is traditionally very stuck in the classical canon. Lots of stereotypical dead white male composers. That’s where the tradition sits. All year I have wanted to program music that helps to even that playing field.”

Rohde chose pieces that are outside the conventional orchestral program like “Lyric for the Strings.” The piece is composed by renowned composer George Walker, the first African American to win a Pulitzer Prize for music.

“Soliloquy for cello and strings” by Jennifer Higdon was the only piece on the program featuring both a female and living composer. Nationally renowned cello player Hannah Holman was featured in the piece. Holman joined the New York City Ballet Orchestra in the 2012-2013 season and is the principal cellist of the Quad City Symphony.

Holman began her career in England as a member of both the English String Orchestra and the City of Birmingham Symphony Orchestra. She was named the new one-year adjunct cello instructor at UNI for the 2020-2021 season.

Although COVID-19 presents the orchestra with logistical challenges, the music program managed to set up the orchestra in such a way that keeps students and faculty safe. String players and percussion players are able to perform fully masked and socially distanced. Wind players play in cubicles of plastic sheeting and have bell covers to trap aerosols.

“It makes it extremely difficult to make music together because it’s really hard to hear through the sheeting and we are so far apart,” Rohde said. “It’s very challenging to make music and stay together with all those barriers in place.”

Although following COVID-19 precautions can be difficult, Rohde is appreciative of his students’ vigilance in adhering to the guidelines

“This is my first year directing the group and I would just say it’s a real honor for me to get to work with these musicians,” he said.

He continued, “For all of our students in the school of music, they are having to overcome so much more than they normally would in order to continue to make art together. This is true in so many areas on campus, but it’s so much more than just a concert right now. It just means so much more under these circumstances to get to do concerts, so we’re pretty lucky.”