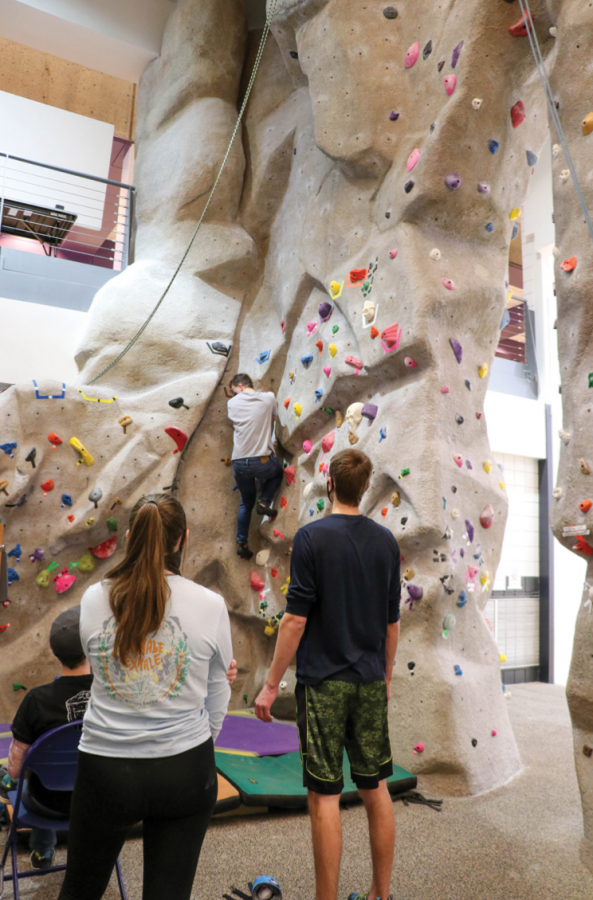 For the third time, Troy Miller faced the obstacle before him. He took a breath, squared his shoulders and then pulled him- self up onto the rock wall.

Gripping only the hand- holds marked with lime green tape, he maneuvered his body upward and around the corner of the wall. Before reaching up for a particularly difficult hold that had defeated him on his previous two attempts, he hooked his left leg over a ledge and pushed with his heel, giving himself just enough leverage to successfully grab the stone. Triumphantly, he swung around the final corner and jumped down to the mat several feet below.

Miller, a sophomore computer science major, was competing in the Boulder Bash, a climb- ing event hosted by UNI Outdoors on Saturday, March 13 at the UNI Wellness and Recreation Center.

“There’s a few differ- ent things to think about every time. It’s usually about where your body is positioned and how you’re balancing yourself,” he said, reviewing his successful climb. “I realized I had to have more positioning on my left side, so I got the heel up on this one to stabilize myself, and then I could go up.”

The Boulder Bash was designed to “bring together the climbing community” and offer climbers a fun challenge, according to Logan Hoile, a second-year graduate student studying recreation, tourism and nonprofit leadership.

“We closed down the wall for a portion of the week (and created new paths), so none of these competitors have ever climbed any of these routes,” said Hoile, who serves as a graduate assistant for UNI Outdoors. “It’s all about just trying your hardest and seeing what you’re capable of on the climbing wall with completely new routes.”

has previously hosted Boulder Bash during fall semesters. However, since programming was limited last fall, the organization wanted to hold the event now prior to their annual Rock Revolution climbing event scheduled for April 17-18 (for more information, visit recreation.uni. edu/trips-clinics).

In accordance with COVID-19 precautions, masks were required for all climbers and volunteers, and participants climbed in shifts with no more than 12 climbers in the wall area at a time. While Miller and the rest of his group climbed, spectators lined the nearby staircase, and the next group of participants awaited their turn

Among them was freshman elementary education major Keely Behan, who works at the rock wall and climbs regularly.

“I just started climbing this year, and I’ve fallen in love with it,”she said. “What better way to spend your weekend than at the rock wall?”

Behan said she typically does top rope climbing, where climbers use har- nesses and ropes to scale the highest portions of the wall. Saturday’s event was focused on boulder- ing, requiring participants to climb without harnesses and tackle lower but still very challenging routes.

“I’m more of a top rope person, but I’m excited to see my skill set in boulder- ing,” Behan said.

the Boulder Bash was designed for climbers of all experience levels.

“We have boulder problems for all levels, so even if you’re a very novice climber who’s only been climbing for a month, you can still participate in this and still climb,” he said.

The Boulder Bash featured more than 30 differ- ent routes, each worth a certain number of points based on its difficulty. The green path Miller had successfully finished was a challenging climb, worth 27 points. Climbers could attempt each path as many times as they wanted during their time slot. At the end, they would combine the point values from the top five paths they completed to get their total score.

As an experienced boulderer, Miller was hop- ing to take home one of the top prizes: a special set of climbing shoes, spray painted gold, silver or bronze to designate first, second or third place in the men’s and women’s divisions.

Whether he won or lost, however, he was enjoying the opportunity to climb.

“I love that it’s physical —it gets me in shape— and at the same time, it’s a lot of problem-solving,” he said. “More than any- thing, it’s the environment around climbing. Everyone is super chill. We’re all friends here. You just get to be a part of a great community who hangs out and gets strong together.”