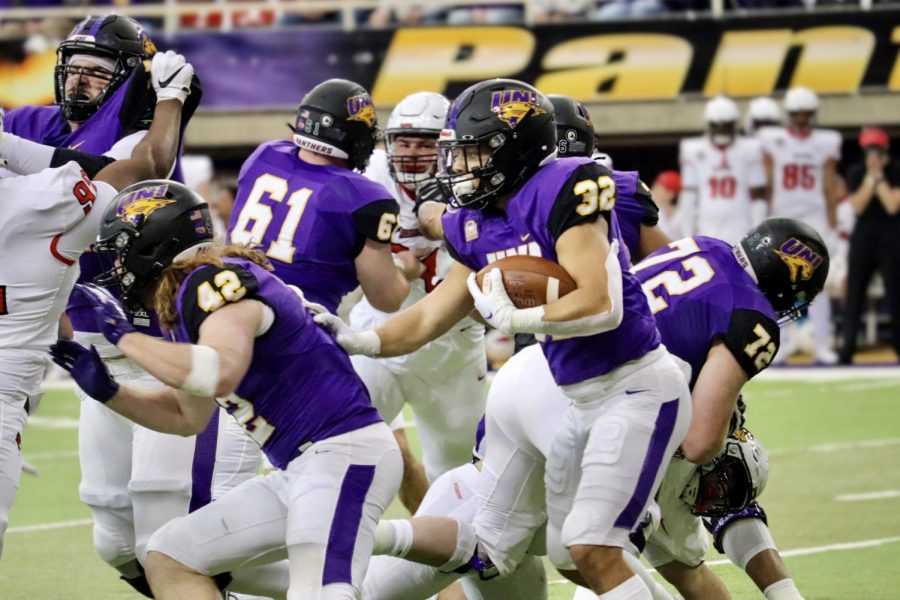 Playing shorthanded without their starting quarterback, the Panthers fell to Missouri State 13-6 last Saturday in the UNI-Dome.

This past Saturday, UNI played host to the Missouri State Bears in a Missouri Valley Football Conference matchup. Missouri State was 3-3 on the season and the Panthers were 2-2 heading into the game. The Panthers had just come off of a one point loss to Southern Illinois last week and were hoping to bounce back against the Bears. 24 hours before the game kicked off, the Panthers were hit with a problem: their starting quarterback Will Mcelvein was out because of COVID-19 protocols, meaning redshirt-freshman Justin Fomby had less than a day to prepare for his first career collegiate start.

The Panthers lost the coin toss and Missouri State deferred, so UNI got the football to begin the game. After little action in the first few possessions, the Bears drove down the field later in the first quarter and scored on a three-yard pass from quarterback Matt Struck to Cars Buddemeye to take a lead of 7-0 with four minutes left to play in the first half. Both teams were strong defensively, when finally Missouri State kicker Jose Pizano nailed a 31-yard field goal to put the Bears up 10-0.The Panthers did answer with a field goal from 27-yards out on an 11 play, 65 yard drive to close out the half, which narrowed the lead for the Bears to 10-3 at the break.

The second half began and it was again much of the same: a low scoring affair with little to no offensive movement. However, the Panthers were able to put together a six play, 25-yard drive that took three minutes capped off by kicker Matthew Cook hitting a 43-yard field goal to bring the score closer to 10-6. The Panthers needed a stop to get the ball back in order to score again and complete the comeback. Unfortunately, Missouri State defense stood pat and held UNI scoreless for the rest of the game. Missouri State did add a field goal from 33 yards out on a clock-draining 12 play, 55-yard drive that took six minutes and only left 4:30 left to play. They took a lead of 13-6, which ended up being the final score of the game.

The defense for the Purple and Gold played well, forcing 12 tackles for loss on the day and only allowed 236 yards of offense, and only 14 first downs. But, the Missouri State’s defense played really well also, and the Panthers were unable to adjust to their new quarterback on such a short notice.

The Panthers have three games left on the season. They will go play Western Illinois next Saturday, and then travel to Vermillion, SD to play South Dakota on April 2. Their final home game of the regular season will be against North Dakota State on April 10th.