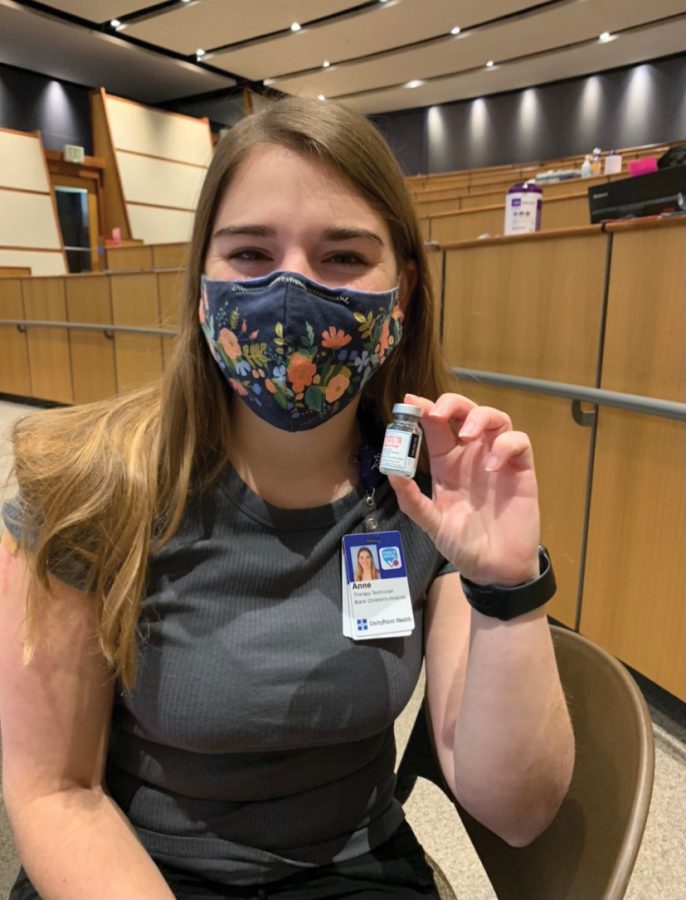 Senior Anne Gradoville holds up her Moderna vaccine after she was vaccinated while working at UnityPoint Hospital in Des Moines.

There is a sense of growing hope around subduing the novel coronavirus and returning to a sense of normalcy as vaccines are distributed to thousands of people throughout the United States and Iowa. Governor Kim Reynolds announced on March 17 in a news conference that all Iowa adults will be eligible for the COVID-19 vaccine by April 5.

In response to this announcement, UNI released a statement on March 23 stating that an email survey will be sent to the campus community to “gauge an interest in obtaining on-campus vaccinations.” The survey will provide the university and the Black Hawk County Health Department information about how many doses will be needed.

The announcement also noted on-campus vaccine clinics will be held in the spring and early summer for students, employees and immediate family members. However, plans for vaccinations are dependent on vaccine supply and extraneous factors.

Although the majority of the campus community has not been vaccinated, some students have already received their vaccines due to underlying medical conditions or their work in a medical setting.

“It was offered to us first because we were working directly with those most at risk,” Studer said. “It was just a no-brainer: if I was offered it, I was going to get it.”

Studer said that although she hates needles, the vaccine felt no different from any other shot she had previously received.

“I was a little nervous because there was a lot of speculations about it, but at the same time I’m not one of those people who was doubting it a whole lot,” she said.

Senior communication sciences and disorders major Sam Anderson also received the Pfizer vaccine on Feb. 15 and March 8, as she works in a clinical practice at the Roy Eblen Speech and Hearing Clinic. Although Anderson was apprehensive at first, she is glad she received the vaccine.

“I think that I was nervous because I had family members and friends doubting the vaccine,” Anderson said. “But I was mostly excited because I believe in the science behind the vaccine, and I was excited to be a part of the start of immunity against COVID-19.”

Her fellow senior communication sciences and disorders major Anne Gradoville received the Moderna vaccine on Dec. 29 and Jan. 28 while working at UnityPoint Hospital in Des Moines.

“I was pretty excited because both of my parents work in health care and they were also getting the vaccine around the same time,” Gradoville said. “My mom is a nurse practitioner, so she had a lot of conversations with doctors, and she felt confident. So, if she feels confident, I feel pretty confident that I can get it too.”

Gradoville experienced some side effects from the vaccine but recovered within a few days.

“After the first dose I just had a really sore arm… for about 36-48 hours afterward,” Gradoville said. “Kind of like if you got a tetanus shot, but more intense. I didn’t feel any other side effects. After the second dose I didn’t feel very well for 24-48 hours. I felt like I had a fever, but every time I checked I didn’t, and then I was super-duper tired, and I had headaches. But after about a day and a half I felt better.”

Anderson did not experience the same side effects as Gradoville but did notice some fatigue.

“After both doses of my vaccine, the only symptom that I experienced was being more tired than usual,” Anderson said. “I know that many people experience worse symptoms, so I was grateful to only feel tired. I felt excited after both of my doses.”

Studer also experienced some mild side effects from the vaccinations.

“There was a lot of soreness and aching in my arm where I got it,” Studer said. “It kind of felt like I had a small cold. Just not feeling great, kind of drowsy, just not 100% me, but that was about it.”

Studer acknowledges the hesitation some people may have towards the vaccine but urges everyone who has the opportunity to receive the vaccine, based on the ample scientific data and evidence proving its safety and efficacy.

“I’m kind of at a point where I respect your decision if you choose not to get vaccinated, but at the same time we’ve been going through the pandemic for almost a year now,” Studer said. “Myself and everybody else is extremely frustrated with still having to social distance and wear masks. To me it seems like a no-brainer. If the vaccine is offered, I don’t know why you wouldn’t go for it.”

Gradoville and Anderson both shared Studer’s view, strongly recommending that students and community members get the vaccine when it is available.

“I think it can be scary because we don’t know a lot about (the vaccine), but the science shows there are very few cases that have had reactions,” Gradoville said.

Anderson said, “This is an important step into protecting those around us and it is the start of returning back to normal life.”