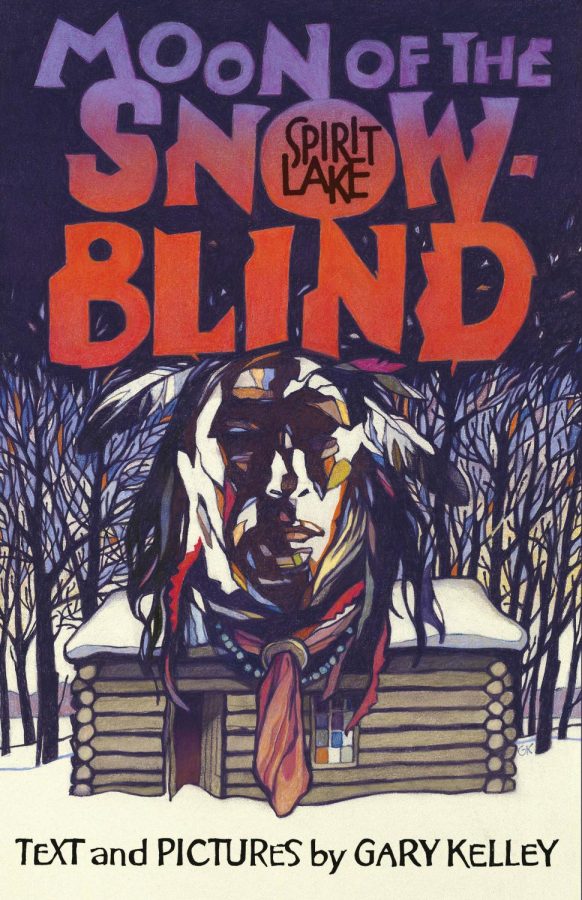 Gary Kelley has also designed a cover for "Brother's Blood: A Heartland Cain and Abel" by Scott Cawelti.

Gary Kelley, a UNI alum and former art professor, is publishing a graphic novel called “Moon of the Snow Blind: Spirit Lake,” which follows the story of Dakota Sioux Natives and four female captives of the Spirit Lake Massacre.

The massacre occurred in March of 1857 in Spirit Lake, Iowa, where Dakota Sioux Natives killed and captured several white settlers. The tale was originally recounted in an autobiography by Abigail Gardner, one of the four women taken captive by Inkpaduta, a Wahpekute Santee Sioux chief.

“Moon of the Snow Blind” starts with the words “two sides to every story.” This is the main premise of the graphic novel, in which Kelley seeks to inform readers about the Dakota Sioux Natives’ perspective and provide background context of what might have incited the Spirit Lake Massacre.

“Up until this point, most of the time I think Iowans that knew that story never heard anything of the Sioux Indian side of it,” Kelley said. “They were always the total villains [of] a one-sided story, but I didn’t look at it that way.”

Kelley is an award-winning illustrator who has worked on various picture books and has created pieces for Time Magazine and Barnes and Noble. “Moon of the Snow Blind” is his first published graphic novel and has 184 pages. In his research, he found that Dakota Sioux Natives refer to the month of March as Moon of the Snow Blind.

Growing up, Kelley was fascinated by Native Americans and their culture, always rooting for them to be victors in various stories. History has seldom been fair to Natives, though, as seen with the events that transpired in Spirit Lake in March of 1857.

Kelley said that it’s a dark, grim story for both the settlers and Natives. He believes that Inkpaduta was angered at settlers’ goals to take away Native land.

“We wanted everything,” Kelley said.

In his research for the graphic novel, Kelley found that Iowa’s white population in 1850 was 192,214. A decade later in 1860, the population increased to 674,913. Inkpaduta, whose cousin was murdered by white settlers, was likely worried (as were other Native Americans) for their futures. Thus, the massacre can be seen as a result of pent-up frustration, anger and grief of what had been done and what was to come as settlers slowly destroyed the indigenous lifestyle.

This story is an important one to Kelley and one he thinks Iowans should know. It’s a layered story with sadness on both sides, historical lessons to learn and a story to inspire empathy toward people of other cultures.

“For the Native Americans, they were here before we were,” Kelley said. “This was their place, and now, we took pretty much all of it over.”

Through this story, he said he wants to say to readers, “Okay, you people. Remember, there are two sides to this story. It’s not just about what happened to Abby’s family. It’s about why it happened and what led to it.”

“Moon of the Snow Blind: Spirit Lake” is available for purchase on Ice Cube Press, Amazon and Barnes and Noble.

Steve Semken, the graphic novel’s publisher at Ice Cube Press, first heard about Kelley’s idea while talking to him at a reading at the Hearst Center for the Arts in Cedar Falls. Semken was familiar with the cover Kelley had created for the book “Brother’s Blood: A Heartland Cain and Abel” by Scott Cawelti, which Ice Cube Press also published.

“The chance to publish a book by a talented Iowa illustrator and author like Gary on a piece of Iowa history was something I couldn’t pass up,” Semken wrote in an email.

This is a historical story Kelley believes should be shared, and he enjoyed interpreting it through artistic imagery.

“That’s the fun of it for me, being given some words to a story to tell and then telling it with pictures,” Kelley said. “That’s why I’m here.”