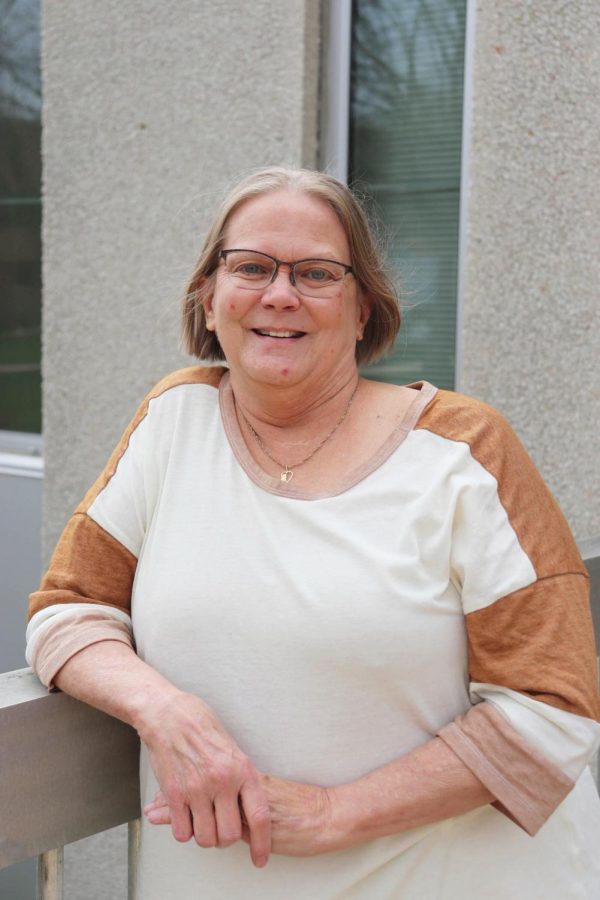 Diane Hensley looks forward to visiting family more often, spending time with her cats and continuing to volunteer in her retirement.

Diane Hensley, a familiar friendly face as a cashier in the Office of Business Operations, will be leaving UNI on April 27 and entering retirement after working for the university for 40 years.

Hensley first moved to the Cedar Falls area in the fall of 1977 and worked in the field of savings and loans through 1980. She eventually applied for several positions on campus at UNI and was first hired as a secretary in the Office of Budget Administration until she was moved to the business office in 1985.

Hensley noted although technology has changed a lot through the years, the spirit of UNI has largely stayed the same.

“There were no computers in our offices back when I started,” Hensley said. “That is the biggest change, but the questions we hear and the interactions with people are much the same. Old buildings (have been) torn down and new buildings built… (but) the campus is still beautiful, especially in the spring…I love the ongoing challenge of learning the changing work scene and exploring the beautiful campus we have.”

Hensley has also made strong relationships with people over the past 40 years working with the university.

“In the budget office, I met Eunice Dell, who became a lifelong friend and sister by choice,” Hensley said. “We ended up living in the same neighborhood and becoming best friends. I am a people person, and meeting the faculty and staff in my first position and staff and students more so in my current position has been the best.”

Christina Geweke, Director of the Office of Business Operations, has worked with Hensley for the past 12 years. She said Hensley will be missed in the business office for her years of experience and kindness.

“Over the years, Diane has memorized a number of phone numbers and mail codes due to frequency of use,” Geweke said. “I could always count on her to know the phone number or mail code I needed without having to look it up in the directory. She also did a great job of recognizing staff milestones like birthdays and anniversaries. Every year on my wedding anniversary, she thinks of me.”

Hensley is also known to lend a helping hand to whoever is in need.

“Diane does a great deal of sewing in her spare time which comes in handy if you need something mended,” Geweke said. “In fact, when my brother came to UNI and had a sewing emergency, she graciously volunteered to help out.”

Hensley loves watching UNI volleyball, spending time with her three cats, sewing and volunteering for P.E.T. P.A.L.S., an organization where people can take their pets to visit nursing homes, hospitals and preschools. Hensley has been involved with the organization since 2000.

She is looking forward to continuing her volunteering after retirement and still plans on going to UNI volleyball games. She is also planning on downsizing her home and visiting Colorado frequently to see her sister and family.

“She has a heart of gold,” Geweke said. “She genuinely cares about people and will do anything in her power to help others in need. Diane has been an integral part of the UNI family for 40 years. Her contributions and loyalty to UNI will always be valued and remembered, particularly her customer service.”