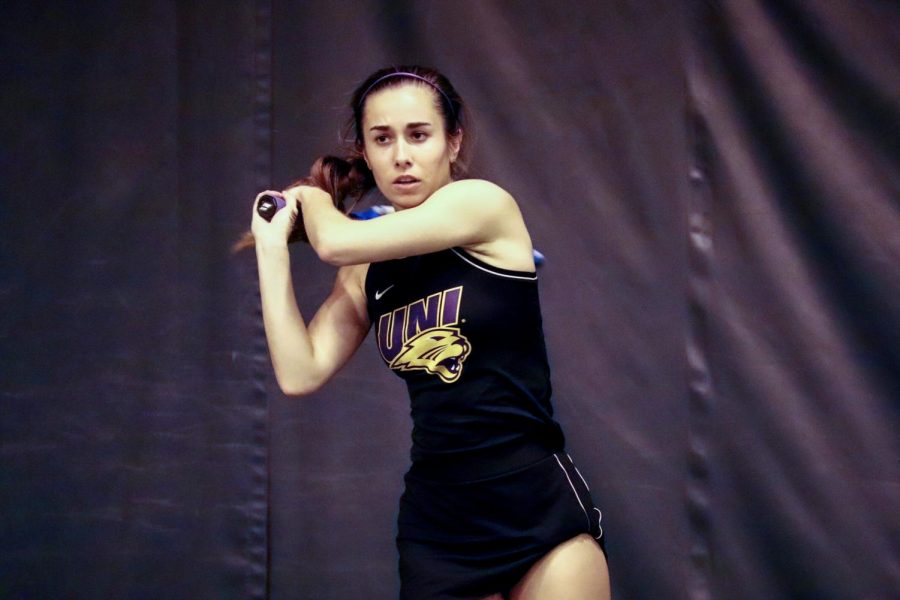 UNI's Valentina Caro was one of four Panther seniors who were honored for their last home meet of their career.

The Northern Iowa women’s tennis team took on Missouri State on Saturday in the final match before the conference tournament. Since this was the final home match of the year, it was also senior night for the Panthers. Seniors for UNI on this Senior Night were Harri Proudfoot, Madeline Doherty, Valentino Caro, and Morganne Borsh.

UNI first lost the doubles by a score of three to zero, getting beat in first through third doubles. Their first doubles round was close, with partners Emma Carr and Oliva Fain losing 7-5 to the Missouri State tandem of Ellie Burger and Claire Martin. Next up for the Panthers was the six singles matches to be played. Unfortunately, the Panthers lost all six singles matches as well, with a combined score of 6-0.

The first singles match for the Panther women was close, with Emma Carr losing by a score of 3-6, 2-6 to Missouri State number one singles player Hana Sisirak.  The fourth singles match was also close for the Panthers, with singles player Oliva Fain losing 3-6, 4-6 to the Bears’ Mary Houston. Despite the unfortunate outcome of the match, the Panthers will have another chance to keep playing in the conference tournament next week.

The Panther women finished the regular season winning only two games on the season, compiling a 2-13 overall record and an 0-5 record in the Missouri Valley Conference. They will be hoping to make something happen in the MVC tournament, where they will be competing this Friday, April 23 through the 25 in Springfield, Mo.