Panthers take 3 of 4 vs Cyclones, Ramblers 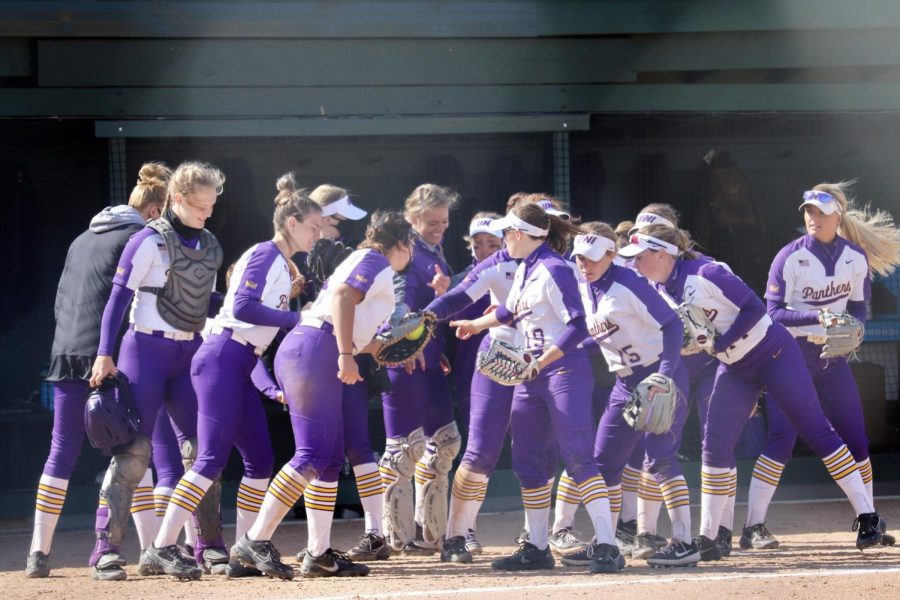 The Panther softball team had a successful week of games, first defeating Iowa State on Wednesday, then taking two of three from Loyola-Chicago.

This past week, the UNI Panthers softball team played four games, taking on the Iowa State Cyclones on Wednesday, April 14 as well as a three-game series against the Loyola-Chicago Ramblers on Friday and Saturday, April 16 and 17. It was a very successful week for the Panthers, taking down the Cyclones in dominant fashion and taking two out of three games against the Ramblers.

In their opening game of the week, UNI hosted the Iowa State Cyclones. The Panthers entered the game with a record of 18-13, while the Cyclones entered 23-15. After allowing no runs in the top of the first, UNI got off to a fast start offensively, with Sammey Bunch hitting a leadoff home run to open the bottom of the first. The home run was her 18th of the year, breaking the UNI record for most home runs in a season. Bunch also held the previous record with 17.

The Panthers were consistent offensively throughout the evening, leading 5-2 entering the bottom of the sixth. UNI put up five more runs in the inning, capping off the game with a bases-loaded triple from Bunch to score three runs and end the game via run-rule. The Panthers came away with a dominant victory against the Cyclones, 10-2, to improve to 19-13.

The Panthers then traveled to Chicago for a three-game series against the Loyola-Chicago Ramblers. Loyola entered the series with a record of 7-20. In game one, UNI managed to score another first inning run when Adara Opiola hit a single to drive in a run. A sacrifice fly in the second inning and a two-run fourth inning gave UNI a 4-0 advantage through four innings. Loyola managed to get on the scoreboard in the sixth, bringing two runs across the plate, but the Panthers still came away with a 4-2 victory.

Game two of the Friday double header was back-and-forth all the way throughout. UNI held a 2-1 lead after the first inning, but Loyola pulled ahead with a four-run second inning. UNI bounced back with a three-run top of the third, before Loyola scored another three runs in the fourth inning. Trailing 9-5 heading into the sixth inning, UNI managed a comeback to tie the game. Runs were scored via a two-RBI double from Madison Parks, a RBI triple from Bunch, and a sacrifice fly from Opiola. However, it wasn’t quite enough as Allyson Ivey hit a solo home run to lead off the sixth inning, and the Ramblers ultimately came away with a 10-9 victory.

In the final game of the series, the Ramblers struck first when Ivey hit a RBI double to give Loyola a 1-0 lead. The Panthers managed to tie things up in the top of the fourth courtesy of a RBI double from Sammy Moss. Through the full seven innings the score remained 1-1, forcing extra innings. UNI finally managed to break the tie in the top of the ninth when Opiola hit a two-RBI single. The Panther defense forced a three-and-out in the bottom of the ninth, and UNI came away with a 3-1 win.

After the three victories, the Panthers improve to 21-14 on the season. They will be back in action this coming Tuesday, April 20 when they travel to Des Moines for a doubleheader against the Drake Bulldogs. They will then return home for a three-game weekend series against the Bradley Braves on Saturday, April 24 and Sunday, April 25.