Panthers get vaccinated on campus 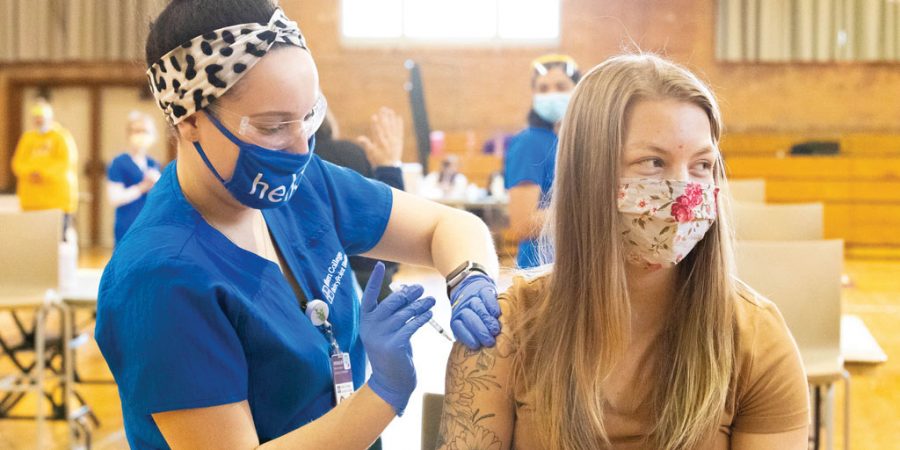 UNI students and staff had the opportunity to get this first dose of the Pfizer/BioNTech vaccine on campus this past week.

Vaccination clinics opened at the University of Northern Iowa from April 14-16 for students and staff.

Panthers received their first dose of the Pfizer/BioNTech vaccine, a two-shot vaccination. All students and staff who participated are expected to return during finals week to receive their second and final dose of the vaccination.

The clinics were originally scheduled for April 13-16, with the April 13 clinic to have administered the one-dose vaccine developed by Johnson & Johnson. However, FDA recommended a “pause” on the use of the Johnson & Johnson vaccine on Tuesday, leading to the cancellation of that clinic.

Students like senior elementary major Ashlynn Averhoff chose to receive their vaccination through the university because it was more “convenient and easy.”

“It hopefully means a little bit more normalcy, and I can hang out with family members and friends without feeling so nervous,” she said.

Freshman movement and exercise science major Hayden Amos also made the decision based on family.

Amos is a member of the UNI football team. He said his sport also influenced his decision, since he can now be more confident that “next fall I’m not going to be a risk to bring down other teammates because of COVID.”

The UNI Student Health Clinic partnered with Allen College for seven shot stations, as well as multiple paperwork stations for those who forgot theirs.

Following their shot, participants were asked to wait on the bleachers until their 15-minute waiting period had concluded, ensuring their safety.

Several students, including Amos, felt relieved after getting their dose.

“It’s kind of like a weight is lifted off my shoulders. There feels like there’s light at the end of the tunnel,” he said.

As of press time, the availability of more vaccine clinics on campus remains unclear. However, local pharmacies such as Walgreens, CVS and Hy-Vee have been offering shots to the public by appointment.