Panthers finish with 1 – 1 split against Drake 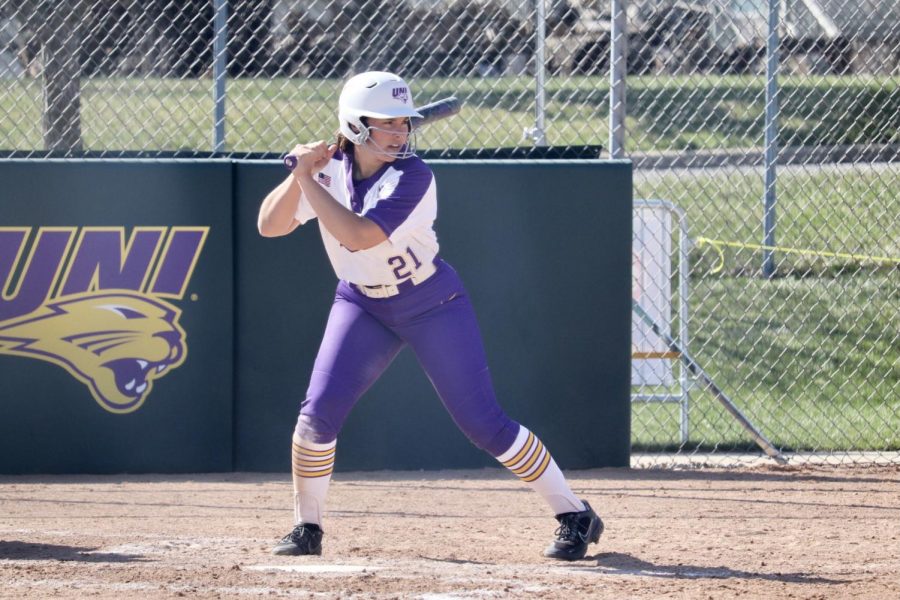 The Panthers split their two games with in-state rival Drake on Tuesday, winning 2-1 in the first game and losing 9-1 in the second game.

The UNI softball team has been red-hot of late, coming into their doubleheader matchup against Drake winning nine of their last 10 games. The Panthers came into the game with a record of 21-14 overall and 11-4 in the Missouri Valley Conference. The two teams played a doubleheader on Tuesday afternoon in Des Moines, with UNI edging out Drake with a 2-1 win in game one, followed by a 9-1 Bulldog victory in the second game.

Game one pitted UNI’s Kailyn Packard against Drake’s Nicole Timmons on the mound which proved to be a pitcher’s duel. Packard came into the game with a 14-5 record and pitched another great outing in the first game. After giving up an RBI single to Drake’s Emily Valtman in the first inning, she settled in and did not allow another run for the remainder of the game, pitching all seven innings.

With Drake leading 1-0 throughout most of the game and with their starting pitcher Timmons cruising, the Panthers broke through in the sixth when Adara Opiola knocked in two runs off an RBI single, giving the visiting Panthers a 2-1 edge. Packard sent down the Bulldogs in the seventh to seal the 2-1 UNI win.

Packard allowed only one run on seven Drake hits, while her counterpart Timmons gave up two runs on eight UNI hits. Immediately following the conclusion of the first game, the two teams turned right around and began play for the second half of their doubleheader.

Game two was not as kind to the Panthers, as Drake took the contest with a 9-1 win. The scoring got started right away for the Bulldogs and they got three early runs off of UNI starter Erica Oler. Drake shortstop Libby Ryan opened up the bottom of the first with a solo home run, and the host team followed it up with a Skyler Rigby two-run single to put them up 3-0 early. The Panthers scratched a run across in the third when Madison Parks scored on a wild pitch, but that would be all they could muster in the game. The Bulldogs continued to rock UNI’s starter Oler, with a six-run fourth inning proving to be too much as they closed out the game with a 9-1 victory in game number two.

The Panthers could only muster one run and two hits for the game. Drake completely turned around their offensive output from the first game, which was critical to their victory.

The Panthers will return home on Saturday, April 24 and Sunday, April 25 for three games against the Bradley Braves. Saturday will be a doubleheader with games starting at 12 p.m. and 2:30 p.m., with Sunday’s contest scheduled to begin at 11 a.m. UNI will host Drake for a single game on Tuesday, April 27. All games will be played at the Robinson-Dresser Sports Complex in Cedar Falls.