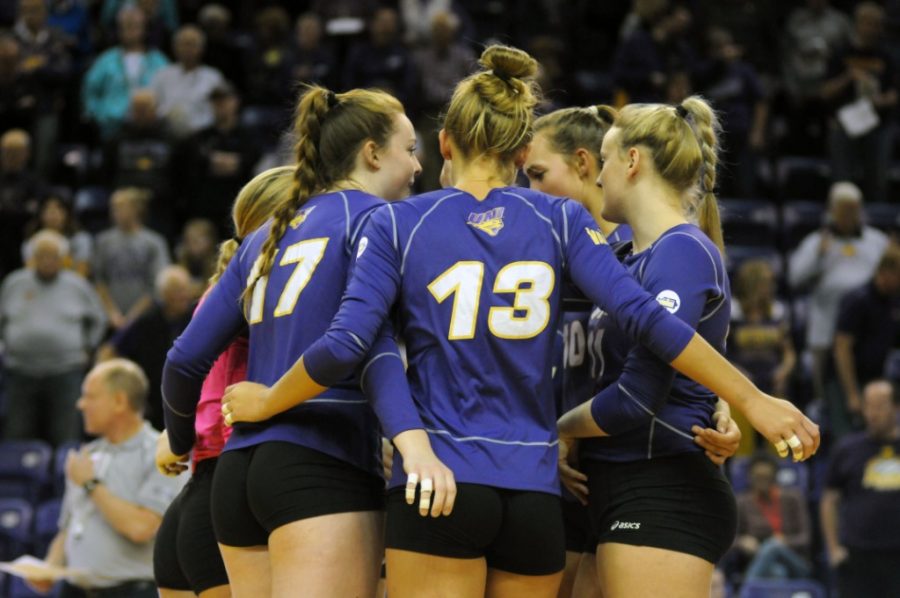 UNI opened the 2021 volleyball season in Green Bay, Wis. for the UW-Green Bay tournament. The Panthers won two of the three games they played in over the weekend.

After a rocky spring, the UNI volleyball team opened up the fall season this weekend at the University of Wisconsin-Green Bay Tournament, playing the likes of North Dakota State, Ball State, and Green Bay. The Panthers were able to come away from the tournament with a winning record as they secured victory in two of their three matches.

The Panthers handled the Bison of North Dakota State and won their first game of the season by a score of 3-1. UNI started strong, winning the first set 25-18 with three quick points by freshman Taylor Alden. Errors cost the Panthers the second set as they racked up six to the Bison’s two, losing 25-16. However, the Purple & Gold were able to bounce back and dominated the third set 25-16 by converting 9 kills. The fourth set was highly contested with multiple lead changes. Ultimately, the Panthers were able to take a late lead with an ace by Payton Ahrenstorff, and then seal the deal with a block by Carly Spies and Emily Holterhaus.

As a team, UNI was able to convert 50 kills on a .218 hitting percentage. Holterhaus led the team with 16 kills, followed by Kira Fallert and Carly Spies with 10 each. Setters Taylor Alden and Jenna Brandt combined for 41 assists and 13 digs.

The Panthers were only able to convert 44 total kills on a .157 hitting percentage. Kira Fallert improved her kill total over the first game with 15 on a .429 percentage.

The final game on Saturday, and of the tournament, ended with a hard fought victory over the Green Bay Phoenix. Similar to their victory on Friday, the Panthers took the first set 25-22, dropped the second set 22-25, and then rallied in both the third and fourth sets, 25-23 and 27-25, respectively. The final two sets were filled with lead changes as neither team took more than a three point lead.

Jenna Brandt was able to keep her assist total up as she notched 25 of UNI’s 43 assists. Inga Rotto and Kira Fallert each had 11 kills and finished with a match-high .556 hitting percentage.

With these results, the Panthers start the season with a winning record of 2-1. They will be back in action Sept. 3 as they head to Lexington, Kentucky for the Kentucky Tournament, where they will play the University of Southern California, University of Kentucky, and Creighton.