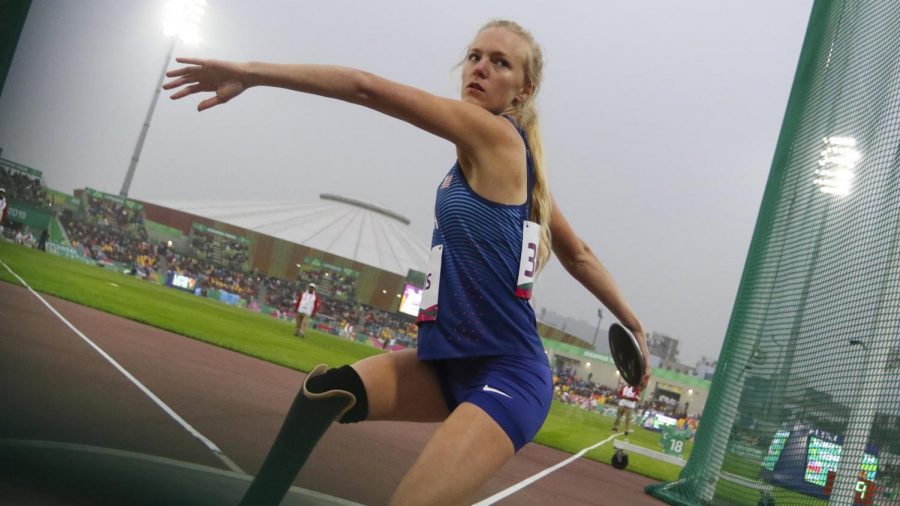 Jessica Heims stood out as both a sprinter and discuss thrower while at UNI. She participated in the discuss throw in the 2020 Paralympics.

After being pushed back a year by the COVID-19 pandemic, the Tokyo Olympics and Paralympics are finally here. The Olympic Games, still being referred to as the 2020 Olympics despite the delay to 2021, concluded on Aug. 8 and saw the United States come out on top, winning 113 medals including 39 golds, both of which were more than any other nation.

With the Olympics wrapped up until 2024, it’s now time for the 2020 Paralympic Games. Also taking place in Tokyo, the Paralympics began Tuesday, Aug. 24, and are scheduled to run through Sunday, Sept. 5. Included in the field of talented athletes is a current Panther, as well as a UNI graduate.

The first Panther competing is Jessica Heims. Heims, who is a graduate of Prairie High School in Cedar Rapids, was diagnosed with amniotic band syndrome at birth, forcing the amputation of her right foot and lower right leg when she was just a year old. Heims competed for the UNI track team from 2017 until 2021, graduating at the end of last school year. During her time with UNI, she competed in both sprinting events as well as the discus throw. She also entered the 2020 Tokyo Paralympics with some experience, as she competed in both the 400-meter dash and discus throw at the 2016 Paralympics in Rio de Janeiro, Brazil, finishing seventh and eighth respectively in the two events.

Heims, only competing in the discus in Tokyo, had a successful showing. She improved on her 2016 performance, taking home fifth place in the competition. Her throw of 34.89 meters set a new American record in the F64 classification. Paralympic competitors are separated by different classifications, and these classifications are dependent on how significant their impairment is. The higher the number, the more significant the impairment. Unlike in 2016, the F44 and F64 discus throwers competed together, and Heims was

the top finisher among those in the F64 classification.

The other Panther competing in Tokyo is Erin Kerkhoff. Kerkhoff, who was a prep standout at Solon High School, was an 11-time state medalist before moving on to compete for the Panther track and field team. Kerkhoff’s impairment comes from her vision. She is considered legally blind as she has 20/400 vision in her left eye and 20/300 vision in her right eye. However, this has not slowed her down on the track. In her opening event, Kerkhoff competed in the heats of the T13 classification 100-meter dash. She finished fifth in her heat and 15th overall with a time of 12.99 seconds. She will also compete in her preferred event, the 400-meter dash, with the heats of this event scheduled to start at 7:21 a.m. local time on Thursday.

These two Panthers have overcome some pretty incredible obstacles to find success in their events. As any athlete knows, it is hard to be successful regardless of circumstances, much less with an impairment to overcome. These two ladies have certainly made their Panther family proud.