Panthers fall to Cyclones in Ames, 16-10 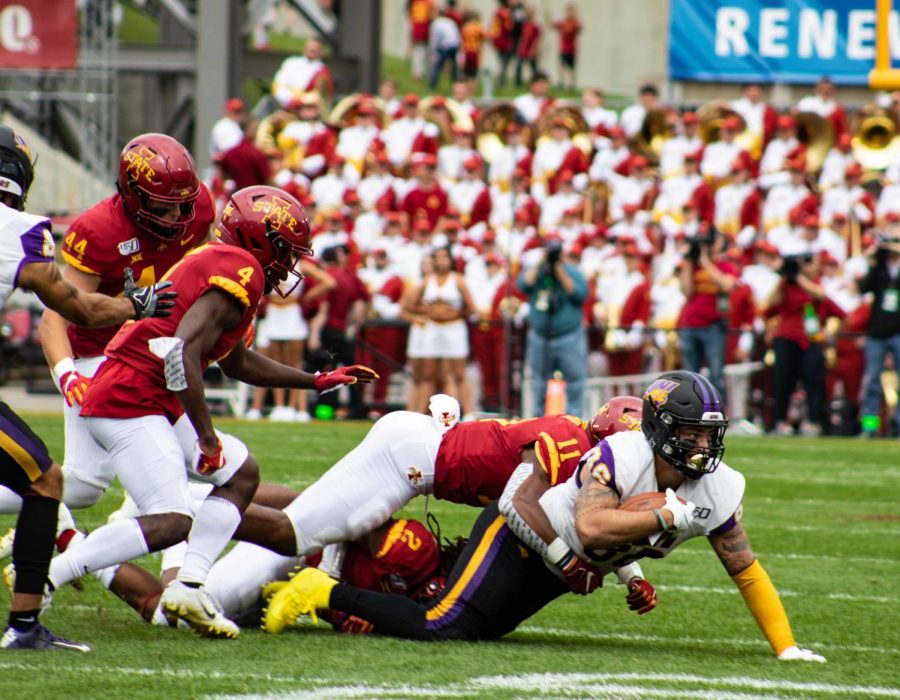 Northern Iowa's Quan Hampton clears the endzonea\ after a 52-yard catch-and-run in the first quarter against Iowa State, putting the Panthers up 7-0 early on in the contest at Jack Trice Stadium.

In the first fall season opener in nearly two years, the UNI Panthers were greeted by a sold-out Jack Trice Stadium and the No. 7-ranked Iowa State Cyclones on Sept. 4. The last time the Panthers began their season in the fall was against these same Cyclones back on August 31 of 2019, in a game which saw UNI push their opponents into three overtimes before eventually falling by the score of 29-26. The Panthers were able to push their in-state rivals to the brink, but Iowa State ultimately prevailed with a 16-10 victory.

“It doesn’t matter rankings, or percentages, or how many all-Americans our opponents have. We came here to win the football game, we were in a position to do so, and I’m disappointed we lost. But we played a heck of a football game,” said UNI head coach Mark Farely at the post-game press conference.

Neither team was able to get moving on their first possessions of the game. The Panthers received the ball to start  and were immediately shut down by the Cyclone defense, going three-and-out after quarterback Will McElvain was sacked on third down. However, the Cyclone offense went three-and-out as well, as the Panther defense held.

The Panthers third possession looked to be stalled, but following a broken play in which McElvain was nearly sacked, he was able to get a pass away while being tackled. His pass was deflected by an Iowa State defender, right into the hands of Northern Iowa’s Deion McShane, who took the ball for a 37-yard gain to keep the drive alive. With the ball at midfield, McElvain was able to complete a slant pass to wideout Quan Hampton, who shed a tackle and took it 52 yards to the house to put the Panthers up 7-0 in the first quarter. An Iowa State field goal on their next drive cut the score to 7-3, which remained the score after the first quarter of play.

Iowa State received the ball at the start of the second quarter and marched down the field, concluding a 14 play, 59-yard drive with a two-yard touchdown run by preseason All-American running back Breece Hall. The Purple and Gold knotted things back up with a Matthew Cook field goal with 2:40 minutes left in the half.

The Cyclones, having deferred their choice to the second half, got the ball to start the second half leading by a score of 13-10. The third quarter was largely uneventful with both teams struggling to get their offenses going. Iowa State added another field goal to increase their lead to 16-10 as the only score in the fourth quarter. The Panthers had a shot with less than a minute remaining, but were unable to move the ball into the endzone, leaving the game to end at a 16-10 final.

Coach Farely had high praises for the Panther defense’s ability to stand strong against a top-10 team in Iowa State.

“Our defense had a gut check today. That was a gut check, especially in those last two drives, against a really good team. We faced a lot of adversity, but we stepped up. Even in that last series, to get the ball back shows our won’t-quit attitude,” said Farely.

McElvain had an up and down opening game of the season. He completed 21 of his 34 pass attempts for 230 yards with one touchdown and two interceptions. Hampton was the leading receiver for UNI, catching eight passes for 99 yards and a touchdown. Alfonzo Lambert and Austin Evans led the Panther defense, each finishing with nine tackles.

“Coming into the game, we knew that (Breece) Hall was a guy who was gonna stick his foot into the ground and move laterally as quickly as anybody,” said UNI linebacker Spencer Cuvelier. “But I feel like our defensive line is always so consistent. They’re always sticking their nose in double teams and eating up blocks, which helps us do what we need to do to make tackles,” added Cuvelier.

Despite the Panthers falling short in their upset bid, they showed that they clearly have what it takes to be a contender in the Missouri Valley Football Conference this season. After taking the seventh-ranked team in the nation down to the wire, it’ll be very exciting to see what they can do throughout their conference schedule.

UNI will travel to Sacramento, Ca. next week to take on Sacramento State University. Iowa State will host the Cy-Hawk game against Iowa, with ESPN’s College Gameday returning to Ames for the second time in three years for the Cy-Hawk matchup.