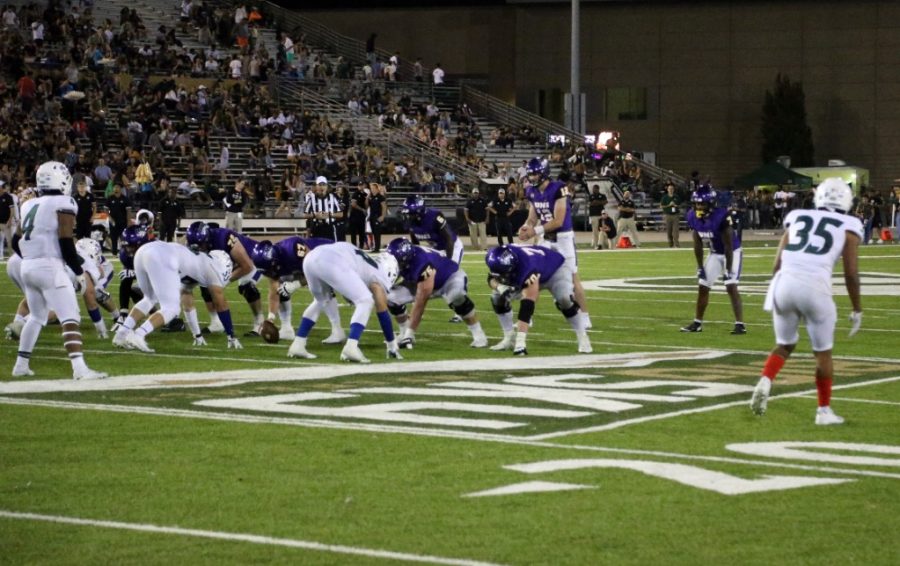 The Panther football team picked up their firs win of the season in Sacramento, Calif. with a 34-16 victory over the Hornets of Sacramento State. Their next game will be a home opener against St. Thomas on Sept. 18.

Despite losing 16-10 to in-state rivals Iowa State last week, the UNI Panthers accomplished enough to walk away with their heads held high. The defense was able to hold the No. 7-ranked team in the country to 16 total points and shut down all-American running back Breece Hall to only 69 yards on 23 carries. Fortunately for the Panthers, this Saturday saw both the offense and defense reach their potential as they got a confident road win over the Sacramento State Hornets 34-16.

Sac State won the opening coin toss and elected to defer to the second half, giving UNI the first possession of the game. The Panther offense wasn’t able to open strong as they quickly punted it out. The defense was able to come away with the first big play of the day as Hornet quarterback Asher O’Hara fumbled the ball in his half of the field. Linebacker Spencer Cuvelier recovered the ball and gave the UNI offense excellent field position. With several rushing attempts, the Purple & Gold were able to put points on the board with a 13-yard touchdown run by Vance McShane. The defense wasn’t done yet in this quarter as defensive back Benny Sapp III intercepted O’Hara in the final minutes.

The second quarter was not as lucrative for the Panthers as they opened with a fumble by quarterback Will McElvain on a scramble. Sacramento State took possession near their red zone and marched down the field to get their second field goal of the game and get within one at 7-6. UNI tried to answer back but kicker Matthew Cook missed a 38-yard field goal.

In the final drive of the half, the Hornets were able to get another field goal, taking the lead over the Panthers heading into the break 9-7. UNI totaled 144 yards on the ground in the first half, but only seven yards through the air.

The lack of aerial presence persuaded head coach Mark Farley to make a quarterback switch for the second half as redshirt sophomore Theo Day made his first official appearance for the Panthers. Day marked a resurgence for the Panther offense as he was able to instantly connect with receiver Isiah Weston for a 48-yard gain. Tyler Hoosman capitalized on that moment with a one-yard touchdown run to take the lead back for UNI. Spencer Cuvelier then recorded another fumble recovery, which was scored by Vance McShane for his second touchdown run in the game. Korby Sander was able to get an interception just after that, and Day capped off a 27-0 quarter for the Panthers with a short touchdown pass to Quan Hampton.

The Panther defense got their third fumble recovery in the fourth quarter as Jared Brinkman strip-sacked O’Hara. Unfortunately, Cook missed another field goal, this time from 48 yards out. The Hornets were able to finish the game with their only touchdown on the day, sealing a 34-16 victory for the Panthers.

Day was the highlight of the game with a 206.2 quarterback rating and two touchdown passes. But the Panther rushing attack should not be overlooked as they totaled 219 total yards, with three players attempting at least 10 times. Cuvelier led the defense with 15 total sacks and two fumble recoveries.

It was a day of the Panther’s offense and defense working together to secure a much-needed road victory. They’ll have a tough test next week as they face the Tommies of St. Thomas in their first home game of the season. Kickoff will be at 4 p.m. on Saturday, Sept. 18.