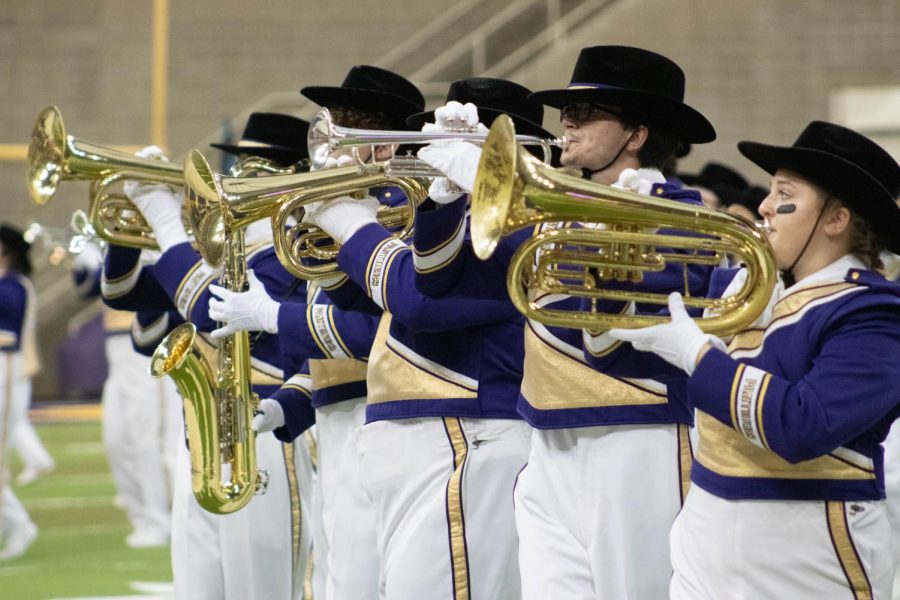 After two years of not being able to march due to COVID-19, the Panther Marching Band held their debut performance at ISU Sept. 4.

When COVID-19 hit in 2019 social distancing kept many away from friends and loved ones. People during this time also started distancing themselves from the performing arts, and many ensembles were prevented from performing in front of an audience.

On Saturday, Sept. 4, the Panther Marching Band (PMB) finally returned to the field at ISU. They performed their pregame show, which included songs such as “UNI Fight,” “Get It On” and “Westward Yo.” After ISU’s marching band performed their show, both bands combined to play “Levitating” by Dua Lipa.

Although the PMB held some standstill concerts last fall, the band was ecstatic to re-introduce the audience to a normal PMB performance. Director of the PMB, Dr. Justin Mertz, praised the PMB for their ability to adapt to ISU’s unfamiliar field without any preparation beforehand. Mertz also added, “I was very impressed with the sort of high level of the performance from a musical standpoint, you know, they gave an energetic and exciting performance that way. And it was very successful, and it was a really good debut after a long layoff from a football field.”

While some of the members had wished that the band’s first normal performance had been in the UNI-Dome, the exhilaration of the day was an unforgettable one and allowed many opportunities for bonding within the ensemble. The PMB prides itself on feeling like a family, but in the past, COVID-19  had hindered the ability for relationships within the band to form.

Kara Gootee, a senior in the PMB and one of the clarinet section leaders explained, “With COVID, it was challenging sometimes to get to know people. I honestly feel like I’m meeting some of the returners for the first time this year.”

Another component of this year that has been difficult to adjust to has been, “That last year’s freshmen and this year’s freshmen were in the same boat together,” Rylee McNeal, a drum major and sophomore at UNI said. “This made for nearly half of the band not knowing what a traditional football game was like because of the fact that we were not able to be a traditional marching band last year.”

Meanwhile, Dr. Mertz sees this season as more of a relief than an adjustment and is excited to see more and more members gradually “step into what it means to really be in the PMB.”

With the first away game experience of the season coming to a close, the members are more pumped up than ever for their first home game on Saturday, Sept. 18. Lizzy Richardson, a junior clarinet in the PMB, admitted, “I don’t mind that ISU was our first game experience of the season. It was nice to be able to experience something new as a vet, and the newer members didn’t know the difference anyway. Although, I can say that it will be refreshing to be back in the dome for the first real performance in two years!”

Dr. Mertz acknowledged that even though performing at ISU’s Jack Trice Stadium was a positive experience. “The Dome is always very special,” Mertz said. “We have a great environment in the Dome, and the fan base is very kind to the PMB. And the band and the fans are very well connected, and that’s a special thing that doesn’t happen at every stadium.”

This marching season has brought a lot of changes and adjustments; however the audience should expect nothing less from the PMB than normal. When asked what’s in store for the audience this season, Dr. Mertz answered, “The PMB upholding its tradition of well-executed, fun and exciting performance that the audience will enjoy hearing. The music and seeing the visuals and, you know, bringing a lot of energy into the Dome. What’s in-store is what they expect. The same thing we always do, and what we have a reputation for that I’m confident we will and are upholding.”