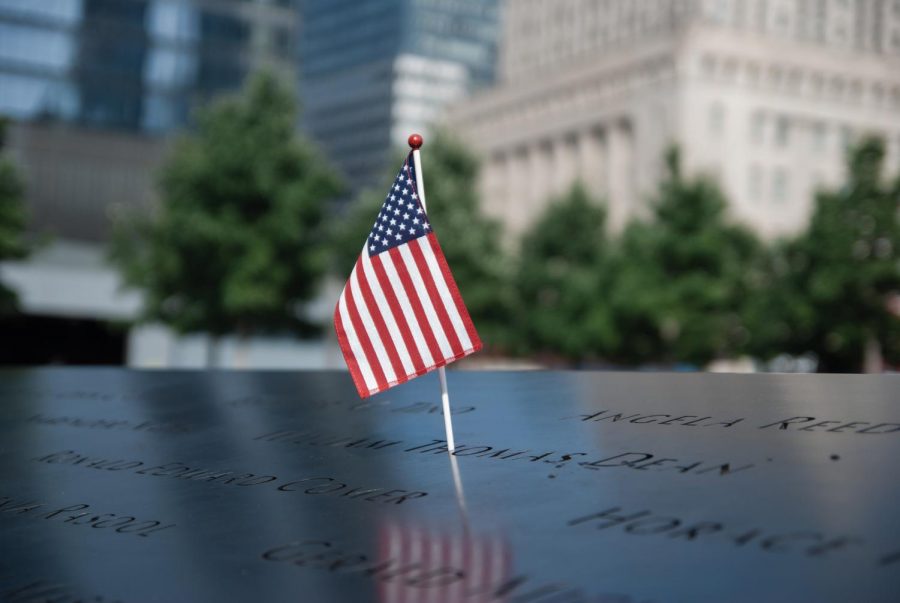 Pictured is a flag that was planted to memorialize victims of the 9/11 victims.

Editor’s Note: This story was originally published in the Northern Iowan on Sept. 14, 2001

WASHINGTON- In a staggering attack on the United States, terrorists struck Tuesday at the symbols of American financial and military might, using hijacked jetliners as suicide missiles to level the twin towers of the World Trade Center in New York City and blast into the Pentagon beside Washington, D.C.

President Bush vowed “to hunt down and punish those responsible for these cowardly acts.”

Hours later, explosions rocked Kabul, the capital of Afghanistan and the host country for the prime suspect behind the Kabul explosions.

Intelligence officials said initial information pointed at Osama bin Ladin as the chief suspect in the attacks on Washington and New York.

Bin Ladin is a Saudi exile who heads the Al-Qaida, a global terrorist network that has targeted the United States repeatedly.

Bin Laden is blamed for masterminding the bombings of U.S embassies in Kenya and Tanzania in 1998, and is suspected in the bombing of the U.S.S. Cole in Yemen last October. He is believed to be based in Afghanistan.

The loss of life from Tuesday’s attacks is likely to be horrendeous. As many as 50,000 people could have been in the two 110-story skyscrapers, and thousands in the Pentagon. Several hundred people aboard the four airliners perished as well.

The grim toll was almost certain to surpass the 2,403 who were killed in the surprise Japanese attack on the U.S naval base at Pearl Harbor, Hawaii, on Dec. 7, 1941, and the 167 who died in a domestic terrorist bomb attack on a federal building in Oklahoma City on April 19, 1995.

The attack was likely to have a similarly jarring effect on a stunned nation, as Americans hunker down, suddenly unsure of the safety of their skies. Talk turned quickly to retaliation and even war.

“If you can do this to the U.S.A. and get at two symbols of the strength of America,” said Sen. Chuck Hagel, R-Neb.,”that tells you essentially we are at war.”

“Standing in a park near the evacuated Capital, Sen. John Warner, R-Va., the senior Republican on the Senate Armed Services Committee, said, “This is our second Pearl Harbor, right here in the nation’s capital.

“This story has been written in fiction and now it’s before us as reality. Our lifestyle will never be the same again. We’ll need to restrike the balance between the exercise of our freedoms and security pressures to protect this nation.”

As the U.S. military was ordered on highest alert world wide, a sense of siege spread quickly across the land. All the U.S. air traffic was grounded do for the first time in history, financial markets closed, high profile buildings such as the Sears Tower in Chicago were B evacuated, and telephone circuits overloaded as families tried to check on loved ones.

After cutting short a Florida trip to head for the security of nearby Barksdale Air Force Base in Louisiana, President Bush told Americans, “Freedom itself was attacked this morning by a faceless coward, and freedom will be defended…. Make no mistake; the United States will hunt down and punish those responsible for these cowardly acts.”

He said, “The resolve of our great nation is being tested. But make no mistake, we will show the world that we will pass this test.”

The cunning and well- coordinated attack started with nearly simultaneous hijackings of four commercial jetliners, which had taken off within 12 minutes of one another. All took off from East Coast airports and were fully loaded with fuel for transcontinental flights.

The first jetliner, apparently American Airlines flight 11 from Boston, crashed into the north tower of the World Trade Center about 8:45 a.m., start ing a fire. As a horrified nation watched the fire on television, a second jetliner appeared in the sky 18 minutes later, slamming into the other tower in a crash of fire and smoke.

Subsequent explosions col lapsed each tower within another 90 minutes.

Shortly after the planes crashed into the twin towers at the heart of New York’s financial district, a third jetliner slammed into one side of the Pentagon. It was the 60th anniversary of the day in 1941 when ground was broken for construction of the five-sided U.S. military headquarters.

That one was apparently American Airlines flight 77, bound from nearby Dulles International Airport for Los Angeles.

A fourth hijacked jetliner, its target unknown, crashed outside Pittsburgh.

In New York, officials sealed Manhattan Island, closing bridges and tunnels leading into the city. Rescue workers there rushed to fight the fires and evacuate people when a subsequent explosion ripped through the south tower, disintegrating its upper floors and hurtling tons of concrete, metal, glass – and presumably bodies – into the streets below.

Debris and smoke barreled through the canyon-like avenues, sending people running as everything within blocks became covered with ash.

Near the Pentagon, Michael Walter, a television correspondent for USA Today Live, was stuck in traffic. He got out of his car to see what the problem was and looked up to see an airplane perhaps only 20 feet over his head.

He was able to see the big red letters “AA” on the side of the plane. That is the logo of American Airlines.

“Whoever was flying that plane had every intention of slamming into that building. It was going very, very fast,” Walter said.

The plane clipped a light pole before crashing into the Pentagon.

Defense Department spokesman Terry Mitchell likened the feeling inside to an earthquake, adding that most workers were evacuated. Among those remaining inside was Secretary of Defense Donald Rumsfeld.

For the first time in American history, the Federal Aviation Administration ordered all aircraft out of American skies at 9:25 a.m. The order forced those on the ground to stay where they were and those in the air to land, including medical helicopters. Flights crossing the Atlantic from overseas were diverted to Canada.

By 2:15 p.m., there wasn’t a commercial or private aircraft in the air anywhere over the United States – except for military planes and Air Force One, Bush first spoke Tuesday from Florida.

Today, we’ve “This is a difficult moment for America. had a national tragedy,” Bush said at what was supposed to be an event in Sarasota pitch. ing his education proposals. After leaving Florida, the president flew to Barksdale Air Force Base in Louisiana, where he taped a second announcement. to the nation. Soon after that, he flew to Off the Air Force Base in Nebraska, where he held a teleconference with national security aides. In the late afternoon he left Nebraska to return to the White House, from which he planned to speak to the nation Tuesday night. Since May, U.S. officials have worried that bin Laden was planning an attack against Americans, a fact reiterated in a worldwide caution issued by the State Department only last Friday.

But the locations of the attacks appeared to catch U.S. intelligence officials by surprise. Friday’s warning emphasized possible attacks against American citizens or interests abroad – but not necessarily at home. It said it had unconfirmed information that terrorists might strike at the American military, lishments frequented by them in Japan or Korea.