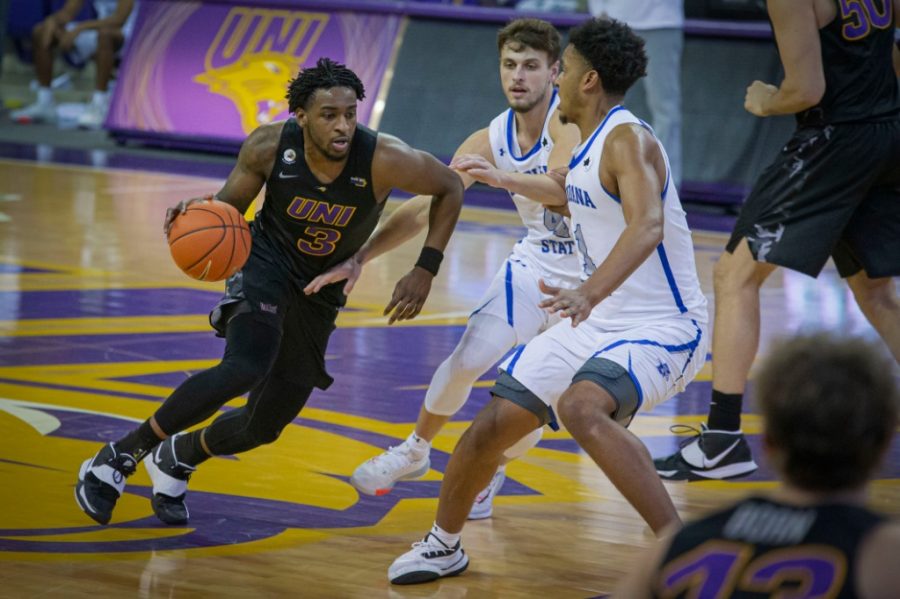 The UNI men's basketball will return several key players from a year ago, including AJ Green and Tywhon Pickford (pictured aboce).

After finishing 10-15 in what many would consider a disappointing season in 2020-21, the UNI Panthers men’s basketball team is ready to once again prove themselves as one of the top teams in the Missouri Valley Conference in 2021-22. With the release of the MVC schedule, we now know UNI’s full schedule for the upcoming season. Here is a look at some of the key games for the Panthers, both conference and non-conference.

UNI will open its season with the non-conference portion of their schedule, and their season opener will be at home against Nicholls State on Nov. 9. They will then go on the road for their only scheduled matchup against a member of a Power 5 conference, a Nov. 17 game against the Southeastern Conference’s Arkansas in Fayetteville, Ark. That’s followed by a trip to Bonaventure, N.Y., to take on St. Bonaventure on Nov. 27, before playing a conference game on Dec. 1 in Peoria, Ill. against Bradley.

The Panthers then return home for matchups against Richmond and Jackson State on Dec. 5 and Dec. 14 respectively, before heading to West Virginia to take on Marshall University on Dec. 18. Their non-conference schedule will conclude when they take a trip to Hawaii to compete in the 2021 Hawaiian Airlines Diamond Head Classic. The event will start on Dec. 22 and is scheduled to run through Christmas Day. They are currently scheduled to face Liberty in the first round.

UNI’s first big conference test will be on Jan. 22 when they host the Drake Bulldogs. UNI was swept by Drake in their two games last year, with Drake ultimately receiving an at-large bid to the NCAA Tournament. The Panthers will also travel to Des Moines to take on the Bulldogs on Feb. 5.

The other big challenger in the conference for UNI will be the Loyola-Chicago Ramblers. Loyola was another team that swept the Panthers last year, and they ultimately shocked the nation in the NCAA Tournament, defeating top-seeded Illinois in the Round of 32 before falling in the Sweet 16. The Panthers will travel to Chicago to face the Ramblers on Feb. 13, before hosting them at the McLeod Center in UNI’s regular season finale on Feb. 26.

With star player AJ Green returning from injury, UNI will look to reassert themselves as one of the teams to beat in the conference. In order to do that, it will be critical for them to win the early conference games, as well as win some of the games against the reigning conference powerhouses, Drake and Loyola.