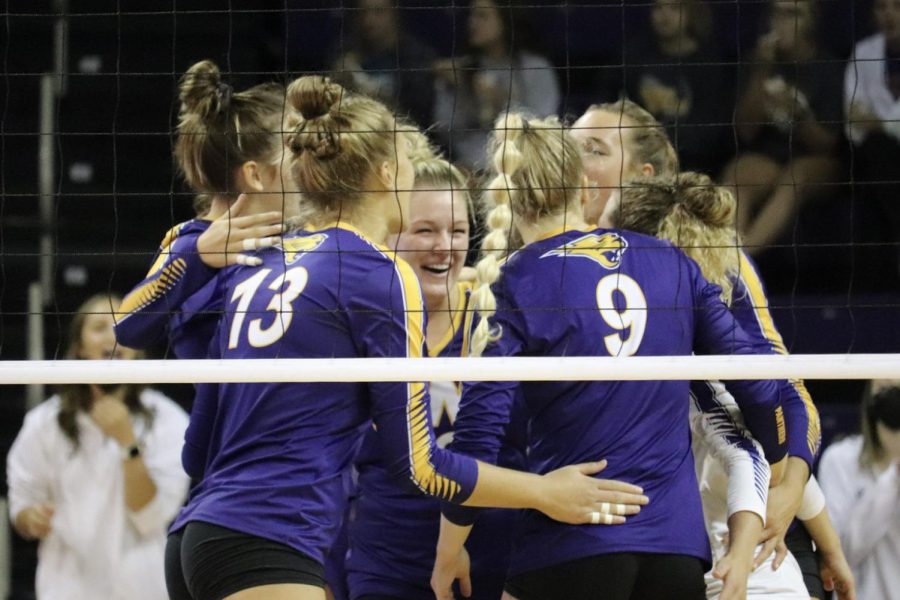 The UNI volleyball team defeated Texas-San Antonio but fall to Wright State and Marquette over the weekend at the Marquette tournament.

The Panthers opened the tournament on Friday with a match against Wright State out of the Horizon League. Things started well for the Purple & Gold as they took the first set by the score of 25-19. Unfortunately, that set was the lone bright spot as Wright State took the next three, along with the match. The silver lining in the loss was that the Panthers were able to rack up season-high totals in terminations and digs, with 51 and 87, respectively. With 32 assists in the match, freshman Taylor Alden eclipsed the 1,000 career assist mark. Redshirt freshman Kaylee Donner netted 26 digs, setting a new personal record.

The team couldn’t commiserate for too long as they had a second match on Friday, this time against the University of Texas at San Antonio. The opening two sets were split between the Panthers and RoadRunners. After that, the Panthers were able to take the next two and win the match 3-1. The season-high record of 51 terminations set earlier in the day didn’t last for long as the Panthers totaled 52 against UTSA. Emily Holterhaus notched 13 terminations and matched a career-high in aces with four.

The final match of the tournament occurred on Saturday against the hosts, the Golden Eagles of Marquette. The first set was tightly contested, with multiple lead changes and 10 ties. The Golden Eagles were able to secure the set with a 5-0 run at the end. That win gave Marquette the confidence to dominate the next two sets, winning each by double digits, completing a 3-0 sweep set sweep. The Panthers were only able to muster a 0.077 hitting percentage with 26 total kills.

Despite dropping two of their three matches, the Panthers finished the tournament in third place. Junior Jenna Brandt was named to the all-tournament team and led the team in setter assists in the final match.

The tournament marked the end of the non-conference portion of the season for the Panthers, as the rest of their matches will be against Missouri Valley Conference opponents. The team will be back on Sept. 24 and 25 as they host Bradley University and Illinois State University, respectively. The match against Bradley will be on Team Poster Night, and the match against Illinois State will be the annual Gold Game.