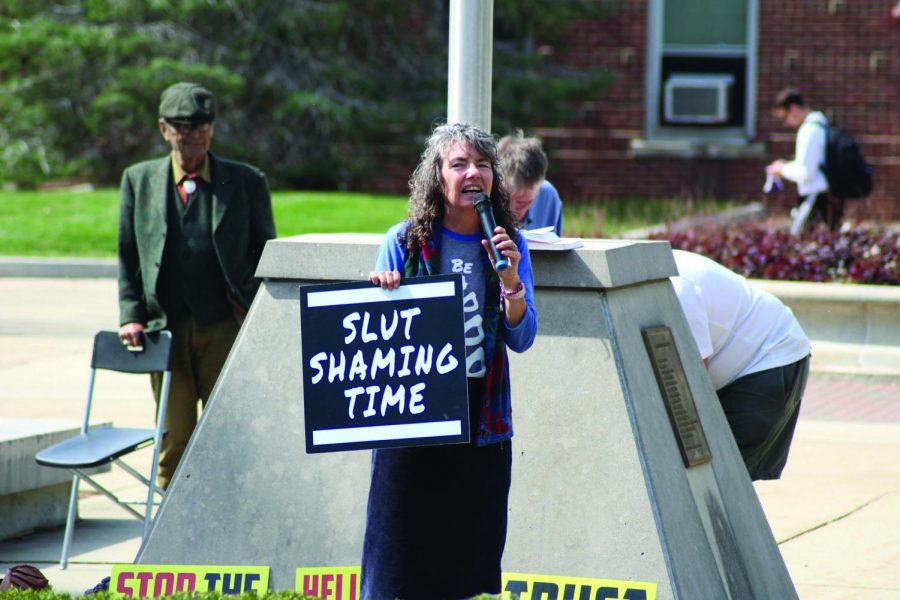 Evangelical preacher Sister Cindy visited campus Friday and spoke to a crowd of students on Lawther Field. Her husband, Brother Jed, is pictured in the background.

Preacher and TikTok star Sister Cindy visited UNI’s campus Friday, speaking at Lawther Field in front of the West Gym. Her husband, Brother Jed, along with some of their friends were also on campus to push their agendas.

She drew a large crowd of curious students, including a student dressed up as Jesus and a student in a dinosaur costume with a pride flag cape. The pair later started kissing in front of the crowd.

Cindy Smock or “Sister Cindy” has gained considerable fame, and has over 300,000 followers on TikTok. She preaches about being a “ho no mo” on college campuses around the country and has been preaching for more than four decades. The goal of her messages is to make sure college students have safe sex or practice abstinence only, making sure girls “keep their legs closed.”

Many students expressed their confusion as Sister Cindy continued to preach. “I don’t know where she’s going with this,” one student said.

Her religious beliefs about abstinence and sex were made abundantly clear throughout her speech. “You were not made to be a ho, you were made to know God,” she said. “There are bipolar girls everywhere.”

The crowd often engaged with Sister Cindy sarcastically, heckling and cheering her on. At one point Sister Cindy yelled. “Certified freak,” and the crowd chanted back, “Seven days a week.”

Sister Cindy has been visiting Iowa campuses the past week. She went to Iowa on Monday, Grinnell College on Tuesday, Drake on Wednesday, Iowa State on Thursday and UNI on Friday.