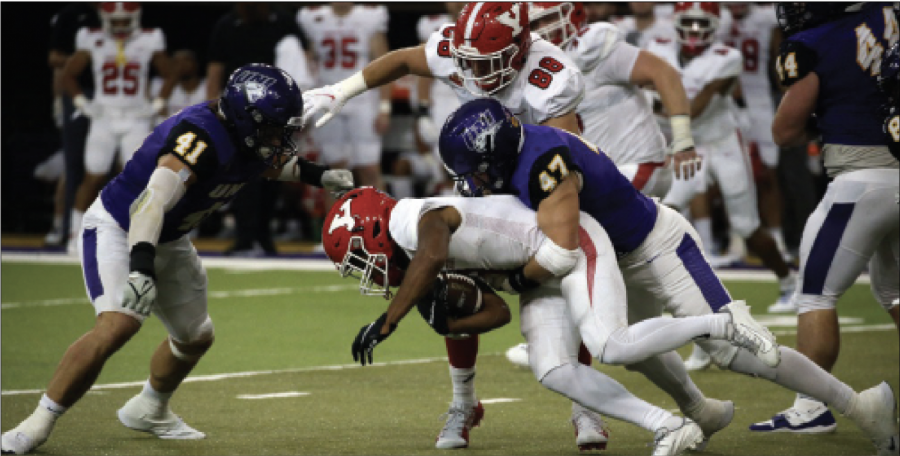 The UNI Panthers won their third straight game against Youngstown State for homecoming, 34-7.

This past Saturday marked the beginning of conference play for the University of Northern Iowa, as well as homecoming, as they took on the Youngstown State Penguins. It was a great day for the Panthers on both sides of the ball, as they were able to come away with a 34-7 victory, their third straight since losing their opening game to Iowa State back in early September.

“We’ve made a lot of progress over the last two weeks,” said UNI head coach Mark Farely in the post-game press conference.

“The deep ball was there multiple times and we’ve got enough receivers that we can go left or right, high or low. Then you look at our running game with Dom (Williams), Braderick (Shaw) and Vance (McShane). We’re fortunate to have all these guys,” Farely added.

It was all Panthers early on as they were able to end the first quarter with 10 unanswered points. Redshirt Sophomore Theo Day was back under center again following his impressive performances in the past two games. After their first drive ended in a punt, Day was able to find Vance McShane down the middle for a 50-yard touchdown, and Kicker Matthew Cook was able to convert a field goal on the next drive to put UNI up 10-0 early on.

The Penguins were still unable to answer in the second quarter, as they never ventured deep into UNI territory.

The Panthers were then able to score on the very first play of their second drive of the quarter, with Dom Williams rushing 58-yards for the touchdown. Northern Iowa kept that momentum going on the defensive end as Jared Brinkman recovered a fumble on the 46-yard line. Bradrick Shaw capitalized on that field position, rushing 30 yards for a touchdown. The first half ended with a touchdown pass from Day to Isaiah Weston, giving the Panthers a 31-0 advantage on the scoreboard. At this point, UNI had amassed 320 total offensive yards.

With a comfortable lead, the Panthers were able to take their foot off the gas in the second half. Matthew Cook made his second and final field goal of the day to cap off UNI’s first drive in the third quarter. It then turned into a battle of interceptions as Riley Van Whye picked off Youngstown State, followed by Penguins picking off Theo Day the very next possession. Things were getting a bit chippy as well, with UNI getting two consecutive unsportsmanlike penalties at the end of the quarter.

The Panthers won the interception battle in the fourth quarter as Eric Mooney picked off Youngstown State. The Panthers didn’t do much with the ball, going four and out on all three of their drives. The Penguins found themselves in the UNI red zone for the first time at the very end of the game, and they prevented a Panther clean sheet with a short run into the endzone. The game ended shortly after, with Northern Iowa claiming victory by the score of 31-7. The Panthers were able to tally 388 yards of total offense, as well as three turnovers to add to their vast collection.

Northern Iowa will have a tough test ahead of them next week as they travel to Fargo to take on North Dakota State. The Bison are undefeated so far this year, as they just knocked off in-state rival North Dakota in their conference opener. That game will also mark homecoming for the Bison, something the Panthers will look to spoil.

It was also announced that longtime radio broadcaster Gary Rima will be retiring at the end of the 2021-22 men’s basketball season. Rima has been calling UNI football, men’s basketball, and baseball for the past 29 years, and has become famous for his catchphrases “Oh baby, I love this team” and “Kaboom!”