UNI falls to North Dakota State on the road 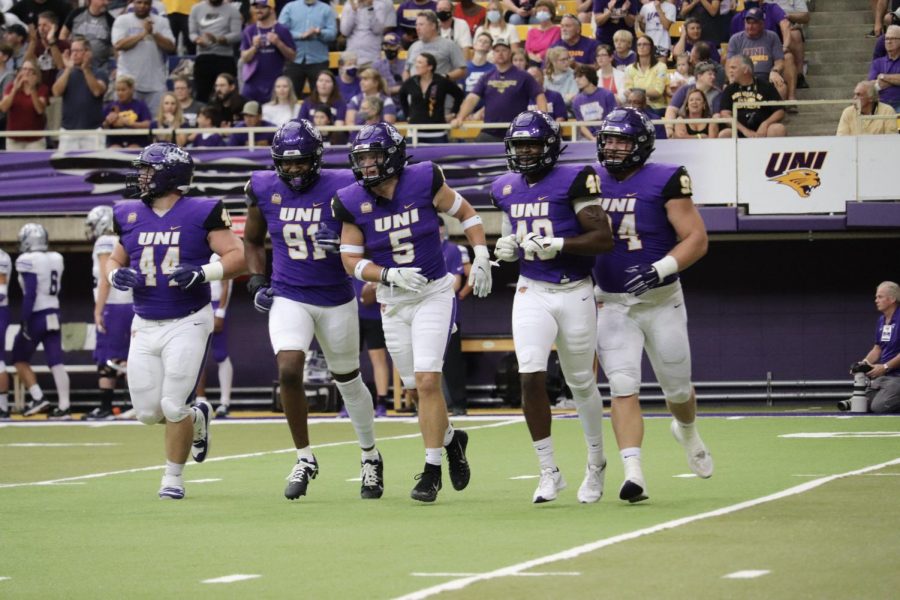 UNI hit the turf Saturday in an away game with the North Dakota State Bison (NDSU). UNI came into the matchup ranked 12th in the FCS Coaches Poll with NDSU coming in fifth. It was a huge game for both teams, as both were undefeated in Missouri Valley Conference (MVC) play. The MVC could send several at-large bids to the playoffs, so this game between high-ranked opponents had playoff implications.

The first quarter began with some back-and-forth action. The first score came off an 85-yard pass to the Bison’s Christian Watson for a touchdown, giving NDSU a 7-0 lead. After getting the ball back after a UNI punt, the Bison marched back up the field, using a 38-yard pass to get to the UNI 11. The UNI defense was able to hold NDSU to a field goal, making it 10-0.

The Panthers came into the second quarter down 10-0 but quickly turned things around. At the end of a lengthy drive, Day found Isaiah Weston in the end zone for a touchdown to cut the lead to three. North Dakota State drove down the field on their ensuing possession, but missed a field goal attempt, giving the ball back to the Panthers. On third down with three yards to go, Day had a huge run that got the Panthers down to the 20 of NDSU, and a 33-yard field goal tied the game up at 10. The Bison added one more field goal just before halftime to get the score up to 13-10.

After UNI was forced to punt again, NDSU made a momentum-changing drive that took only three minutes and 15 seconds and led to a touchdown to put the Bison up 20-10 on a Patterson run. The next possession saw Day fumble it, giving the Bison excellent field position, which they capitalized on with another touchdown, making the score 27-10. UNI answered with a drive involving a 69-yard pass to Weston and a short touchdown run from Dom Williams which left the score at 27-17 at the end of the third quarter.

Patterson had a huge run on third-and-eight in which he was nearly sacked but managed to break free and get the first down. UNI forced NDSU into a fourth-and-one, but the Bison converted on fourth down. A short touchdown all but sealed the game at 34-17. UNI tacked on a garbage time field goal to give a final score of 34-20.

“They’re an excellent team. They are going to do what they do and do it well, and they are incredibly tough,” said UNI head coach Mark Farely of the North Dakota State. “They stick to what they believe in and they play it well,” he added.

The Panthers will return back to the UNI-Dome on Saturday, Oct. 16 when they host South Dakota at 4 p.m. This will be during Family Weekend and fans are encouraged to wear white for the white-out game.