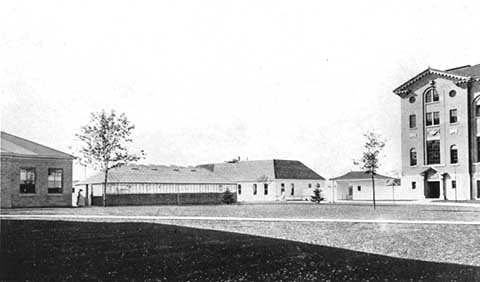 Editors Note: This is from the Normal Eyte printed on Sept. 19, 1906. The article discusses the finished of the greenhouse located between the current ITTC and where a power plant was located.

Louis Begeman was a science professor; he began teaching at Iowa State Normal School at 1899, and by 1912 was the head of the physics and chemistry departments.

The greenhouse finished in 1906 is located where the extension of Maucker Union is now. The greenhouse included an aquarium which contained wildlife from a pond. Included with the wildlife, they had a alligator named Allie. She arrived in 1921 and by 1924 she was six feet long.

If about January 1st, some irresistible impulse seizes Begeman, and you catch flitful gleams of his coattail emerging from old South Hall, and rapidly disappearing around the corner of the New Building, don’t get alarmed. It does not mean fire for the edifice is fire proof It only indicates that the Science Hall is finished, equipped and and ready for action.. No pains have been spared in making Normal’s campus attractive. Her large spreading trees, graded lawns, the splendid walks and drives all contribute to its beautiful appearance. The new school year brings a $75,000 structure to grace our premises. This is the first building here to be entirely fire proof. The floors, ceiling and roof being composed of concrete. A new addition, in the form of a greenhouse, will greatly inforce the natural science department. Heretofore we have been somewhat handicapped in that general botany could not be offered in the winter. This difficulty will soon be alleviated and the study of botany may be pursued the year round. The advantages offered by our school, with its superior equipment in apparatus and excellent faculty of over 65 members are rarely called and no where excelled.