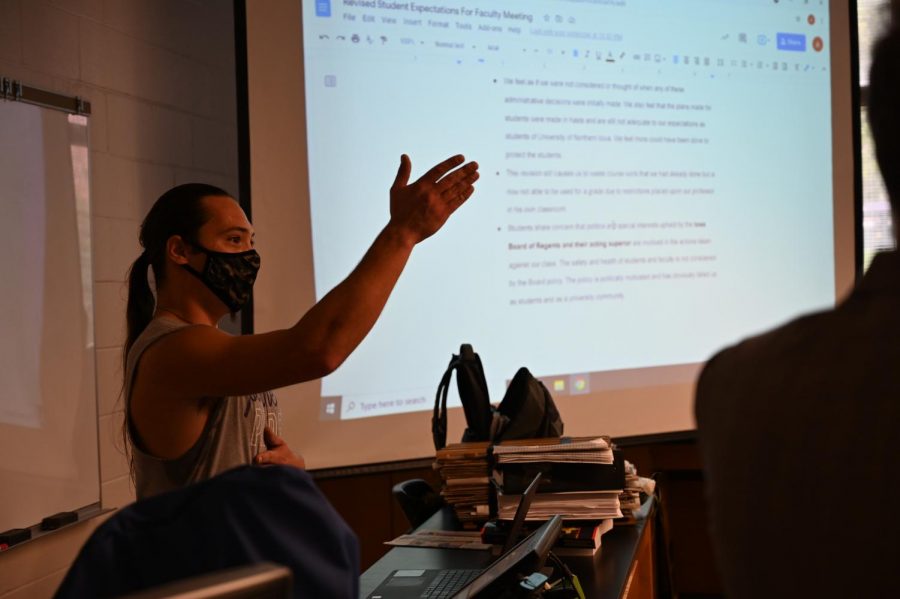 A student of O'Kane displays the amount of work they have already completed this semester. NISG passed a resolution condemning administration's handling of the removal of O'Kane, as students were left without a professor and did not feel seen or heard by administration.

During the brief power outage in Cedar Falls, members of the Northern Iowa Student Government (NISG) piled into the well lit University Room for their eighth meeting of the academic year on Wednesday, Oct. 6. Sam Caughron marshalled the gathered students with a bang of the gavel and the meeting began with the weekly reports from NISG directors. Most notably, the Speaker of the Senate Report notified the students of the seat removal of a Senator due to breaking NISG by-law attendance policy.

The student government then turned to contingency fund requests from university student organizations. Three hundred and forty follars was requested by the UNI TESOL Club for equipment including a club table cloth and vertical banner.

The Organization and Finance Committee requested $5,000 be set aside in an Accessibility Fund as a separate pool of money from the Contingency Fund in order  to address accessibility needs related to UNI club activities.Funding for these accessibility needs could then instead be approved through the Organization and Finance committee instead of having to process it through a vote by the Senators. All contingency fund requests were approved by a vote of 9-0-1.

After these requests were voted on, the senators were faced with the matter of voting on the appointment of

Noah Hackbart for External Relations Committee Chair and James Carolus for the Chair of Government and Legislative Affairs.

Each sitting senator was officially appointed after no debate and a vote by a count of 9-0-1.

Speaker of the Senate Sam Caughron then introduced what would become the lengthiest discussion of the night, a Senate resolution sponsored by Director of Diversity Leila Masinovic and Senator Caroline Christensen. The Senate resolution focused on the recent events surrounding the University of Northern Iowa’s handling of the suspension of Professor Steve O’Kane.

NISG invited students to the meeting to share their thoughts on the resolution and their experience related to the incident.

As reported on by the Northern Iowan’s Nixson Benitez, O’Kane was removed from the classroom by the university due to violating the Board of Regents policy banning mask mandates.

O’Kane required his students to wear  masks in his classroom as he has health issues.

He threatened to lower their grades if students did not comply. The university was notified about his mandate and removed him from the classroom. O’Kane teaches Plant Systematics, a required four credit course for graduation in certain majors.  Professor Steve O’Kane now teaches his Plant Systematics course and lab online along with another qualified professor handling in-class duties.

However, relayed by Abigail Malone, a senior in O’Kane’s Plant Systematics class, the students felt as though the university handled the affair poorly and with little student consideration. His suspension brought doubt into whether some of the students would graduate and inflicted more stress upon the students.

Malone stated to the members, “I think there are two issues here, and the one is whether or not you agree with Dr. O’Kane’s punishment, that is one we are putting to the side. The other issue

is whether or not you agree with us students being punished as well. Because in a way we were punished and we did not break any rules. Supporting us as students and standing with us would mean the world to us.”

Taking this into consideration, members of NISG resolved to give a statement of support for the students and voice their concerns over how the university acted. Following extended debate amongst the student government and the input from the impacted students, the senate resolution passed with a vote of 8-0-2 and with no further business, the meeting adjourned for the night.

NISG meets every week at 8 p.m. on Wednesdays in the University Room of Maucker Union. These meetings are free and open to the public.

Anyone interested in becoming involved in NISG and the activities of the organization can visit nisg.uni.edu for supplemental information or check back in next week’s issue for more ongoing coverage related to NISG, their initiatives and up-to-date organization news.