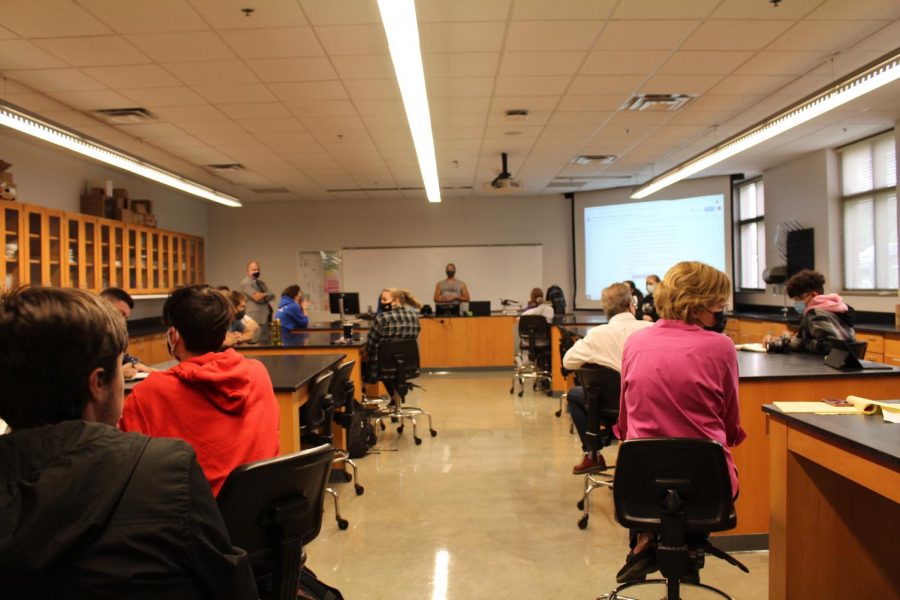 Students of O'Kane, faculty and administration meet the discuss issues concerning O'Kane removal from the classroom.

On Sept. 29, at 8:31 p.m. the students of Professor Steve O’Kane’s Plant Systematics received an email that their professor had been removed from their class.

O’Kane required his students to wear masks in his class and enforced his policy by threatening to lower lab grades if students did not comply. In response, administration removed O’Kane from teaching his classes in-person this fall and gave him a “needs improvement” rating which makes him ineligible for merit pay. He is also required to complete “faculty obedience training,” and was threatened with termination if he does not comply with university and Board of Regents policy.

The removal of O’Kane from in-person teaching left many students wondering what the future of their course would look like and if they would be able to receive the credit they required for graduation. O’Kane has been at UNI for 26 years and is uniquely qualified to teach his course, as he has specialized expertise on plant systematics and evolution.

As reported by Northern Iowan’s Nick Baur, senior Abigail Malone in O’Kane’s Plant Systematics class felt like administration handled the removal of O’Kane from the classroom poorly, and that student voices were not heard when the decision was made. In a statement to NISG members, Malone emphasized the undue consequences of O’Kane’s removal on his students.

Students of O’Kane met on Oct. 5 to discuss their feelings on how to approach their situation.

They also met Oct. 7 and invited faculty and stakeholders of the university to listen to their list of demands.

Theresa Spradling, the head of the biology department, was in attendance along with United Faculty Vice President Chris Martin, Associate Provost John Vallentine and faculty from around campus. Many of the professors commended students for their efforts in staying together throughout this unprecedented time.

“I just want to say thank you to you guys for organizing in the way that you have and presenting your concerns,” Spradling said. “The way that you have, you’ve been very clear about this and I can tell you put a lot of thought into it.”

Aaron Boies, another student of O’Kane, has tried to rally his peers to get their voices heard. However, several students feel they have largely been overlooked. Many students have expressed a desire for a refund by administration for their class.

A statement released by UNI referenced the Board of Regent’s policy that bans mask mandates on campus, which justifies disciplinary action against O’Kane.

“Under Board of Regents directives, neither the university nor faculty can mandate that masks be worn on campus, including in classrooms,” the statement said. “UNI has processes in place to address violations of university and Board of Regents policy. After an internal review of actions by a single faculty member, the university has taken appropriate measures to uphold compliance with those policies on campus.”

United Faculty, the union representing roughly 600 UNI faculty members, has filed a complaint against the Board of Regents and UNI for their decision to discipline O’Kane.

As reported in the Green Gazette, United Faculty argues the regent policy prohibiting mask mandates on campus is not a law, but a guideline.

“There are so many things wrong with this decision it is hard to know where to start,” United Faculty President Becky Hawbaker and Vice President Chris Martin wrote in a letter to UNI’s faculty members.

“The discipline imposed is a disproportionate, unnecessarily disruptive, political show of force that harms O’Kane’s students and their learning, and communicates to faculty that UNI/BOR will not stand up to external threats to our core values like academic freedom, peer review in evaluation, due process, and the core mission of transformative education.”

Ultimately, those in O’Kane’s class are concerned politics was more of a priority than education in the decision to discipline their professor.    Boies acknowledged the importance of listening to student voices throughout this situation. “The policy is politically motivated and has obviously failed students in the university community,” Boies said. “We also demand that you hear us. But not only hear us, understand us. And if you don’t understand us, we will attempt to school you in our line of thought like scientists do.”

There is also growing concern with other professors possibly implementing mask mandates within their classrooms as the flu season begins.

“We as students demand that the University of Northern Iowa create policy and protocol to protect students first, specifically for this type of situation of any student suffering academic disruption by administrative actions upon the professor during the semester.”

Northern Iowan Student Government (NISG) passed a resolution (8-0-2) at their Oct. 6 meeting, recognizing the unintended consequences students faced as a result of administration’s actions, and also voicing support for O’Kane’s students and their ultimate decrease in quality of education.

“I had no idea about the effect it had on these students until they introduced it to us at this meeting when they requested representatives of the student government to be (at the students’ first meeting Oct. 5), and that’s really it was really disheartening,” Speaker of the Senate Sam Caughron said. “The university in a week’s time came to a resolution to allow the students to continue their education. However, these students also express that it still degrades the quality of the education that they got. It does not erase the stress, anxiety, the multitude of feelings that they had in the amount of time where they were informed by the professor himself – they were not informed by the institution.”

Ultimately NISG has been trying to hold UNI’s administration accountable.

“I think this issue is not resolved,” Senator for the College Humanities Arts & Sciences Noah Hackbart said.  “With Professor O’Kane teaching online it is not guaranteed the same impact of education will be delivered through a week’s worth of lost time.”

The university has come to an agreement to work with  Professor O’Kane in moving his class online, with Professor Julie Kang handling in-person labs.

“I have absolutely no motive for stepping in for Dr. O’Kane in his classroom other than to help a fellow colleague and his students,” Kang said. “I genuinely care for our students and their wellbeing and I want them to have the best experience they can while they’re at UNI. Regardless if this were the first week of class or the eighth week, taking on the extra workload isn’t something I was or am concerned about.”

O’Kane expressed he was happy he would be able to continue to interact with students, even if it was virtually.

“The ‘agreement’ I have reached with the administration is merely acceptable and was made because of my concern for my students’ learning,” O’Kane said. “At least this way I can interact with the students, which gives me great joy, and lets me deliver lecture material. The lab situation is less than ideal as the students will spend less hands-on time with plant materials.”