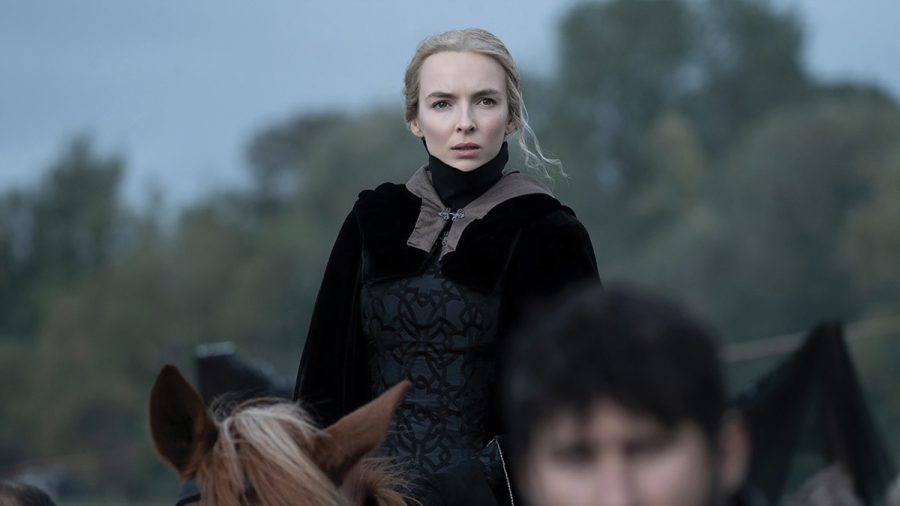 At 83-years-old, Ridley Scott is quite the inspiration. With a directorial career that spans nearly 2,500 commercials and countless films – such as “Alien,” the Best Picture-winning “Gladiator” and “The Martian” – no one would blame him to hang it all up and retire to the countryside. But Scott has never known the definition of the word “break” and has tasked himself with increasingly tougher work the more he ages, with 2021 seeing the release of two major tentpole films in “The Last Duel” and “House of Gucci.” The latter of that pair bows at Thanksgiving, with the former hitting theatres this past weekend.

In an extended prologue surrounding the titular bout between Jean de Carrouges (Matt Damon) and Jacques Le Gris (Adam Driver), “The Last Duel” sets up what to expect, such as the gray dourness of the setting and story, lensed exquisitely by Scott’s longtime cinematographer Dariusz Wolski. Atop both of the knights is the petulant King Charles VI, who is more than giddy for some bloodshed. And standing between the duelists is Marguerite de Carrouges (a terrific Jodie Comer), whose fate is linked to the outcome. Before any of the men meet their maker, we flashback 16 years prior, to a time when they were dear friends.

Broken up into three chapters, the film follows the unique perspectives of the three central individuals as it tracks the events that led to the duel. This “Rashomon” inspired structure is where Scott, along with Damon and Ben Affleck in their first credited screenplay since “Good Will Hunting,” show off their brilliance.

The first chapter is “The truth according to Jean de Carrouges.” In Jean’s eyes, he’s a righteous knight that has been wronged by those that deserve less than him. Despite his proud military record, his squire Jacques is shown favor by Count Pierre (a bleach blonde Affleck), who gifts Jacques with a vast piece of land once promised to Jean. The growing resentment between the two reaches a tipping point when Jean’s new wife, Marguerite, accuses Jacques of rape.

But “The truth according to Jacques Le Gris” sees things differently. Jean is headstrong and foolhardy, easily leading Pierre to favor Jacques’s worldliness. Jacques feels that Jean is wasting the sophistication of Marguerite and that he is the only person that truly appreciates her. Therefore, his sexual act cannot be classified as rape, since the two of them are meant for each other.

Not that it’s much of a spoiler of what the actual truth is, but “The truth according to Marguerite de Carrouges” displays the words “the truth” for an extra couple of seconds before fading away. This chapter is written by the talented Nicole Holofcener, as Damon and Affleck felt they were unqualified to write from a female perspective.

Marguerite’s truth sees both Jean and Jacques as squabbling children using the pretexts of duty and honor to mask their cruelty. The rape scene is played again, this time amplifying the excruciating horror of the act, prompting a necessary uncomfortable feeling within the viewer. Her accusation against Jacques is met with hostility from both Jean and the rest of France, as rape is not considered a crime against a woman, but a property matter.

The greatness of the film’s structure is that it creates a puzzle where the pieces are constantly shifting in size and placement. Even a simple act, such as a handshake between Jean and Jacques, is seen from three angles, each eliciting a different response.

It’s fascinating to watch as the web of lies and truth becomes increasingly difficult to parse, with Scott supplying the necessary inertia to keep the film moving at a great pace.

And the final duel more than lives up to expectations, especially when compared to the high bar Scott has set for himself within his filmography. There have been only a handful of final battles that weren’t already decided by the plot before they begin, and this is one of them. There’s an exciting amount of tension as the knight’s exchange blows in agonizing brutality.

Bolstered by spectacle and substance, “The Last Duel” is one of Ridley Scott’s finest films. It’s one of the few films in 2021 to exceed my expectations, and one of the few blockbusters of the modern age to be propelled by collaborative artistry, rather than preconceived properties and overblown budgets.