UNI drops two on the road vs. Redbirds, Braves 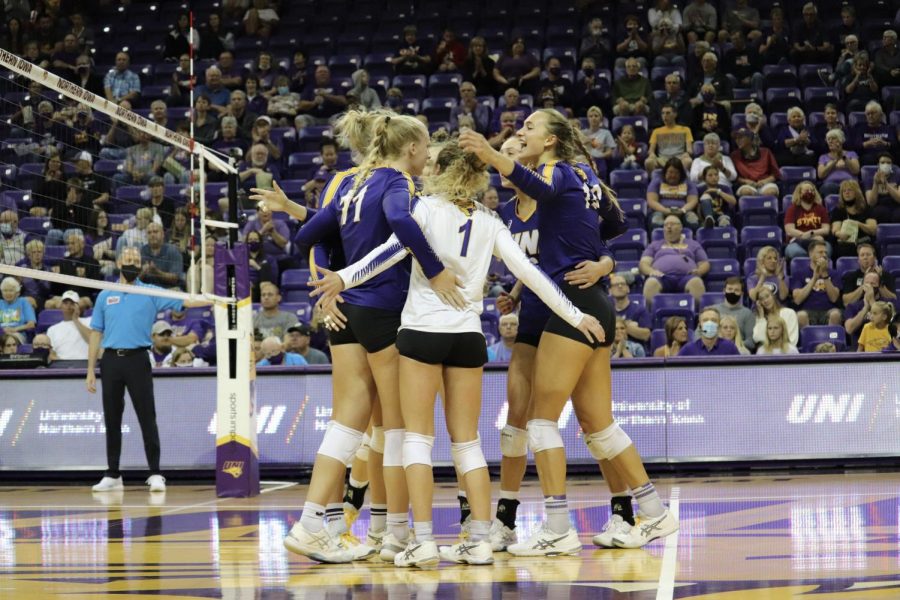 UNI battled through two hard-fought volleyball games over the weekend but fell to Illinois State and Bradley in the end.

This past weekend, the UNI volleyball team was on the road for a pair of matches, taking on Illinois State University (ISU) on Friday and Bradley on Saturday. The Panthers entered the weekend with a record of 8-13 on the season. Despite some quality play and competitive sets, UNI couldn’t pull out either match, falling 3-0 and 3-2 respectively.

In the opening match of the weekend, the Panthers traveled to Redbird Arena in Normal, Ill. to take on the Illinois State Redbirds. The Redbirds entered the match with a record of 10-11 on the year.

The Redbirds started hot, taking four of the first five points in the opening set. However, UNI responded well to take a 6-5 lead. The set went back-and-forth until, trailing 20-19, the Redbirds went on a 4-0 run and held on the rest of the way to take a 25-22 win in set one.

The second set was very much a set of runs. Every time the Panthers went on a mini-run, the Redbirds would respond with one of their own to pull even again. Unfortunately for the UNI, ISU would get the biggest run and the final run of the set, scoring 10 of the last 14 points to win the set, 25-21, and take a 2-0 lead in the match.

The Redbirds appeared poised to run away with the set, taking a 22-13 lead. However, the Panthers managed to go on a 5-0 run to inch closer at 22-18. Ultimately, it wasn’t enough as ISU won the set, 25-19. Despite being competitive in every set, UNI lost the match 3-0.

For their second matchup of the weekend, the Panther women stayed in Illinois, traveling to Peoria’s Renaissance Coliseum to take on the Bradley Braves. The Braves entered the match with a record of 10-11 on the season.

The first set was touch-and-go, with neither team being able to pull away. The Braves managed to pull off the final run of the game, taking nine of the last 11 points to win the first set 25-18. In the second set, UNI started with a slight lead, 6-3. It was at this point that Bradley went on an 11-0 run that two Panther timeouts were unable to stop. The Braves hung on the rest of the way, taking a 2-0 match lead with a 25-16 win in the set.

With no room for error, UNI had a dominant third set. They scored 20 of the last 23 to win the set 25-9. The Panthers again managed to pull away in the fourth set, taking a 24-14 lead. The Braves gave UNI some late trouble, scoring five in a row before the Panthers finally scored the winning point, taking a 25-19 fourth set win to force a fifth and decisive set.

The fifth and final set was another competitive one, but UNI couldn’t recover from a 6-0 Bradley run, losing the final set 15-13, and the match 3-2.

With the losses, the Panthers fall to 8-15 on the season. UNI will be back in action this Friday, Oct. 29, traveling to Des Moines to take on the Drake Bulldogs.