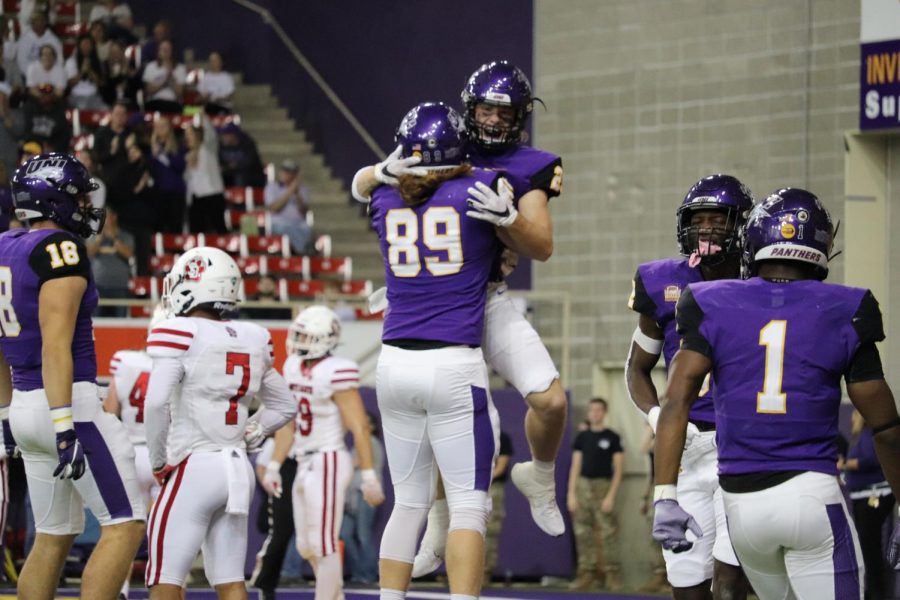 The Panthers bounced back against South Dakota State after losing to South Dakota the week prior. They knocked off the Jackrabbits 26-17 on the road on Saturday.

The UNI football team bounced back in a big way last Saturday, notching a 26-17 win over FCS No. 6-ranked South Dakota State. The Panthers improve to 4-3 on the season and 2-2 in MVFC play after losing their last two matchups. South Dakota States’ homecoming, also known as Hobo Day, brought a large crowd totaling over 16,000 fans, which was the fourth-largest in school history. Although the Jackrabbits were favored to win by almost two touchdowns, UNI got a great effort from some of their top playmakers and were able to pull off the upset in Brookings, S.D.

The Panthers started off hot with a forced fumble by redshirt junior Korby Sander on the Jackrabbits’ first drive. The fumble was recovered by UNI’s Bryce Flater, setting the Panthers up with great field position. UNI took the lead 7-0 off of a one-yard run by running back Bradrick Shaw. South Dakota State responded with a touchdown of their own on their next possession, tying the game back up at 7-7. UNI scored again in the first quarter with a Matthew Cook 55-yard field goal, which hooked through the uprights and ricocheted off of the crossbar. This was the longest field goal so far in his career, with his previous career high being a 50-yarder during his freshman season against Iowa State. The Panthers led 10-7 after the first quarter.

The second quarter would be an eventful one as both teams continued to go back and forth. The Jackrabbits tied the game up at 10-10 with a field goal of their own.  However, the Panthers fought right back with a 40-yard bomb from quarterback Theo Day to big playmaker wideout Isaiah Weston. He had a big game with four catches for 125 yards and his touchdown reception.  UNI went into halftime up 20-10 after adding another field goal from Cook to end the half.

UNI relied heavily on their defense Saturday afternoon.  The Panthers have forced 18 turnovers for the season, only second to Campbell in all of FCS. UNI linebacker Alfonzo Lambert finished the game with 10 tackles with four of those being solo tackles. The Panthers also had three different players with one sack for the game.

The Panthers will host FCS No. 4-ranked Southern Illinois on Oct. 30, 2021 at 4 p.m. in the UNI-Dome. The Panthers have won four of the five last matchups against the Salukis. UNI fans are encouraged to wear all black, as the game will be a blackout.  Fans unable to attend the game in person at the UNI-Dome will be able to access the game live on ESPN+.