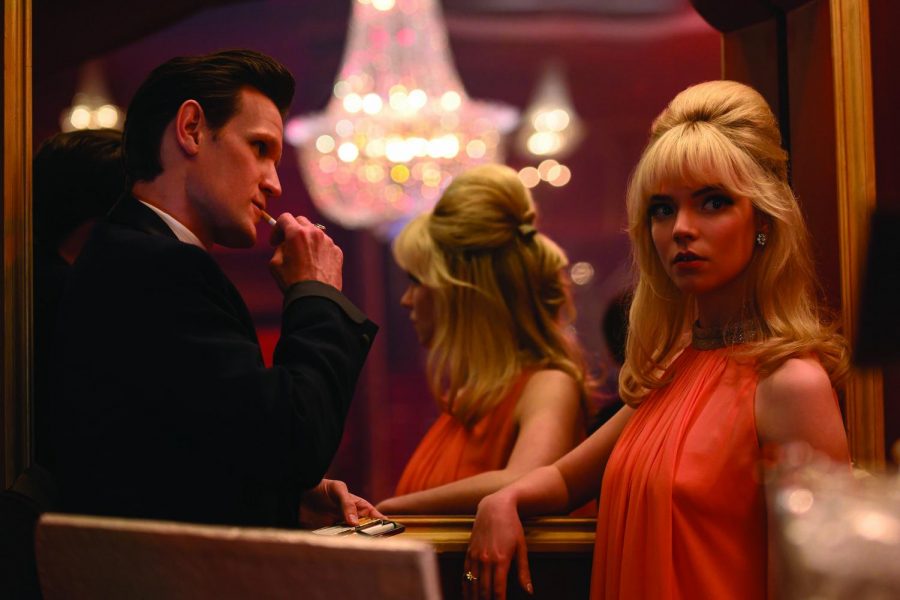 Film Critic Hunter Friesen says that "Last Night in Soho" is "anything different than a mild disappointment."

Zippy editing, deadpan comedy from Simon Pegg and Nick Frost, and a killer soundtrack. These are the characteristics that have come to define the filmography of Edgar Wright. The world first got a glimpse of those three things in 2006 with Wright’s feature debut, “Shaun of the Dead.” Other features followed, such as the cult classics of “Scott Pilgrim vs. the World” and “Baby Driver,” giving Wright a dedicated following of fans that will always be itching to see what the stylish British director does next.

For his next trick, Wright has done away with two of those three trademarks. He’s keeping the soundtrack, but trading away the duo of Pegg and Frost for Thomasin McKenzie and Anya Taylor-Joy, as well as trading in humor for horror.

The title of “Last Night in Soho” refers to the famous entertainment district located in London’s West End. From nightclubs to pubs to other seedier establishments, there’s always something to entice your interests.

For Eloise Turner (McKenzie), that’s the London College of Fashion. She has big dreams to be a designer like her late mother, but her outsider persona doesn’t mesh well with her urban classmates. Eloise finds solace in her antique off-campus apartment, where she’s free to play her 60s music and dream about a better time.

Her dreams quickly become reality, as Eloise magically gets transported back to 60s London, where she is mysteriously linked to the life of up-and-coming singer, Sandie (Taylor-Joy). These nighttime adventures allow Eloise to live the life she’s always wanted. But the honeymoon period doesn’t last for long, as these dreams gradually devolve into nightmares. The question of what is reality and what is dream begins to get muddled, and the glamorous white lights begin to run red with blood.

Coincidentally, 2021 has been the year of nostalgia for 1960s London as both this film and Disney’s “Cruella” prominently feature the setting. But while the dalmatian-laced feature carried tacky set pieces and a soundtrack that felt like someone just pressed shuffle on a “Best of the 1960s” Spotify playlist, Wright’s film has much more reverence for the era.

The dream-like sections of the film reinvigorate your love for cinema, as Wright displays some inventive camerawork throughout his extended tracking shots that weave their way throughout some of London’s historic establishments. The glittering lights and costumes are candy for eyes, and the hits of “Downtown” and “Got My Mind Set on You” serenade the ears. From a production standpoint, this is Wright’s most accomplished work.

Eloise and Wright seemed to be linked to the same fate, as the moment her fortune begins to darken also marks the same point where Wright begins to falter. Once you take away that swinging style, the film topples over as it doesn’t have any legs to stand on in terms of substance. For some people, that may not be a bad thing as Wright’s style goes a long way. But it often feels like empty calories that don’t equal the sum of their parts.

Wright – along with co-writer Krysty Wilson-Cairns (“1917”) – makes a statement about sexism and toxic men. But specific ideas are scarce and it all plays as more of a generalized blanket observation on the unfair inequality of gender, something any woman learns at some point (hopefully not first-hand).

There is no central villain to this story, with Sandy’s pimp and abuser, Jack (played by the handsomely sinister Matt Smith), being too surface-level to be perceived as an actual person, just an idea. For a while, the villains are the ghoulish spirits of controlling men. But our fear of them diminishes each time they appear, which happens much more than it should, a common problem within this 116-minute film that feels every bit as long as it is. Eventually, there are so many twists and turns that you – as well as Wright – don’t know how to feel about these characters, ending the film on a confounding question-mark rather than an exclamation point.

“Last Night in Soho” gloriously indulges in the technical eccentricities that have come to define Edgar Wright. For fans of his work, it is quite a treat to see how far he has come as a craftsman. But all that glitter is not gold, as there’s not much underneath the sheen to make this feel anything different than a mild disappointment.