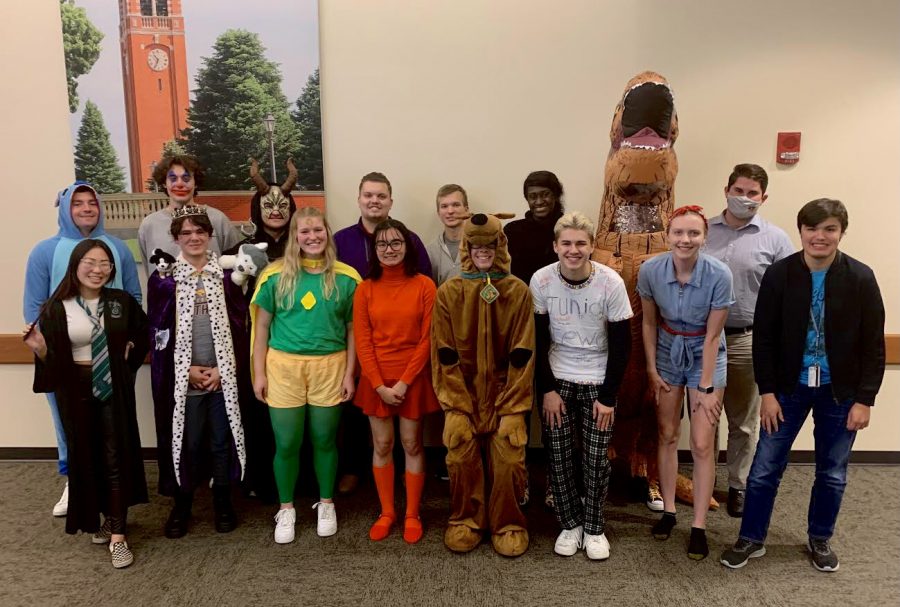 Members of the Senate and Upper Cabinet dressed up in festive costumes to celebrate Halloween at their meeting Wednesday.

Warlocks, dinosaurs and Scooby-Doo, oh my! Channeling their Halloween spirit, the Northern Iowa Student Government (NISG) met in the University Room of Maucker Union clad in costumes on Wednesday, Oct. 27. In their 11th meeting of the semester, Speaker of the Senate Sam Caughron ushered the meeting in with reports from members of the executive branch and the NISG advisor.

Notable highlights from these reports include the report given by Vice President Alissane Struck sharing her work helping to organize the Board of Regents visit on Nov. 4. Vice President Struck asked members for suggestions to add to the agenda of items to be discussed during the visit alongside other work such as the establishment of Juneteenth as a recognized school holiday and the demolition of the Honors College and Alumni House buildings. Advisor Mike Bobelyk also gave a report centering around the renaming of the Office of Student Life to the newly minted Office of Student Involvement and the implications of this change.

The student government members then arrived at their noncontroversial docket consisting of four items of legislation.

The first three items were the appointment of three new at-large senators to bolster the ranks of the NISG.

Madison Duong, first-year business administration major, went first and after fielding a few questions, was confirmed by a vote of 10-0-1. Next came Ty Piper, another first-year student who is majoring in English education. He expressed his desire to use his position to organize a UNI Pride Festival. Piper was voted in by a tally of 11-0-1. Finally, first-year theatre performance major Brody Kivett took to the pulpit to underscore his personable nature as a strength for his membership in NISG. After no debate, Kivett was voted in by a margin of 12-0-1. To round out the noncontroversial docket, the gathered students voted on a Contingency Fund request for $1,000 from the UNI Trombone Society for equipment used in their upcoming, yearly “Science of the Slide” event. It passed by a vote of 13-0-1.

The NISG members were then treated with a second reading of two bills centered around the amendment of NISG by-laws featured in this column last week. The first bill amended the NISG membership clause while the next bill clarified the roles of the Judicial Branch of NISG. Both officially passed by a vote of 13-0-1.

The gathered members then collectively heard the first reading of another amendment to the NISG by-laws. This amendment consisted of clearing up what items on the agenda constitute controversial and noncontroversial as well as reestablishing the position of Chief of Staff, a governmental position that has not been present in NISG for several years.

This reintroduction of the Chief of Staff and their duties caused much debate among the members especially around the date of expiration for the position. The first draft of the bill called for the end of the Chief of Staff’s position to be on April 12, 2022, and for the recreation of the position to subsequently be considered again after this date.

However, Senator Miller motioned to amend the date to one year later to give the position a full year of work at the time of consideration of renewal. This led to a roll-call vote tallying 12-1-1 with Senator Hackbart being the only dissenting vote. With the amendment to the bill passed, it was tabled for an official vote for the next meeting.

NISG meets every week at 8 p.m. on Wednesdays in the University Room of Maucker Union.

These meetings are free and open to the public. Anyone interested in becoming involved in NISG and the activities of the organization can visit nisg.uni.edu for supplemental information or check back in next week’s issue for more ongoing coverage related to NISG, their initiatives and up-to-date organization news.