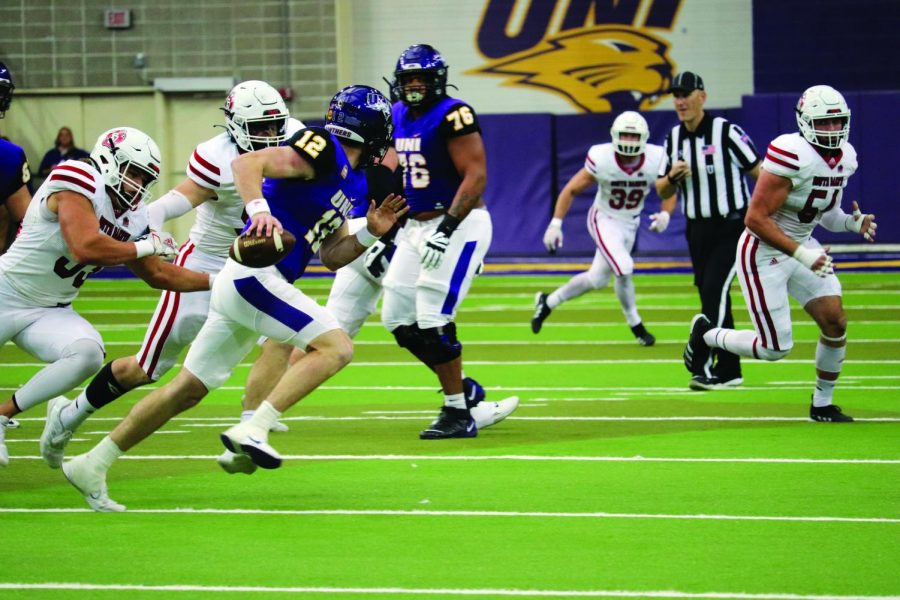 The Panthers faced the third-ranked Southern Illinois Salukis Saturday, coming into the game with a 4-3 record.

Salukis head back to Southern Illinois with tail between their legs: Panthers win 23-16

In a pivotal matchup, the FCS 20th-ranked UNI Panthers faced the third-ranked Southern Illinois Salukis last Saturday in the UNI-Dome. With the FCS playoffs coming soon, both teams needed this win to pad their resumés. UNI came into the game 4-3 after winning another huge top ten matchup the week prior at South Dakota State. However, with losses to ranked teams in the two games prior, UNI needed to get themselves back into a secure position in the playoff field. Southern Illinois was at the top of the Missouri Valley Conference at 6-1 with only one loss to Big 12 team Kansas State. Following a back-and-forth battle inside the Dome, the Panthers came out on top with a 23-16 victory.

“They are an excellent football team and they’ve been scoring tons of points on teams all year long,” UNI head football coach Mark Farely said about Southern Illinois in the post-game press conference. “They have a really good conceptual scheme on offense and they had us reeling a little bit in the first half. But we made adjustments on offense and defense which I thought were tremendous, and it made the difference in the game and how we played in the second half,” he said.

Southern Illinois got things started on its opening possession with a six-play drive that got them to the UNI 26 after a 39-yard pass from quarterback Nic Baker to wideout Avante Cox. A sack from UNI’s Devin Rice pushed SIU back to the 31, from where they made a field goal to go up 3-0 with 12:51 to play in the first quarter.

UNI’s next possession saw quarterback Theo Day throw an interception, but the UNI defense held strong and got the ball back. A Saluki unsportsmanlike conduct penalty got the Panthers a first and goal opportunity, but UNI couldn’t punch it into the endzone, settling for a 38-yard Matthew Cook field goal to tie it up at 3 at the 5:35 mark.

After several pointless drives for each team, Southern Illinois struck with a 52-yard touchdown pass from Baker to Landon Lenoir to go up 10-3. Southern Illinois’s next drive saw them move down the field through quick passes and tack on a field goal with 4:25 left in the second quarter.

After trading punts, UNI got the ball back with limited time to work with. They capitalized on that opportunity, getting it to the Southern Illinois 15 for a Cook field goal just before halftime to make it a seven-point game at 13-6.

The Panthers came out of halftime looking to score. After receiving the ball to start the second half, running back Bradrick Shaw broke loose for a 38-yard run to the Southern Illinois 37. After a few short plays, Day found Sam Schnee for a 19-yard touchdown pass to tie the game at 13 with 10:58 to go in the third. Southern Illinois settled for a field goal on their next possession to take a 16-13 at the 9:11 mark.

The Panthers’ bounced back on their next drive. It ended with a Day touchdown pass to tight end Kyle Fourtenbary with 2:49 to go in the third. UNI led 20-16 and would not relinquish the lead.

After a Southern Illinois punt, Day threw his second interception, but just two plays later, Baker overshot his intended receiver, right into the hands of UNI’s Benny Sapp III for another Panther interception. Shaw was stopped short on fourth down and gave the ball back to SIU. On the verge of scoring, Baker’s pass was batted at the line of scrimmage and intercepted by the Salukis’ next drive saw them turn it over on downs, and UNI tacked on a field goal with 2:27 to go in the fourth. UNI held off Southern Illinois, who had it first and goal at the nine, in the closing moments, and won by a final score of 23-16.

“They’ve found another gear for how to play. They’re playing four quarters of football and they’re playing with a lot of pride as a group. I think that’s been the biggest change,” said Farely about his team. “I think to win these kinds of games, you really have to reach deep and find that pride, especially considering who we were up against,” he added.

Up next, the Panthers face an unranked Illinois State team on Saturday, Nov. 6, at 12 p.m. in Normal, Ill. They will return to the UNI-Dome on Nov. 20 against Western Illinois for Senior Day.