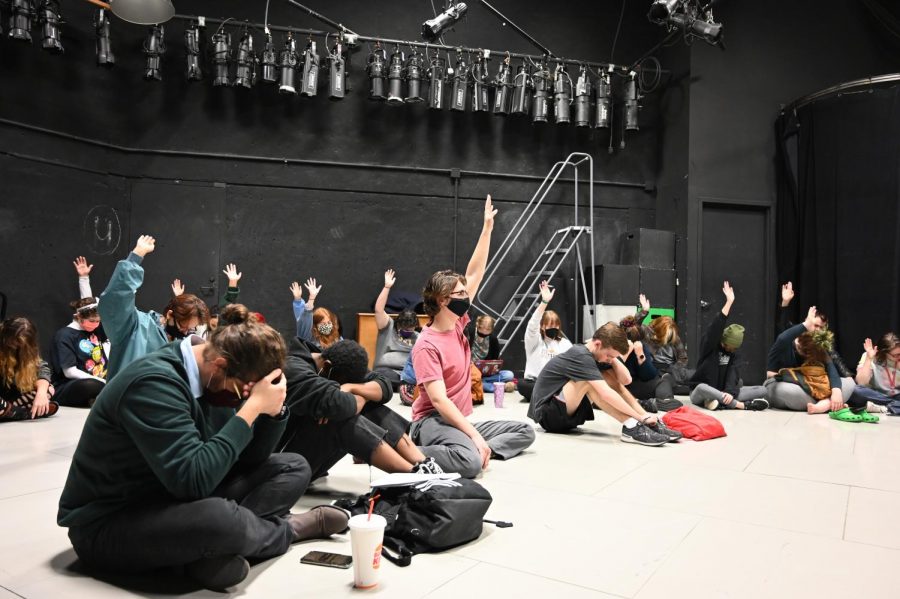 In response to budget cuts and low faculty numbers, students vote at a meeting to create a group advocating for theatre.

After 143 years on campus, TheatreUNI will be facing possible closure and program suspension due to a university funding crisis. On Wednesday, Nov. 3, faculty and students in the UNI Theatre Department held an emergency meeting to discuss the future of the department and the funding issues within the department.

“We’re stressed, we’re fatigued, we’re upset and we’re uncertain about the future,” Department Head and Associate Professor of Theatre Eric Lange said. “To actually waive some requirements for students, that’s not easy. I mean, that’s not something we just do casually.”

Due to a hiring freeze within the department, the Drama and Theatre for Youth Emphasis will no longer be accepting new applicants.  As a result, this program will be suspended. Drama and Theatre for Youth is designed to teach theatre professionals who work with professional theaters and assist with  education or youth-centered programming. Any students who are midway through the current program will be waived or accommodated with a replacement class to finish with their education.

The second decision discussed during the meeting was a reconstruction in the Communication-Theatre-Teaching curriculum.

Although the program will not be eliminated, credit hours may be reduced.

The third decision discussed is the discontinuation of  the the Sturgis Youth Theatre program, founded by Gretta Berghammer. The mission of the program is to provide young people with an opportunity to explore and experience all aspects of theatre. According to TheatreUNI, “In 2011 the Sturgis Youth Theatre expanded in order to offer programming for students on the autism spectrum. Spectrum Theatre is offered during the academic year on a variety of Sunday afternoons.” The decisions to discontinue these programs were presented to the faculty two weeks prior to the emergency meeting.

After these decisions were announced, many students voiced their concerns.

Fifth year theatre performance major Liz McRae said, “Gretta Berghammer and the legacy she has built is a cornerstone of theater in the Cedar Falls and Waterloo community. To eliminate everything that she built as the first female department head here at UNI is an incredibly shameful and short sighted decision.”

Many students shared tears and expressed fear for the future as the department may lose accreditation from the National Association of Schools of Theatre (NAST). The accreditation is an external set of basic criteria for its programs and recognizes the ability to provide a base of academic strengths and operations.

In response to these decisions, students from the department  gathered together in the basement of the Strayer-Wood Theatre Thursday, Nov. 4 to discuss some next steps and advocate for their department.Multicultural Theatrical Society (MTS) President Bre Eigenheer, University of Northern Iowa Theatre Association (UNISTA) President Dani Schmaltz, Alpha Psi Omega (APO) President Allie Klinsky and University of Northern Iowa Theatre Technicians (UNITT) President Justine Williamson led the conversation regarding the future of TheatreUNI. All students voted (28-8-0) to establish a union known as the UNI Theatre Education Defenders (UNITED) to be organized by the four presidents of the theatre organizations to be the main executive team.

“Our work extends so far beyond UNI’s campus,” drama and theatre for youth and performance major Dani Schmaltz said. “We are so heavily involved with the Cedar Falls, Waterloo community and the community school districts. So when you take (these programs)away, it not only reflects badly on our program, but on the alums that are going to come out of here. We could lose our NAST accreditation. We most likely will because we won’t have a third track, which is essential. Reputation wise, I will be impacted by this, as well as all the people that I know need to be a part of this work. All of the potential jobs that I could have in this area are going to be squandered now, because those connections don’t exist anymore.”

UNITED is fully prepared to keep their work going. Schmaltz welcomes everyone to advocate for the arts in higher and public education. UNITED invites all UNI students to their next meeting on Nov. 17 at 6 p.m. in the Strayer-Wood basement. For more information, email [email protected]uni.edu.

For an update on this story visit: ‘Theatre is not going anywhere’