Panthers come up short in season opener vs Nicholls State 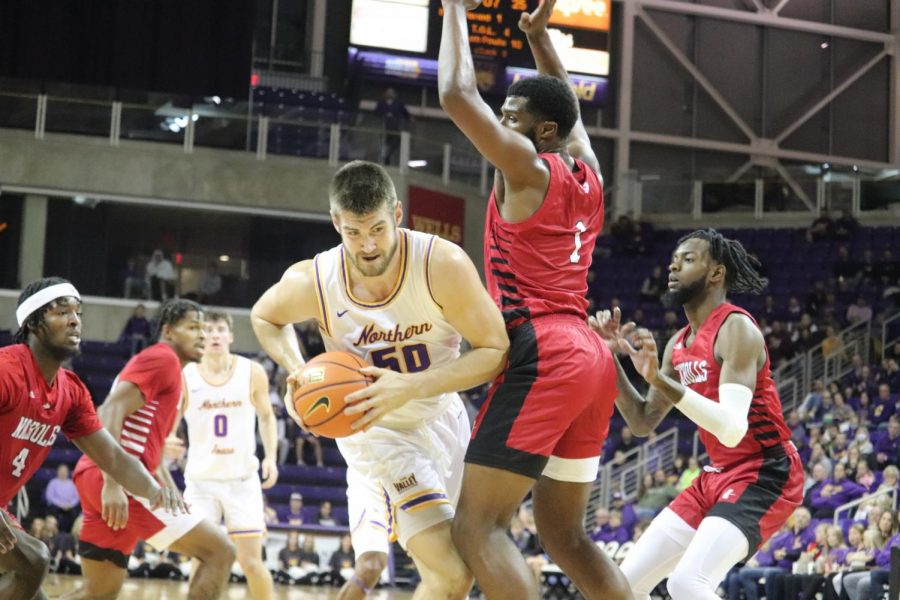 The Panthers fell in their 2021-22 season opener to Nicholls State by the score of 62-58. Austin Phyfe lead UNI in scoring with 20 points.

After what many would consider a disappointing 10-15 season in 2020-21 that included the loss of star player A.J. Green after the third game of the season, the UNI Panthers men’s basketball team got the 2021-22 season started on Tuesday. The Panthers hosted the Nicholls State Colonels at the McLeod Center to open the season. The Colonels were no slouch a season ago, winning the Southland Conference regular season championship and enter this year as favorites to repeat. The Panthers couldn’t get the win in their season opener, falling to the Colonels 62-58.

The Panthers got off to a fast start, taking an early 13-4 lead by knocking down shots as well as putting in a strong defensive effort. However, around the midway point of the first half, the UNI offense went cold. This allowed the Colonels to go on an 11-0 run and take their first lead of the night at 15-13. Panthers center Austin Phyfe responded with his own 6-0 run to give the lead back to UNI at 19-15. This was part of a 15-point first half for Phyfe, but the Colonels stuck around as the teams went into the locker rooms tied at 27.

The start of the second half was much like the end of the first, with neither team able to get any separation from the opposition. After a three-pointer from Phyfe via a smooth behind-the-back assist from Green gave the Panthers a 37-35 lead, both teams went cold, going scoreless for several minutes. After a slow start in his return, Green finally got on the board with seven minutes to play, knocking down a pair of free throws to tie the game at 44. The Colonels answered with an 11-0 run, taking their biggest lead of the night at 55-44. The Panthers put in a good effort late, nearly coming all the way back. Ultimately, UNI fell just short, losing by a final score of 62-58.

Phyfe was the leading scorer for the Panthers, finishing with 20 points, as well as the leading rebounder, pulling down nine boards.

It was a rough return for Green as the MVC Preseason Player of the Year finished with four points, making one of his 14 shot attempts including missing his first 13. In spite of a rough performance, his teammates still have plenty of faith in Green.

“We have all the faith in the world in him. That man puts in more work than anyone I’ve known in my entire life,” said senior guard Trae Berhow after the game. “I can almost promise you guys that A.J. Green will not let that happen again,” Berhow said when informed that Green had missed his first 13 shots.

With the loss, the Panthers fall to 0-1 on the season. It’ll be a quick turnaround for UNI, as they return to action on Thursday, Nov. 11, hosting the Vermont Catamounts at 5 p.m. The Panthers will also be at home on Sunday, Nov. 14, hosting the Dubuque Spartans.